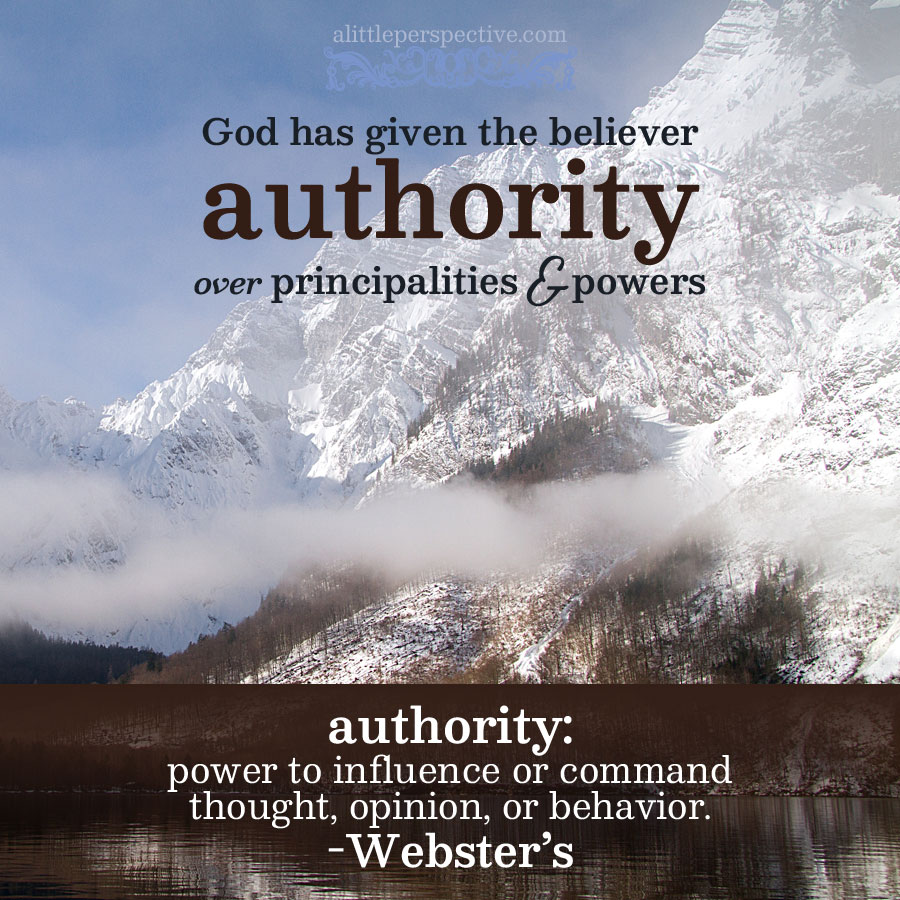 The reason we can pray successfully against the principalities, powers, and spiritual forces of wickedness in heavenly places, who exert influence for evil in this world, is that Jesus has triumphed over them and has authority over them.

And Jesus came and spoke to them, saying, “All authority has been given to Me in heaven and on earth.” Mat 28:18

Therefore God also has highly exalted Him and given Him the name which is above every name, that at the name of Jesus every knee should bow, of those in heaven, and of those on earth, and of those under the earth, and that every tongue should confess that Jesus Christ is Lord, to the glory of God the Father. Phi 2:9-11

… and you are complete in Him, who is the head of all principality and power. Col 2:10

Having disarmed principalities and powers, He made a public spectacle of them, triumphing over them in it [the cross]. Col 2:15

And He has commanded us to use His authority in His name, to do as He did: do good, heal the sick, and deliver all those oppressed by the enemy.

You are of God, little children, and have overcome them, because He who is in you is greater than he who is in the world. 1 Joh 4:4

And they overcame him by the blood of the Lamb and by the word of their testimony, and they did not love their lives to the death. Rev 12:11

… how God anointed Jesus of Nazareth with the Holy Spirit and with power, who went about doing good and healing all who were oppressed by the devil, for God was with Him. Act 10:38

Someone who is suffering from bitterness, depression, suicidal thoughts, and paralyzing fear are often times the victim of oppression. A spirit of bitterness, or depression (the Scriptural term is “heaviness,” Isa 61:3), or fear, are often the originators of the thoughts which generate feelings of bitterness, despair, or anxiety in a person.

(I am not talking about demon possession, which is an entirely different thing altogether! I am talking about being shot at with fiery darts — lying thoughts –, which, if we do not know the truth, can slip in and appear as our own thought in the register of our minds. These thoughts then, if believed, produce a corresponding emotion in the heart.)

The principalities and powers are the root cause of the oppression. We direct our fighting energy against the root cause (the people in our lives are not the root cause) being clothed with the full armor of God as our defense, and taking up the sword of the Spirit, the word of God, as our offensive weapon against them, in prayer, with authority, in the name of Jesus.

Stand therefore, having girded your waist with truth, having put on the breastplate of righteousness, and having shod your feet with the preparation of the gospel of peace; above all, taking the shield of faith with which you will be able to quench all the fiery darts of the wicked one. And take the helmet of salvation, and the sword of the Spirit, which is the word of God; praying always with all prayer and supplication in the Spirit, being watchful to this end with all perseverance and supplication for all the saints— Eph 6:10-18

Do not be afraid of principalities and powers! The only power they have now, is the power we give them when we put faith in their lying words. Believe the truth! ♥

Eph 6:10-18, the whole armor of God
Open our eyes
Warfare for your house
Sweeping the house clean
Praying for our children
Victory over possession
Victory over oppression