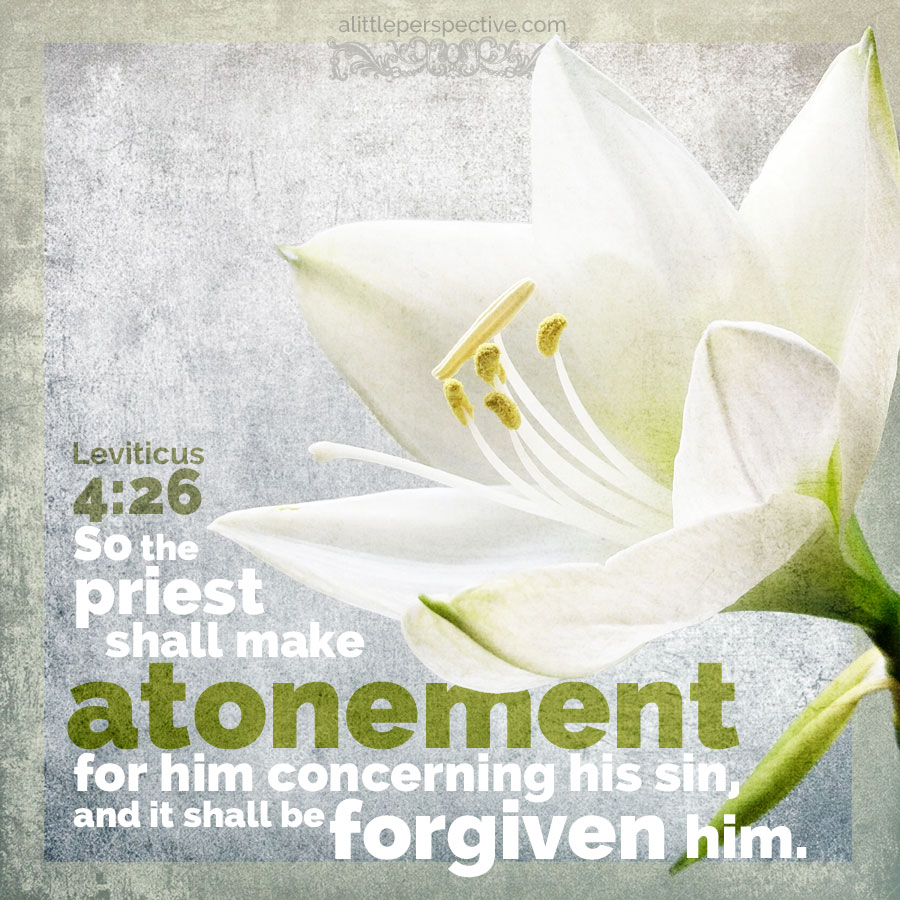 Read Leviticus 4 and 5 at Bible Gateway.

1a) Lev 4:1-2, If a person sins unintentionally against any of the commandments of the Lord;

1c) Lev 4:3b, Bringing guilt on the people, then let him offer to the LORD a sin offering, a bull without blemish;

1d) Lev 4:4-12 {p} The priest shall lay his hand on the bull’s head, and shall sacrifice the bull of the sin offering;

1) Lev 4:4, He shall lay his hand on the bull’s head, and kill the bull before the LORD;
2) Lev 4:5, The anointed priest shall bring some of the bull’s blood to the tabernacle of meeting;
3) Lev 4:6, The priest shall sprinkle the blood seven times before the LORD, in front of the veil of the sanctuary;
4) Lev 4:7a, The priest shall put the blood on the horns of the altar of sweet incense before the LORD;
5) Lev 4:7b, He shall pour the remaining blood at the base of the altar of the burnt offering;
6) Lev 4:8-10, He shall take from it the fat as the sin offering + peace offering/ burn it on the altar of burnt offering;
7) Lev 4:11-12 {p} But the bull’s hide +flesh he shall carry outside the camp/ burn it on wood with fire;

central axis) Lev 4:13-14, “Now if the whole congregation of Israel sins unintentionally, and the thing is hidden from the eyes of the assembly, and they have done something against any of the commandments of the LORD in anything which should not be done, and are guilty; when the sin which they have committed becomes known, then the assembly shall offer a young bull for the sin, and bring it before the tabernacle of meeting;”

2d) Lev 4:15-21, The elders shall lay their hands on the bull’s head, and the priest shall sacrifice the bull of the sin offering;

1) Lev 4:15, The elders shall lay their hands on the bull’s head, and it shall be killed before the LORD;
2) Lev 4:16, The anointed priest shall bring some of the bull’s blood to the tabernacle of meeting;
3) Lev 4:17, The priest shall sprinkle it seven times before the LORD, in front of the veil;
4) Lev 4:18a, He shall put the blood on the horns of the altar which is before the LORD;
5) Lev 4:18b, He shall pour the remaining blood at the base of the altar of burnt offering;
6) Lev 4:19-20, He shall take all the fat + burn it on the altar/ so the priest shall make atonement + it shall be forgiven;
7) Lev 4:21, Then he shall carry the bull outside the camp, and burn it as he burned the first bull;

2b) Lev 4:22-26 {p} When a ruler has sinned unintentionally against any of the commandments of the LORD;

2a) Lev 4:27-35 {p+p} If anyone of the common people sins unintentionally against any of the commandments of the LORD.

Sin offering is in Hebrew, chattath, and is from the root word for sin, “to miss the mark.” The picture the ancient pictographs are painting, is of an arrow being shot at a target, only the target is the LORD’s commandments or Torah. If the target is missed, that is chata, sin. A chattath is brought when it is discovered that a chata has occurred.

The chattath was a mandatory offering brought by a man who is not in right relation with God, because of sin. A man in this state cannot bring an olah, minchah, or shelem. He must first bring a chattath to restore his relationship with God, then he may bring voluntary offerings again.

Please notice that a common theme of the law of the sin offering is that it is provided to restore a man after an unintentional, not malicious or willful, sin; and when the priest offers the sin offering, “the priest shall make atonement for them, and it shall be forgiven them,” (Lev 4:20, 4:26, 4:35).

The Law or Torah was given to God’s people who had lived their whole lives in pagan Egypt. It not only taught His people who YHVH is, what righteousness and sin is, what justice looks like, what love looks like, but also provided for mercy (as in the law of the ark of the covenant and the mercy seat) and forgiveness (as in the law of the sin offering) when that righteousness and that justice was transgressed. Is the God of the Old Testament the vengeful and wrathful God while the God of the New Testament is the loving and forgiving God? That is not what Scripture is teaching us!

This break in pattern draws our attention. Moreover it occurs three times, and three is a sign of Messiah in the Hebrew Scripture. The Hebrew word “Messiah” means “anointed.” Torah is proclaiming that when the one who is anointed – Messiah — makes atonement for sin, sin shall be forgiven him!

The 5th offering Scripture teaches us about, is the trespass offering or guilt offering.

The first question I asked myself, is why is there a difference between the sin offering and the trespass/ guilt offering? Not only is there this evidence in Torah that Scripture is talking about two distinct things, but it also says:

A trespass is a specific type of sin, when any injury or offense is done to another (Webster’s 1828 again).

We can see the injury or harm done to another borne out in Leviticus, in that trespasses involve oaths that are not performed (Lev 5:1, 4; the one to whom the promise is made is injured when the promise is not kept); or property is stolen (Lev 6:1-3). In these cases, restitution to the injured party is also required (Lev 5:16, 6:4-5).

Now it is interesting that the LORD considers touching an unclean thing a trespass; i.e. injury done to another (Lev 5:2-3). Who is being injured? Why, the one doing the touching, of course! God not only does not want us to injure our neighbor, He also does not want us to injure ourselves. The distinction between clean and unclean is in Torah to promote our physical health and well- being, not just to burden us with commandments!

Scripture also teaches us that it is a trespass when a person violates any of the LORD’s holy things. What is a holy thing? Whatever the LORD has declared and set aside as holy, is His holy thing (“holy” simply means “to be set apart”):

Her priests have violated My law and profaned My holy things; they have not distinguished between the holy and unholy, nor have they made known the difference between the unclean and the clean; and they have hidden their eyes from My Sabbaths, so that I am profaned among them. Eze 22:26

Someone trespasses against the holy things of the LORD when they profane them, or treat what is set apart as if it was common and ordinary. Then it is the LORD who has been injured, in the same way that a man who robs from his neighbor injures his neighbor (Mal 3:8). That is why Scripture commands the man who has trespassed in the LORD’s holy things, to add with his trespass offering, the valuation in shekels of silver to make restitution (Lev 5:15-16).

Trespass offering is in Hebrew, asham, with its root, aleph + shin + mem. The shin or two front teeth, thus also the breath that comes through the teeth, so also, wind, or spirit, coupled with the mem or water, paints a picture of wind blowing over a land, drawing the moisture out of it as it does so, and leaving behind a desolate ruin. The aleph is the ox head or power, strength. So the story the ancient pictographs are telling of trespass, is powerful desolation – the fruit wrought in our hearts and lives by trespassing. In our culture we treat sins and trespasses so lightly, as if they are things of barely any consequence. And yet they wreak powerful desolation.

Please do not miss, that regardless of the difference between sin and trespass, the end result of both the sin offering and the trespass offering is that atonement shall be made for him, and his sin or trespass shall be forgiven him!