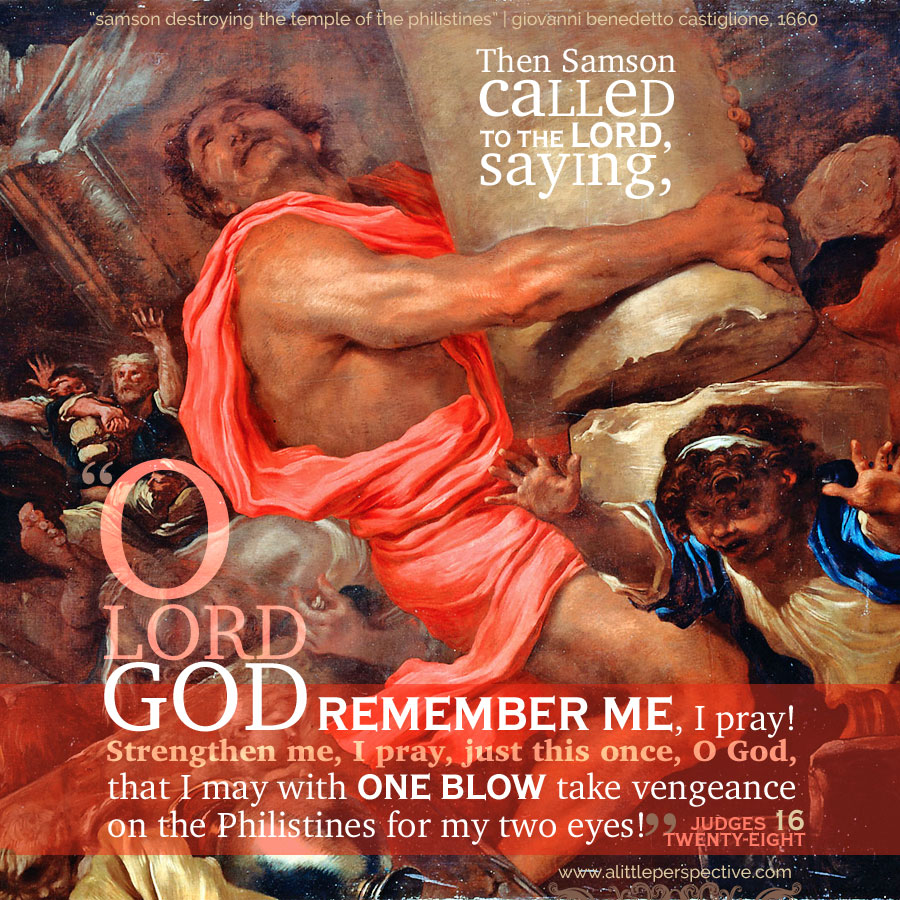 Read Judges 15 through 17 at Bible Gateway.

The whole history of Samson is a study in how not to conduct interpersonal relationships between men and women.

The first lesson yesterday was, Be loyal to the spouse you choose.

When Samson left his wedding in wrath, and returned to his father’s house, apparently the Philistine woman’s father betrothed her to another man, Samson’s best man, but they had not been married yet, for the woman was still living in her father’s house at the time of the wheat harvest (late May or early June) when Samson came to visit her. Her father had annulled her marriage to Samson when he left without her and she had to return to her father’s house to live.

Don’t expect things to get better by running away from the problem!

Communication will prevent even greater misunderstandings.

Samson takes his anger against the Philistine woman’s father out on the Philistine nation’s harvest. The Philistines retaliate by murdering the father and daughter both. It seems that burning alive was a common practice of the ancient pagans, for it keeps coming up in the narrative. But Samson attacked them with a great slaughter, then headed for Judah to hide, since he was now a fugitive. Judah turned him over to them, but Samson slew 1000 of them with a donkey’s jawbone. God brought water for him out of the rock, just as He had done for Moses. Then the Philistines left him alone, as they saw they could not prevail over him. And he judged Israel 20 years.

God will use imperfect people in amazing ways!

Samson’s besetting weakness was inappropriate women. He perhaps was so confident in his strength from the Lord, as evidenced by how easily he escaped the trap laid for him at Gaza, that he let slip common sense and wisdom, in making choices. Delilah dwelt in the Valley of Sorek, an important valley in central Israel, with Zorah, where Samson was from, on the north, and Timnah on the south. All but Gaza were Israelite cities and places (although Gaza had been given to Judah, if they would possess it), and that Philistines dwelt in them shows how completely the Philistines ruled over Israel. We don’t know if Delilah was a Philistine herself, but that the five lords of the Philistines came to her to make a bargain with her shows that she might have been.

Don’t sleep with the enemy!

A woman who manipulates with weeping and nagging to get her way will not be a comfortable helpmate.

And seriously, if a woman sells you into the hands of the enemy, not once, but three times (it matters not if you were able to escape), she is trying to hurt you. Do not tell her what is in your heart so that she can use it as a weapon against you. A woman who is a gift from God will do you good, and not harm, all the days of your life.

In the beginning of chapter 14, Samson’s parents had the right of it, when they asked him, Is there not a woman from among your own people? If only he had listened to their wisdom! But he went with the impulsiveness of his flesh instead of repenting of it. He could have asked God to provide him with His choice for a helpmate, and I am sure God would have answered him. Be that as it may, God allowed Samson the free exercise of his will, although Samson’s foolish choices cost him blessing and happiness in this life. Here is the chiastic structure for chapter 16:

central axis) Jud 16:21-22 {p} The Philistines bound Samson, put out his eyes, and imprisoned him in Gaza;

2c) Jud 16:23-24, The Philistines celebrate that Samson was delivered into their hands;