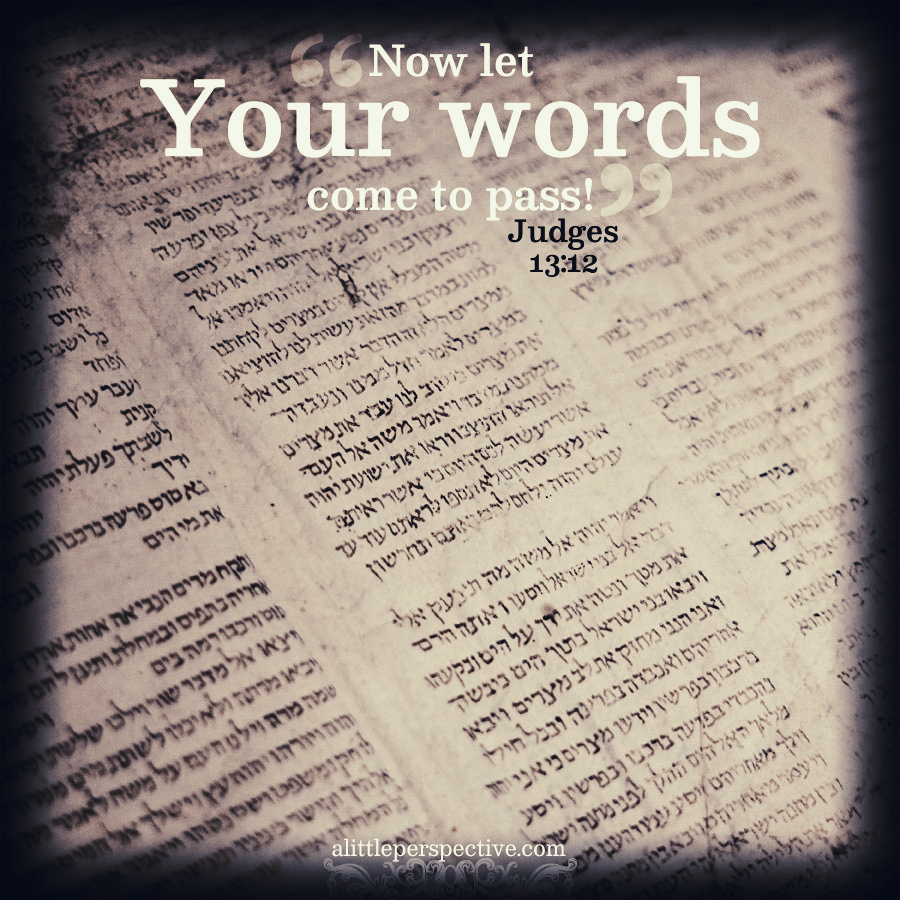 The Hebrew paragraph divisions in today’s chapters are:

Samson is set apart to God from birth as a Nazirite. The law concerning Nazirites is found in Num 6. “Nazir” in Hebrew means “separate, consecrate.” A Nazirite is someone who makes a vow to God, to be set apart to Him for a certain season, and during that season they do not cut their hair or drink wine; and at the end of the season, when they have completed their vow, they shave the hair of their head, and bring an offering, then they are released from their vow. The purpose of the vow is to draw near to God.

(Please do not confuse “Nazirite” with “Nazarene,” a man of the town of Nazareth. In Hebrew, the words are not related, however “Nazarene” has its own Messianic significance, which we will get to …)

So God declared Samson to be set apart to Him from birth, and the mark of Samson’s consecration is his unshorn hair. His great strength is a supernatural gift to him from the Holy Spirit, as long as he remains in his consecration.

Samson has a character flaw, however: he is impulsive. He wanted what he wanted, when he wanted it, and he did not think it through. The Scripture says the matter with the Philistine woman was from God, in order to find an occassion of war with them, so that Israel can be freed from the Philistine yoke (Jud 14:4). But God in His great wisdom, took Samson’s impulsiveness, his weakness, into account, and worked through him, weaknesses and all, to accomplish His purpose. He knows our frame, that we are but dust! Our gracious Father’s goodness to us is so great!

The chiastic structure of Samson’s wedding:

1a) Jud 14:1-5a, Samson went down to Timnah + requests a Philistine woman for his wife;

1c) Jud 14:14-15, They cannot answer the riddle and threaten Samson’s wife to obtain the answer;

2c) Jud 14:18, They answer the riddle and Samson discerns they obtained the answer through his wife;

She should have told her husband the threat she was under, instead of going along with their plan against Samson. By her actions, she let Samson know that her loyalty was with her nation and not with her husband. But what did he expect? He chose his wife based on her appearance and not on her character. See? Impulsive.

That is the entire record of the Spirit of the Lord until Samson. You might say the baptism of the Spirit, with gifts and signs following, is not new with the New Testament, but it is true, and these instances in the Old Testament teach us much about His work and operation, if we will study it.

One last point I want to bring out. In Jud 14:5b-6, Samson kills a young lion with his bare hands, who had rushed upon him without warning. He accomplishes this feat by the Spirit of the Lord. On a literal level, it would require supernatural strength to do such a thing, for such a thing was not heard of; when a lion rushed upon an unarmed man, it was the man who was killed, not the other way around. Leaving aside for a moment the spiritual application, that the enemy prowls around us like a roaring lion, seeking whom he may devour, and that by the Spirit of the Lord he is defeated, there is only one other record from the ancient world of a man slaying a lion without a weapon: and that is Hercules, whose first of twelve legendary labors was to slay the Nemean Lion without a weapon, since the lion had magical fur which was impervious to weapons.

According to Ussher, 1137 BC is the year of Samson’s dispute over his Philistine bride. According to the encyclopedia, 438 BC is the earliest production of Euripides’ plays, the Greek writer who provides us with the first written record of the legends of Hercules. I submit to you that Samson is the original hero and deliverer, whose strength was so great, that he passed into legend. The Greeks heard of a great hero with supernatural strength, who had slain a lion with his bare hands, and they borrowed this bit of biblical history (as they did in so many other instances) and made him a Greek hero instead. When the modern critics try to tell you that the history of Samson is a late Hebrew copy of a Greek myth, you can tell them that they have it exactly backwards, for the Greeks copied all their mythology from other sources, as Herodotus is not shy to point out.