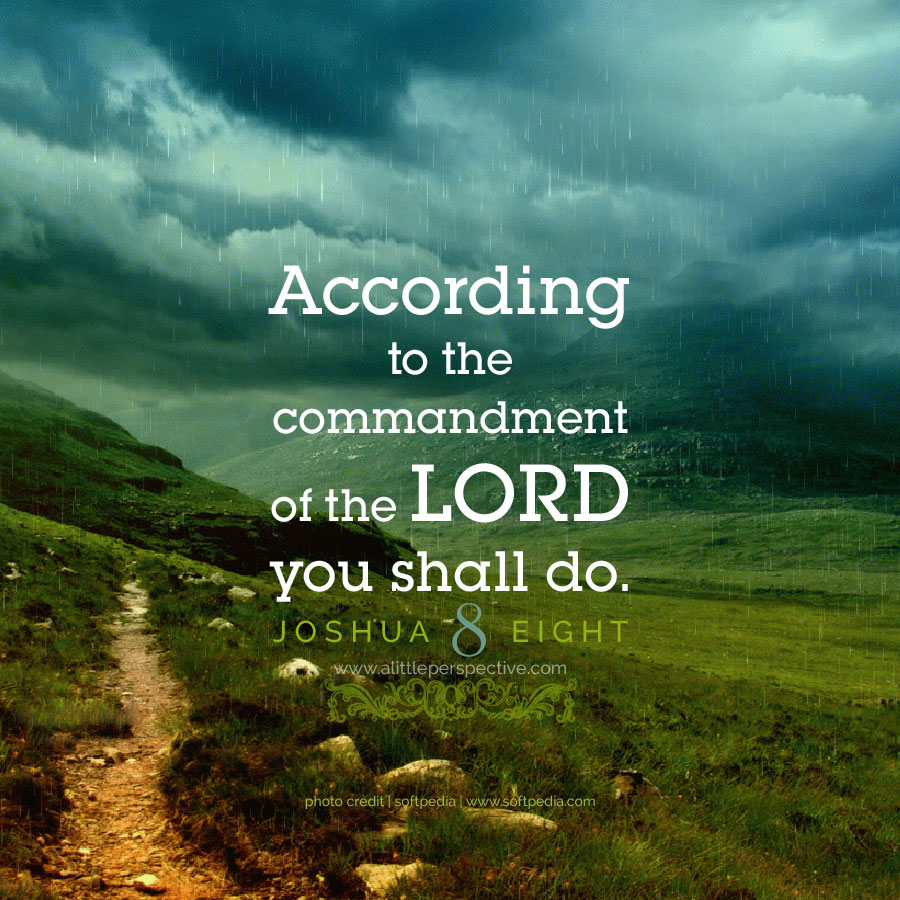 Today we read about Achan, who took the accursed, or devoted, things (Jos 7:1). Everything that was in the city of Jericho was devoted for destruction, except the metal treasure, which belonged to the LORD and which was to go into the treasury of the LORD for the Tabernacle.

The word translated devoted can have a positive meaning or a negative meaning (as can all Hebrew words).

This is its positive meaning: an offering (or anything) which a man dedicates to the LORD, is from that day devoted or holy (set apart) to the LORD. That thing belongs to the LORD God now and shall be treated as such.

So none of the accursed things shall remain in your hand, that the LORD may turn from the fierceness of His anger and show you mercy, have compassion on you and multiply you, just as He swore to your fathers, Deu 13:17

This is the same word in Hebrew, but in its negative meaning. Idols or possessions of a town which has turned from the LORD and served idols, shall be gathered in the center of the city and burned entire, because those things have become devoted to the LORD for destruction. It is likewise set apart to the LORD just like the offering is, however since it is an accursed thing, it is set apart to the LORD for destruction. It also cannot be possessed by man because it is devoted.

So the man took for himself, that which had been devoted to the LORD: the garment, devoted to destruction, and the silver and gold, devoted or set apart for the treasury of the LORD. He trespassed against the LORD’s holiness.

Why was this such a big deal? The livestock and spoil of Ai was fine for Israel to keep for themselves – why not the things of Jericho?

Jericho was the first city of the Canaanites which Israel encountered. It was like a firstfruits offering to the Lord. Moses had commanded that when they harvested their fields, they were not just supposed to eat everything they harvested, but they were to take the first of the fruit which the harvest produced, and give it to the priests for the Lord. The firstfruits was set apart or holy to the LORD; i.e., it belonged to the LORD and not to the man who owned that field.

Well, Jericho was the first of all the cities of Canaan. It was devoted to the LORD for complete and utter destruction (its negative meaning), just as a firstfruits offering is devoted to the Lord for the priests (its positive meaning). That is why keeping the spoil of Jericho would bring a curse. It is a more serious offense than just coveting a few things.

Remember that Ananias and Saphira in Acts were struck dead for lying to Peter about the thing that they had devoted to the LORD? (Act 5:1-11). The church at Jerusalem was the first of the churches throughout the whole earth. It was the LORD’s firstfruits. God was and is very zealous for the holiness and purity of His first things.

As a result of the death of Aninas and Saphira, “So great fear came upon all the church and upon all who heard these things,” (Act 5:11). You may be assured that this happened in Israel also after the death of Achan. Achan’s punishment may seem harsh, but his actions caused the death of 36 men unnecessarily, and those 36 wives and their children were now widows and orphans in Israel. Shall we not have pity on their suffering? God commands special protection and regard for the weak and vulnerable, and takes their abuse very seriously indeed. This is why I tremble in great fear thinking of those who abuse and enslave children heartlessly for profit. The wrath of God against all sin is great, but I cannot imagine how great a vengeance they are storing up for themselves, unless they repent.

Now that the firstfruits of Canaan — Jericho — had been given to the LORD, the men had permission to take the spoil of Ai for themselves. There was nothing wrong with Israel having things. Achan’s sin was keeping the LORD’s devoted things. If only Achan had waited! God did not reveal this bit of information to Israel beforehand, however. He asks us to trust Him in faith, and out of that trust, to obey Him, Amen?