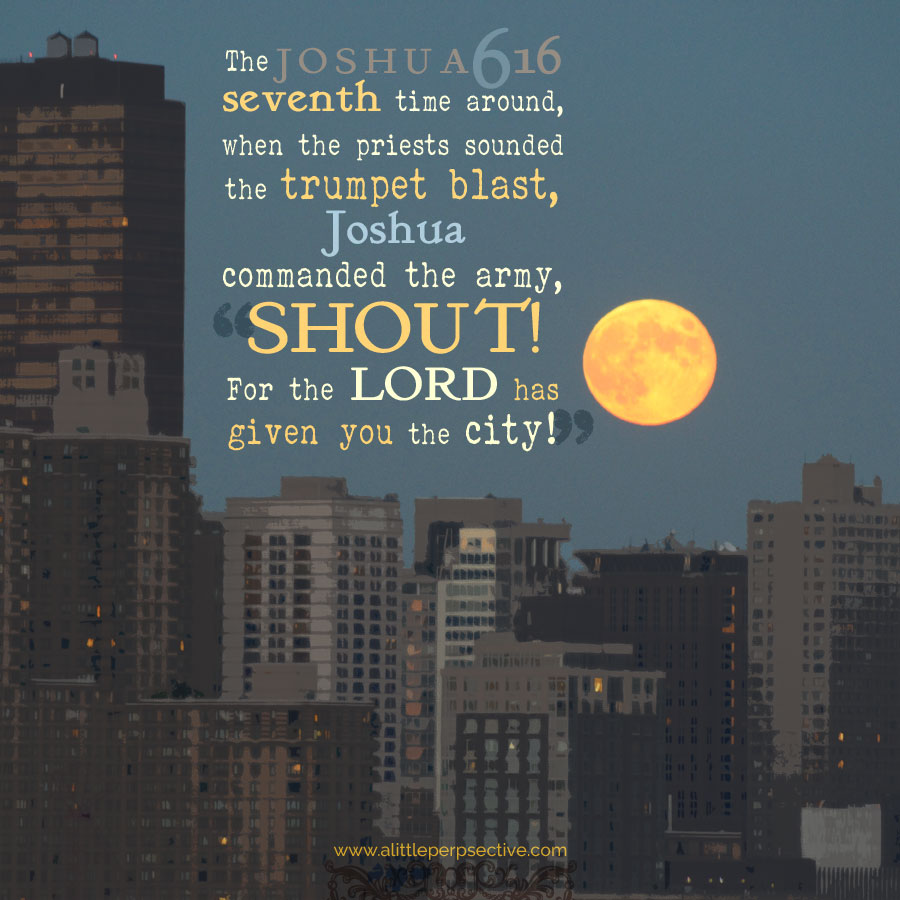 Read Joshua 5 and 6 at Bible Gateway.

These chapters in Joshua are teaching God’s people, if we will hear them, how to achieve the victory God has promised us. Now Joshua and all Israel were walking in all the LORD’s commandments. They followed the pillar of cloud by day and fire by night faithfully, to the edge of the Promised Land. So what do they encounter? OBSTACLES!

Israel’s victory over the waters of the Jordan was followed immediately by another obstacle: the walls of Jericho.

“Now Jericho was securely shut up because of the children of Israel; none went out, and none came in.” Jos 6:1

Jericho was a strongly fortified city of the Canaanites. There was an inner wall, surrounded by an earthen embankment, and an outer wall made of mud bricks, which acted as a retaining wall for the earthen embankment. There were also large stores of grain in the city from the recent barley harvest. The city was prepared to endure a long siege behind its strongly fortified walls.

How was Joshua going to overcome this obstacle? He did not know, until the Commander of the LORD’s army (a pre-incarnate appearance of the Lord Jesus – not an angel, for He received Joshua’s worship, which angels do never do) told him the battle plan. At the shout of Israel on the 7th day, the outer retaining wall fell down outward, forming a ramp, which allowed the Israelites easy access up and over the earthen embankment and inner wall.

We can be completely following God’s will for our lives in every particular, and still run into obstacles. In fact, God might be leading us to those obstacles on purpose! When He miraculously demolishes that obstacle, His name receives glory, and our faith is strengthened! And just perhaps, it is a sign to the unbelievers around us that God is with us, so that their heart melts within them, and the things in which they trusted, are revealed as a vain vapor.

It is a good thing to meet obstacles with praise and thanksgiving to our good and generous Father! Obstacles in front of us are not obstacles in front of Him, but rather, opportunities to reveal His mighty hand and awesome power! But don’t assume the strategy for victory. Get in the Lord’s presence and receive His strategy for victory that He wants to give you. It might seem far-fetched, but it will overcome the obstacle!

It is not a coincidence that Israel’s victory coincided with the seventh day, the Sabbath, and the Feast days.

For further reading:
Jericho: Does the Evidence Disprove or Prove the Bible?