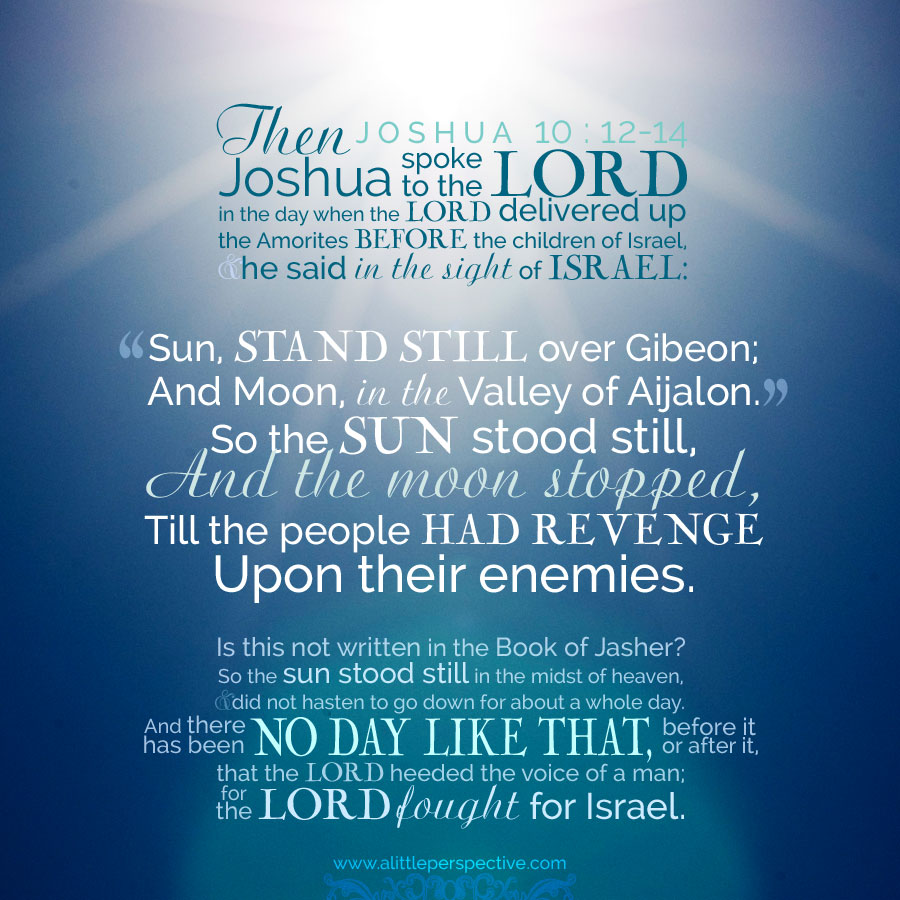 Read Joshua 9 and 10 at Bible Gateway.

The Hebrew paragraph divisions for Jos 7-10 are:

The political organization of Canaan was in the form of city states: seven nations (tribes or families) of Canaanites dwelt in the land; each nation’s population was concentrated in a number of fortified cities, with smaller villages and towns surrounding them, who looked to their fortified city as the seat of political power and authority. Each fortified city had its own king, who ruled that city and its villages. Thus each city was like its own independent state, responsible for its own government and laws. Alliances were made with other city states as needed, but there was no formal organization of the nations of Canaanites into one nation of Canaan.

Jericho was the fortified city at the Jordan, at the entry point to Canaan. When Israel destroyed it, they formed an encampment for themselves at Gilgal, a foothold in the land. The fortified city of Ai was a close neighbor. When Israel destroyed it, they had conquered the two strongest fortified cities of central Canaan with their kings. Even though the surrounding villages and smaller towns which owed allegiance to Jericho and Ai still existed, with their intact population of Canaanites, the organized government and political power which had the authority to resist them with armies, was gone. Therefore, even though there was work left to do to rid central Canaan of Canaanites and idolatry, Joshua completed the political conquest of central Canaan.

Now Gibeon was a fortified city in the plain of central Canaan. They tricked Israel into making an alliance with them, something Israel had been forbidden to do. But notice that Israel neglected to ask the LORD what He thought of the Gibeonites before completing the alliance? Like the first battle of Ai, they proceeded on the strength of their own wisdom.

Now five kings from southern Canaan, from the nation of the Amorites, one of the seven nations of Canaanites, heard of the alliance Gibeon had made with Israel, and, rather than attack Israel directly, they joined together to attack Gibeon. Joshua marched to Gibeon’s rescue, and the LORD fought for Israel in defeating this alliance of the five kings of the Amorites. More of the army of the Amorities died of hailstones than by the sword, and God delayed the setting of the sun so that Israel could finish their complete slaughter of the allied army outside of Gibeon.

“Then it happened, while Joshua and the children of Israel made an end of slaying them with a very great slaughter, till they had finished, that those who escaped entered fortified cities.” Jos 10:20

With the end of this campaign, Joshua had defeated the major fortified cities of southern Canaan, with the exception of Jerusalem which was strongly situated in the mountains, and which remained as a Jebusite city state in the midst of Israel.

There were towns and villages in which still dwelt Canaanites and in which idolatry still flourished. But the strongest fortified cities with their kings were defeated, thus the political power of the Canaanites in the central and southern region was broken. But the work was by no means done. Thus the LORD’s word came to pass:

“And the LORD your God will drive out those nations before you little by little; you will be unable to destroy them at once, lest the beasts of the field become toonumerous for you. But the LORD your God will deliver them over to you, and will inflict defeat upon them until they are destroyed. And He will deliver their kings into your hand, and you will destroy their name from under heaven; no one shall be able to stand against you until you have destroyed them.” Deu 7:22-24