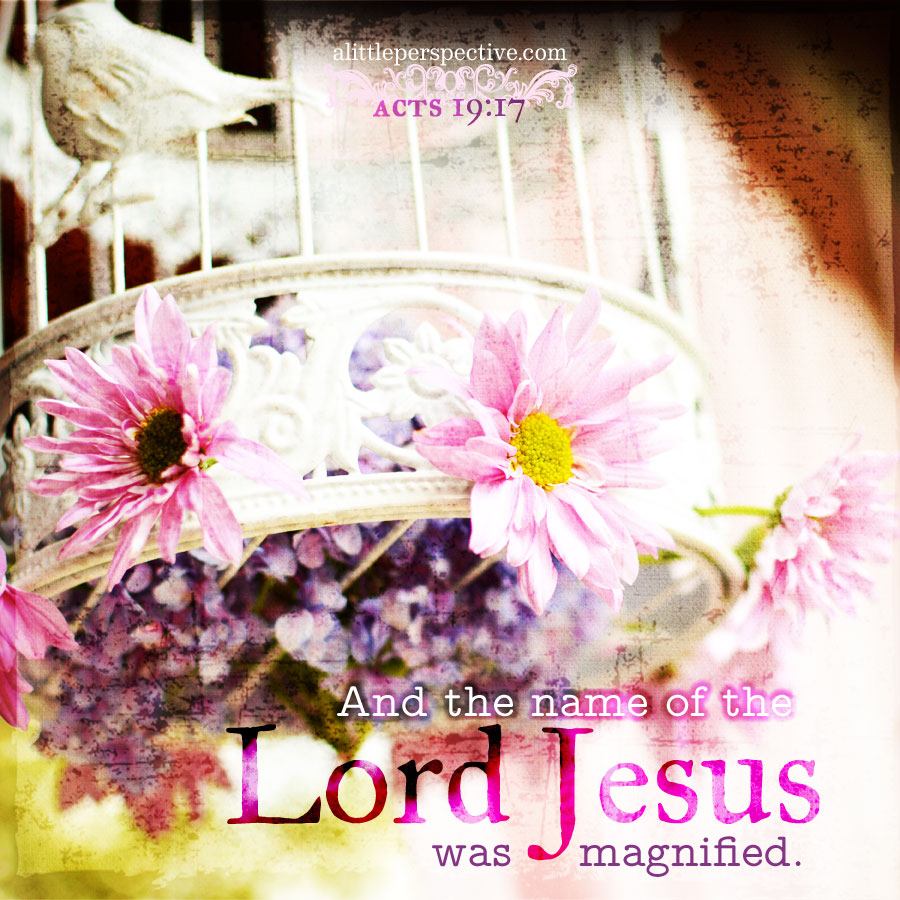 24 Now a certain Jew named Apollos, born at Alexandria, an eloquent man and mighty in the Scriptures, came to Ephesus. 25 This man had been instructed in the way of the Lord; and being fervent in spirit, he spoke and taught accurately the things of the Lord, though he knew only the baptism of John. 26 So he began to speak boldly in the synagogue. When Aquila and Priscilla heard him, they took him aside and explained to him the way of God more accurately;

1b) Act 18:27a, When he desired to cross to Achaia, the brethren wrote, exhorting the disciples to receive him;

central axis) Act 18:27b-28, “When he arrived, he greatly helped those who had believed through grace, for he vigorously refuted the Jews publicly, showing from the Scriptures that Jesus is the Christ;”

2a) Act 19:1b-8, The disciples who only knew John’s baptism/ Paul in the synagogue spoke boldly for three months;

1a) Act 19:1b, That Paul, having passed through the upper regions, came to Ephesus. And finding some disciples;
1b) Act 19:2, He said to them, “Did you receive the Holy Spirit when you believed?” / they had not heard of Him;
1c) Act 19:3, And he said to them, “Into what then were you baptized?” So they said, “Into John’s baptism;”
central axis) Act 19:4, Then Paul said, “John indeed baptized with a baptism of repentance, saying to the people that they should believe on Him who would come after him, that is, on Christ Jesus;”
2c) Act 19:5, When they heard this, they were baptized in the name of the Lord Jesus;
2b) Act 19:6, When Paul laid hands on them, the Holy Spirit came upon them + they spoke with tongues and prophesied;
2a) Act 19:7, Now the men were about twelve in all;

Act 19:8, And he went into the synagogue and spoke boldly for three months, reasoning and persuading concerning the things of the kingdom of God.

1a) Act 19:9, Those who spoke evil of the Way before the multitude;

1d) Act 19:11-16, The seven sons of Sceva sought to exorcise demons using the name of Jesus as a magic spell;

11 Now God worked unusual miracles by the hands of Paul, 12 so that even handkerchiefs or aprons were brought from his body to the sick, and the diseases left them and the evil spirits went out of them. 13 Then some of the itinerant Jewish exorcists took it upon themselves to call the name of the Lord Jesus over those who had evil spirits, saying, “We exorcise you by the Jesus whom Paul preaches.” 14 Also there were seven sons of Sceva, a Jewish chief priest, who did so. 15 And the evil spirit answered and said, “Jesus I know, and Paul I know; but who are you?” 16 Then the man in whom the evil spirit was leaped on them, overpowered them, and prevailed against them, so that they fled out of that house naked and wounded;

1e) Act 19:17a, This became known both to all Jews and Greeks dwelling in Ephesus; and fear fell on them all;

central axis) Act 19:17b, And the name of the Lord Jesus was magnified;

2e) Act 19:18, And many who had believed came confessing and telling their deeds;

2d) Act 19:19, Those who practiced magic burned their books, scorning their considerable value;

2a) Act 19:23, And about that time there arose a great commotion about the Way.

24 For a certain man named Demetrius, a silversmith, who made silver shrines of Diana, brought no small profit to the craftsmen. 25 He called them together with the workers of similar occupation, and said: “Men, you know that we have our prosperity by this trade;

26 Moreover you see and hear that not only at Ephesus, but throughout almost all Asia, this Paul has persuaded and turned away many people, saying that they are not gods which are made with hands. 27 So not only is this trade of ours in danger of falling into disrepute, but also the temple of the great goddess Diana may be despised and her magnificence destroyed, whom all Asia and the world worship.” 28 Now when they heard this, they were full of wrath and cried out, saying, “Great is Diana of the Ephesians!”

1c) Act 19:29a, So the whole city was filled with confusion, and rushed into the theater with one accord;

central axis) Act 19:29b-31, “Having seized Gaius and Aristarchus, Macedonians, Paul’s travel companions. 30 And when Paul wanted to go in to the people, the disciples would not allow him. 31 Then some of the officials of Asia, who were his friends, sent to him pleading that he would not venture into the theater;”

2c) Act 19:32, They cried one thing and another, for the assembly was confused/ most did not know why they had come together;

33 And they drew Alexander out of the multitude, the Jews putting him forward. And Alexander motioned with his hand, and wanted to make his defense to the people. 34 But when they found out that he was a Jew, all with one voice cried out for about two hours, “Great is Diana of the Ephesians!”

1a) Act 19:35a, And when the city clerk had quieted the crowd;
1b) Act 19:35b-37, You ought to be quiet + do nothing rashly/ these men are not robbers or blasphemers;
central axis) Act 19:38-39, “Therefore, if Demetrius and his fellow craftsmen have a case against anyone, the courts are open and there are proconsuls. Let them bring charges against one another. 39 But if you have any other inquiry to make, it shall be determined in the lawful assembly;”
2b) Act 19:40, There is no reason to account for today’s uproar + this disorderly gathering;
2a) Act 19:41, And when he had said these things, he dismissed the assembly.

In this chapter we see a glimpse of the spiritual warfare that occurs when the Word of the Lord Jesus Christ comes into a region that the enemy has previously held, with the power of the Holy Spirit bearing witness. The enemy holds a region, first of all, by blinding the eyes of the hearts and minds of the people who dwell there (2 Cor 4:4). Notice there was a synagogue of the Jews in Ephesus. However, that synagogue, and those who attended there, did not disturb the grip the enemy held on the people of that region. The synagogue coexisted with the paganism and each were at peace. That is not to say that the Jews compromised their faith. That is just to say that they each did their own thing and everyone was content.

So Paul found twelve disciples (twelve … interesting) and they received the baptism of the Spirit with tongues and other gifts.

Paul was instrumental, because he was not content to sit at home and coexist with the pagans around him. He first bore witness of the Lord Jesus Christ in the synagogue to the Jews for three months. Now many believed – only some were hardened, it says. But when those who were hardened began to speak evil of the Way of the Lord Jesus Christ, the believers departed the synagogue, and Paul began teaching in the School of Tyrannus daily. Since the rise of the Greek empire, in the major cities, any teacher or philosopher who gained a following could open a “school” where he taught his followers his philosophy. Schools dedicated to different philosophers were prevalent in the ancient world under the influence of Hellenistic culture. We don’t know who Tyrannus was or what he taught. Maybe he was long dead, but his building remained for teachers to rent as a venue to teach their followers.

But now that Paul was in the marketplace of ideas, so to speak, in the heart of Ephesus, both Jews and Gentiles – any of the Ephesians – could come and hear him teach. During the course of the two years that he was there, many notable miracles were done through Paul, which magnified the Lord Jesus Christ. The Holy Spirit empowers us to witness to the Lord Jesus Christ, and the working of miracles gave Paul a platform – a pattern we have seen over and over in Acts. People came out of curiosity to hear this man who could heal people just from a handkerchief from his body. So people began to be set free from the works of the enemy – sorcery, diseases, demonic possession. Now it was the Word of the Lord that grew mightily and prevailed – over the hearts and minds of the people that the enemy formerly held in bondage!

To retaliate, the enemy incited a mob. He did not have teeth against the believers of the Lord Jesus Christ. (He did have teeth against religious people who did not have the Lord, however; vs. 13-16.) All he could do was make a big noise and spread confusion. And we see a riot ensues, because the idol makers were on the verge of bankruptcy. What a glorious testimony! The Lord wants to disrupt the lives of His believers and the lives of those who are bound by the enemy, and He wants to disrupt our towns! He wants to come into an area, held by the enemy, and He does not want to coexist there! He wants to close down the silversmiths, so to speak – anything that exalts itself over YHVH the Creator of Heaven and Earth! He wants His Word to grow mightily and prevail!

I think we get comfortable in our safe “synagogues,” but in order to change our towns, we need to get out there into the heart of the city, into the marketplace of ideas, and advance on the enemy’s territory. If we are magnifying Him, then the Lord will give us a platform!