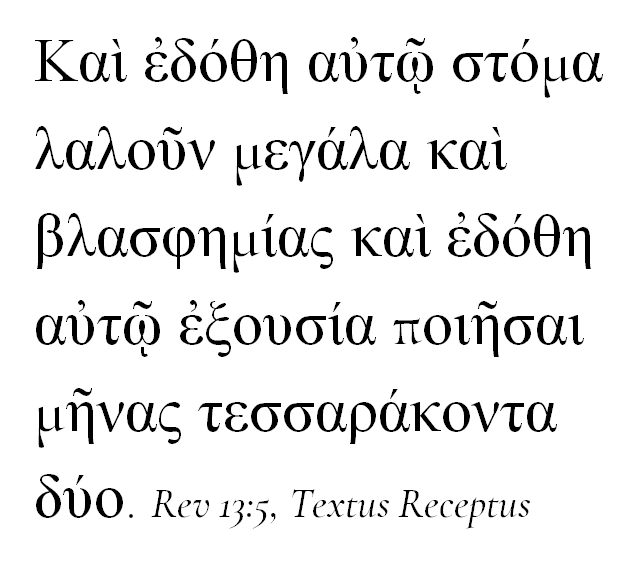 This is speaking of the beast from the land, the one with seven heads and ten horns; so a combination beast of Babylon, Persia, Greece, and Rome. We know this to be true, because in verse 3, it says one of its heads, which received a mortal wound, was healed. That is the head of Rome, of course the mortal wound is the Fall of Rome in 476, and the healing is the establishment of the Holy Roman Empire in 800.

But I was trying to sort out the forty-two months, because the Holy Roman Empire did not last that long, taking each day of prophetic time as a year of historic time. Notice the little [c]? It indicates a translation note:

When I looked up the Greek in the Blue Letter Bible, and examined each word, I found that the word ‘war’ is not there.

I went back to the introduction of my NKJV Bible, to find out what ‘M-Text’ is that says, ‘make war.’

A third viewpoint of New Testament scholarship holds that the best text is based on the consensus of the majority of the existing Greek manuscripts. This text is called the Majority Text. Most of these manuscripts are in substantial agreement. Even though many are late, and none is earlier than the fifth century, usually their readings are verified by papyri, ancient versions, quotations from the early church fathers, or a combination of these. The Majority is similar to the Textus Receptus, but it corrects those readings which have little or no support in the Greek manuscript tradition.

I thought, “Well, which version is right?” Making war for forty-two months makes sense, because the beast has existed for far longer than forty-two months. But there is a definite beginning and ending to the war. I thought the chiastic structure would help decide: 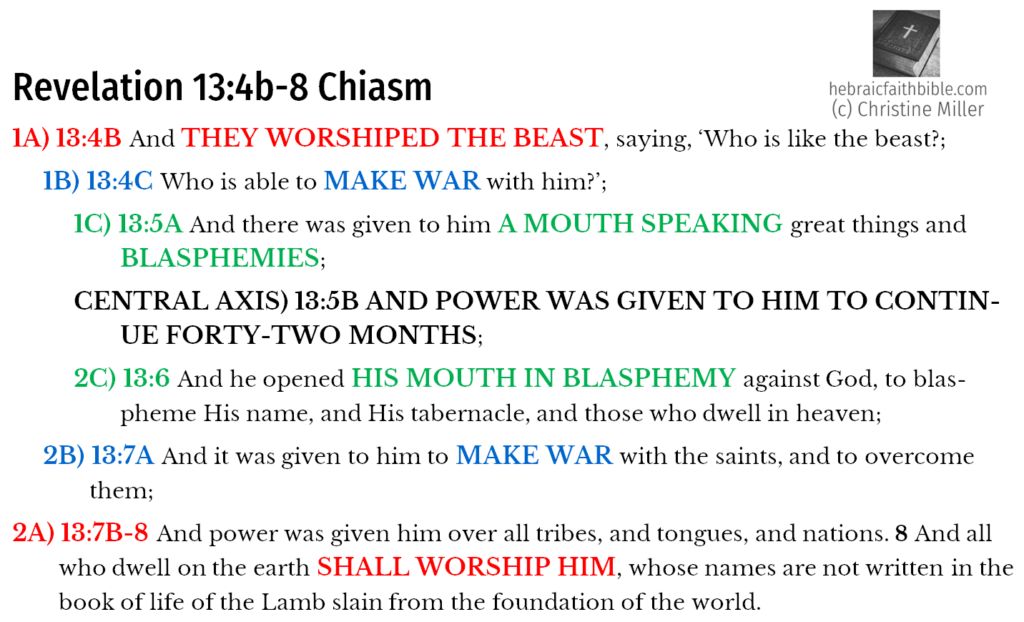 If the structure reads, “And power was given to him to make war forty-two months,” rather than “to continue,” it makes sense, because we can see that the surrounding elements are about this war, with the central axis revealing how long the war lasts.

Septuagint: YHVH will fight for you, and you shall hold your peace. Exo 14:14
Strong’s H3898, lacham, לחם, a primitive root meaning, “to fight, do battle, make war.”

Strong’s H3898 לחם lacham, a primitive root meaning, “to eat,” but only used poetically according to Gesenius; thus, “to devour, to fight, to wage war.” The 3-letter root is lamed + chet + mem.

And it was given to him to make war with the saints, and to overcome them; and power was given him over all tribes, and tongues, and nations. Rev 13:7

Christine’s book The Revelation of Jesus Christ Revealed, based on these studies but greatly expanded, is available at Revelation Revealed Online. You may also be interested in reading the Book Extras and joining in on the Discussion.