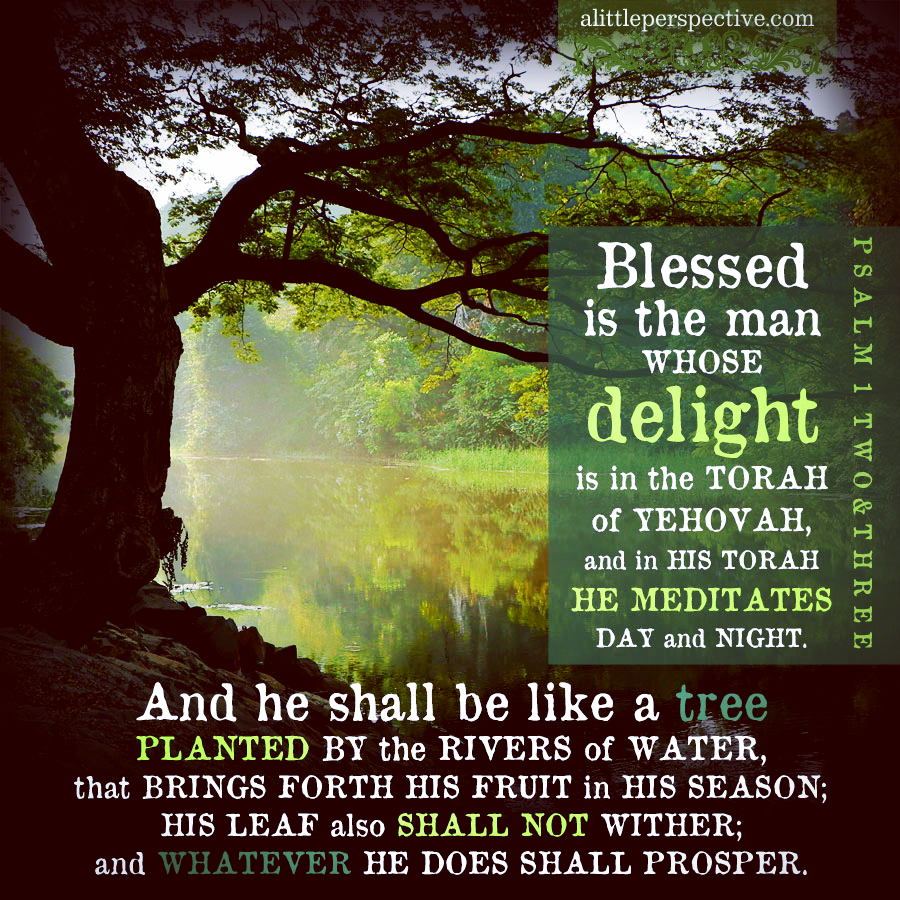 The Psalms contain paragraph divisions similarly as the Torah does:

“We have added signs for the paragraphs found in the original Hebrew:  In the poetical books of Psalms, Job (aside from the beginning and end), and Proverbs, each verse normally starts on a new line; where there is a new line within a verse, we added {N}, and when there is a blank line, we added {P}.” Hebrew Bible in English

Psa 1:1a, Happy is the man that hath not walked in the counsel of the wicked; {n}
Psa 1:1b, Nor stood in the way of sinners, nor sat in the seat of the scornful;
Psa 1:2, But his delight is in the torah of Yehovah; and in His torah doth he meditate day and night;
Psa 1:3a, And he shall be like a tree planted by streams of water; {n}
Psa 1:3b, That brings forth its fruit in its season, whose leaf does not wither; in whatever he does he shall prosper;
Psa 1:4, Not so the wicked; but they are like the chaff which the wind drives away;
Psa 1:5, Therefore the wicked shall not stand in the judgment, nor sinners in the congregation of the righteous;
Psa 1:6, For Yehovah regards the way of the righteous; but the way of the wicked shall perish. {p}

1a) Psa 1:1-2, The contrast between the righteous and wicked;

1b) Psa 1:3a The righteous are like a tree planted by the rivers of water {n};

central axis) Psa 1:3c, Whose leaf also does not wither;

2b) Psa 1:4, The wicked are like the chaff which the wind drives away;

2a) Psa 1:5-6, The contrast between the righteous and wicked;

Psalm 1 is reiterating what we have already seen in Torah, that Torah obedience brings about blessing in this life for the natural man. The central axis and its surrounding elements describe the prosperity of the righteous.

In the Psalms, there is not a distinction between the righteous who are in right- standing before God by grace through faith (the justified or saved) and the righteous who are deemed so because of their righteous deeds (the sanctified). In the New Testament, one kind of righteousness (justification) is a result of faith, and the other kind of righteousness (sanctification) is a result of works. Paul made this distinction in the New Testament in order to explain salvation to Gentiles. However, throughout the Hebrew Bible, the two are simply regarded as the single “righteousness.” God accounts righteousness to the circumcised heart before Him, the heart which believes in God and believes the truth of God’s words. This is the righteousness that is of faith: salvation or justification. This righteousness, however, always produces the corresponding righteous deeds lived out in the life: sanctification. Faith and works are not really enemies or opposites. ♥