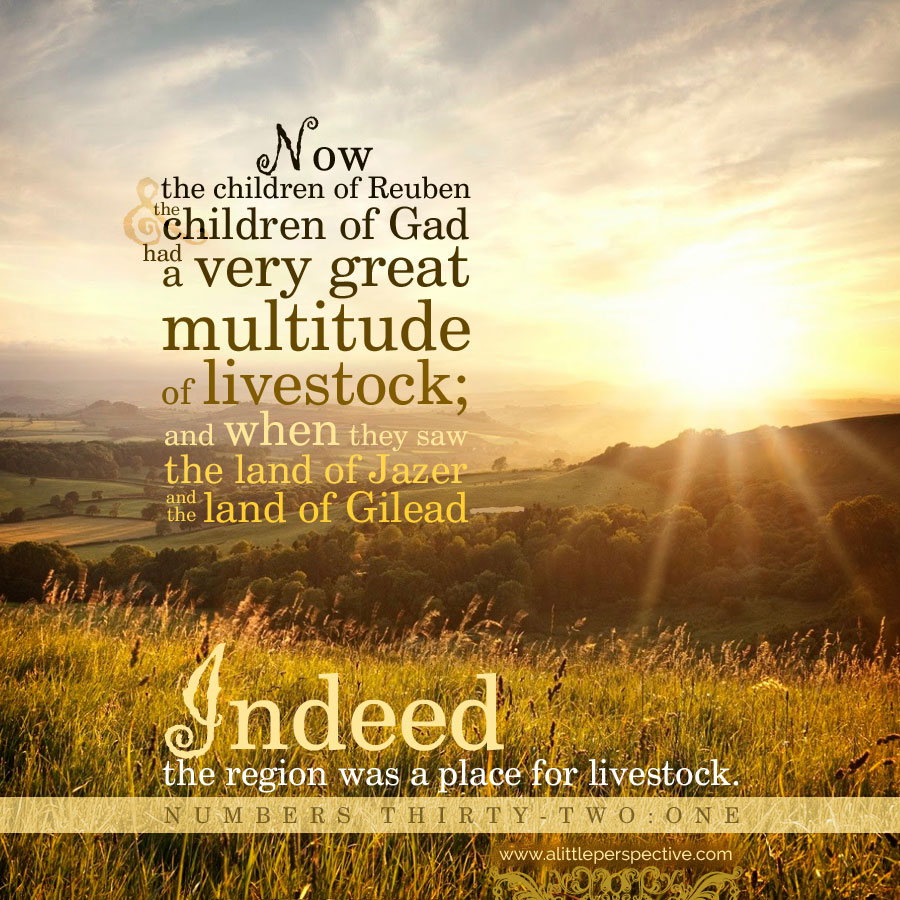 Read Numbers 31 and 32 at Bible Gateway.

And the strong themes:

The chiastic structure reveals something about the purpose of the war with Midian:

1b) Num 31:1-8, One thousand from each tribe prevailed over Midian;

1e) Num 31:14-15, Moses was angry with the officers and captains: Why were the women of Midian kept alive?;

central axis) Num 31:16, These were the women who enticed Israel re: Baal of Peor, by the counsel of Balaam;

2e) Num 31:17-18, Kill the women and male children, keep the female children who are virgins for yourselves;

The repeated theme in these chapters is that there is a warfare that is the LORD’s warfare. Moses was commanded by the LORD to take vengeance on the Midianites (Num 31:2). Moses even told the children of Israel, that they were to take vengeance for the LORD on Midian (Num 31:3).

“And they warred against the Midianites, just as the LORD commanded Moses, and they killed all the males.” Num 31:7

The country which was east of the Jordan, the kingdoms of the Amorites, was the country which the LORD defeated before the congregation of Israel (Num 32:4). Because Caleb and Joshua were willing to enter the land armed for war 38 years previously, and encouraged the children of Israel to enter the land armed for war, Moses said of them that they had wholly followed the LORD (Num 32:12). When Moses thought that Reuben and Gad wanted to opt out of the warfare needed to possess the land, he warned them that they would be turning away from following the LORD (Num 32:15).

Then Moses said to them, “If you do this thing, if you arm yourselves before the LORD for the war, and all your armed men cross over the Jordan before the LORD until He has driven out His enemies from before Him, and the land is subdued before the LORD, then afterward you may return and be blameless before the LORD … But if you do not do so, then take note, you have sinned against the LORD; and be sure your sin will find you out.” Num 32:20-23

In fact it would be sin for Reuben and Gad to not cross over armed with Israel, to drive out, not Israel’s enemies, but the LORD’s enemies from before Him!

Now the LORD has reconciled the world to Himself, in the blood of Messiah Yeshua our Lord, but enemies to the LORD remain, who are not flesh and blood, but principalities, powers, rulers of the darkness of this age, and spiritual hosts of wickedness in the heavenly places (Eph 6:10-18). God has given us armor and weapons, which are sharper than any two edged sword, and has already defeated His enemies before Him! But we must gird up, and cross over, and do battle, and not shrink back from following Him!