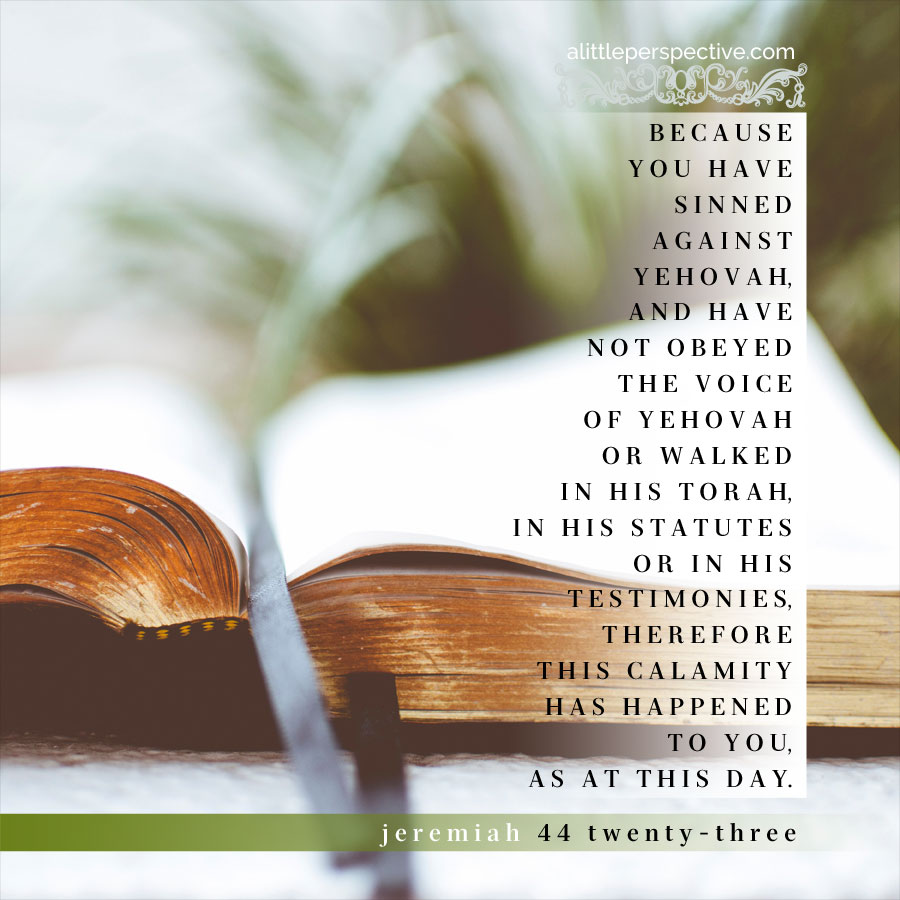 Read Jeremiah 43 and 44 at Bible Gateway.

Jer 43:1 {s} When Jeremiah had told all the word of YHVH to the remnant, to whom YHVH had sent him
Jer 43:2-7 {s} The captains + proud men rebuked him/ took everyone left to Egypt, did not obey YHVH
Jer 43:8-13 {p} YHVH to Jeremiah in Egypt: The king of Babylon shall set his throne here + burn Egypt’s gods
Jer 44:1-6 {s} YHVH to the remant in Egypt: My wrath was against Judah because of unrepented idolatry
Jer 44:7-10 {s} Why do you burn incense to the gods of Egypt? Why are you not humbled before Me?
Jer 44:11-14 {p} The remnant of Judah in Egypt shall be consumed by sword, famine, pestilence
Jer 44:15-19 {s} The remnant refused to listen to Jeremiah but insisted to continue in worship of the queen of heaven
Jer 44:20-23 {s} Jeremiah: Is it not because of your wickedness that Judah is a desolation to this day?
Jer 44:24-25 {s} Thus says YHVH to the remnant in Egypt who have vowed worship to the queen of heaven
Jer 44:26-29 {p} I have vowed by My great name: you will perish, but a small remnant shall escape/ this is the sign
Jer 44:30 {s} Pharaoh Hophra will be given to his enemies as Zedekiah was given to the king of Babylon

We saw yesterday, that when the remnant of Judah desired to flee to Egypt, because of fear of reprisal from the king of Babylon, they inquired of the LORD through Jeremiah what they should do. The LORD told them that they were hypocrites, in inquiring of Him (Jer 42:20), because they had already determined in their hearts what they would do, whether He said yea or nay.

And when Jeremiah told them what they did not want to hear — stay here and do not be afraid of the king of Babylon, for I am with you –:

“Now it happened, when Jeremiah had stopped speaking to all the people all the words of the LORD their God, for which the LORD their God had sent him to them, all these words, that Azariah the son of Hoshaiah, Johanan the son of Kareah, and all the proud men spoke, saying to Jeremiah, “You speak falsely! The LORD our God has not sent you to say, ‘Do not go to Egypt to dwell there.'” Jer 43:1-2

When our hearts have set themselves on a desire, we must beware, because we can find religious and right- sounding excuses to ignore and discredit what the LORD is saying, that goes against our desires, that we have already set our hearts upon, and convinced ourselves that the LORD is already in agreement with.

The remnant fled to Egypt anyway. Jeremiah and his scribe Baruch were taken to Egypt with the remnant against their will. An extrabiblical rabbinical tradition has it that Jeremiah died in Egypt, stoned to death by his countrymen, who became exasperated with his prophecies and calls for repentance. I am sure a charge of false prophet was leveled against him, and he was put to death, supposedly in accordance with the command of Torah.

Nebuchadnezzar soon came against Egypt, overcame it, and added it as a province to his empire. All that the LORD had declared would come upon the remnant of Judah in Egypt, came upon them: the sword of the Babylonians, and those who were left were taken captive to Babylon, along with captive Egyptians. In Babylon they joined the Jewish captives who had already been taken captive, in three separate campaigns.

The moral of the story: we must pay attention to the desires of our hearts, as they can be life or death to us!

Keep your heart with all diligence, for out of it spring the issues of life. Pro 4:23