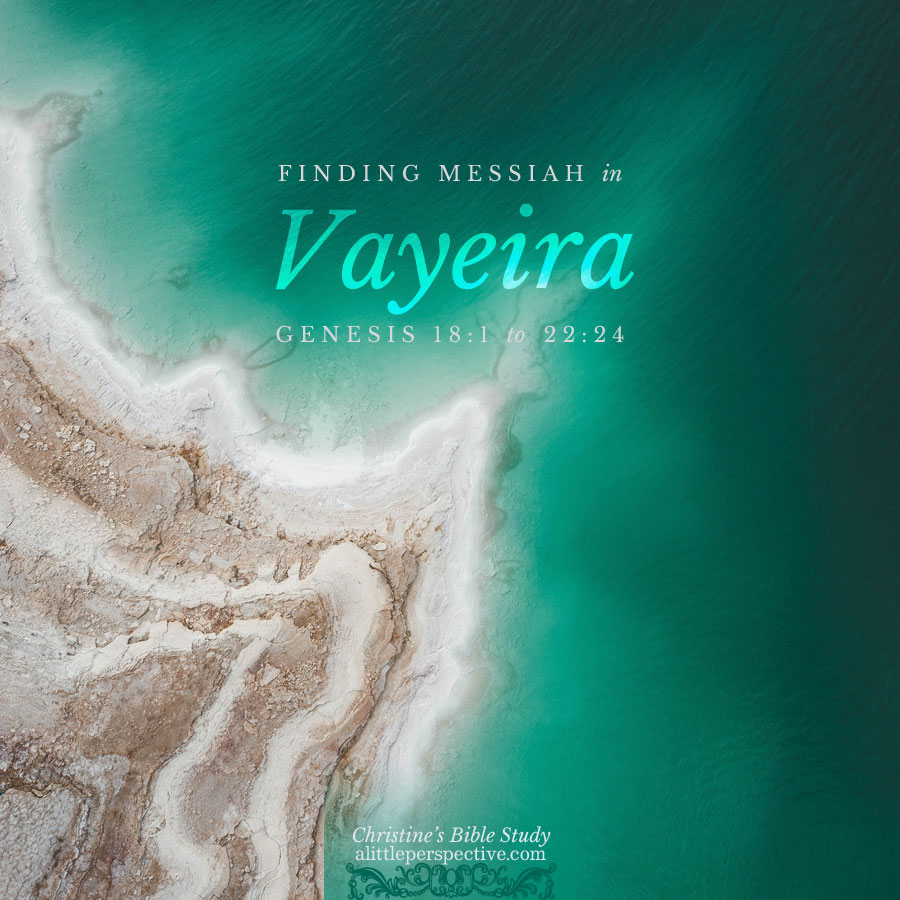 If we read ahead to chapter 19, we see that two of the men went to Sodom, while YHVH remained behind and talked with Abraham. Clearly YHVH appeared to Abraham in the form of a man, but as it is true of the Father that “No man has seen God at any time,” this must be a preincarnate theophany of Yeshua, “the only begotten Son, who .. has declared Him,” (Joh 1:18).

“For had you believed Moses, you would have believed Me, for he wrote of Me.” Yeshua, Joh 5:46

“And as it was in the days of Noah, so shall it be also in the days of the Son of Man. They ate, they drank, they married wives, they were given in marriage, until the day that Noah entered into the ark, and the flood came, and destroyed them all. Likewise also as it was in the days of Lot; they ate, they drank, they bought, they sold, they planted, they built; but the same day that Lot went out of Sodom it rained fire and brimstone from heaven, and destroyed them all. Even thus shall it be in the day when the Son of man is revealed. In that day, he which shall be upon the housetop, and his stuff in the house, let him not come down to take it away, and he that is in the field, let him likewise not return back. Remember Lot’s wife.” Yeshua, Luk 17:26-32

This history prophesies, repeated in the call for God’s people to “Come out of her.”

And I heard another voice from heaven, saying, “Come out of her, My people, that you not be partakers of her sins, and that you receive not of her plagues. For her sins have reached unto heaven, and God has remembered her iniquities.” Rev 18:4-5

Come out of Mystery Babylon, people of the Most High, as Lot came out of Sodom.

“Now therefore restore to the man his wife; for he is a prophet, and he shall pray for you, and you shall live. And if you restore her not, know that you shall surely die, you, and all that are yours.” Gen 20:7

Abraham’s ministry of mediation is the ministry of Messiah, Messiah being the Promised Seed who was born through Abraham.

For there is one God, and one Mediator between God and men, the man Messiah Yeshua. 1 Tim 2:5

Isaac by prophetic type as the seed of promise proclaims Yeshua, the Seed of Promise.

Just as Abraham and Abimelech walked in a covenant of peace, when the Promised Seed, Abraham’s heir, came, there will be neither Jew nor Greek, male or female, but in Him we will walk in peace with each other.

The binding of Isaac is full of signs of Messiah.

And He said, “Take now your son, your only son Isaac, whom you love, and get into the land of Moriah; and offer him there for a burnt offering upon one of the mountains of which I will tell you.” Gen 22:2

And He said, “Lay not your hand upon the lad, neither do any thing unto him: for now I know that you fear God, seeing that you have not withheld your son, your only son from Me.” Gen 22:12

God was not being inaccurate, but prophesying of Messiah as His only Son, with Isaac as the prophetic type.

3) The place of sacrifice and resurrection by type was a journey of three days.

Then on the third day Abraham lifted up his eyes, and saw the place afar off. Gen 22:4

4) Abraham fully expected Isaac to be raised from the dead after the sacrifice, as he told the young men they would both return.

And Abraham said unto his young men, “Abide here with the donkey; and I and the lad will go yonder and worship, and come again to you.” Gen 22:5

And in a manner of speaking, Isaac was raised from the dead—his death was certain, but he received his life through miraculous intervention (vs. 12). This is the Messianic sign of resurrection and life in Torah.

5) The wood for the sacrifice was laid upon Isaac to bear to the place of sacrifice.

And Abraham took the wood of the burnt offering, and laid it upon Isaac his son; and he took the fire in his hand, and a knife; and they went both of them together. Gen 22:6

6) God Himself will provide the Lamb for the sacrifice.

And Abraham said, “My son, God will provide Himself a lamb for a burnt offering,” so they went both of them together. Gen 22:8

7) Isaac, as a young man of twenty-five years, could have resisted Abraham, as an old man of 125 years, if he so chose, when his father bound him to the altar. But he submitted himself willingly to the will of his father.

And they came to the place of which God had told him; and Abraham built an altar there, and laid the wood in order, and bound Isaac his son, and laid him on the altar upon the wood. Gen 22:9

GENESIS 18:1-22:24 ANNUAL VAYEIRA “AND HE APPEARED” OUTLINE | GENESIS in CHIASTIC STRUCTURE
FINDING MESSIAH in TORAH: A MESSIANIC DISCOVERY THROUGH the TORAH PORTIONS
THE LAW of LOVE: THE GOSPEL of GRACE REVEALED in the COMMANDMENTS OF GOD