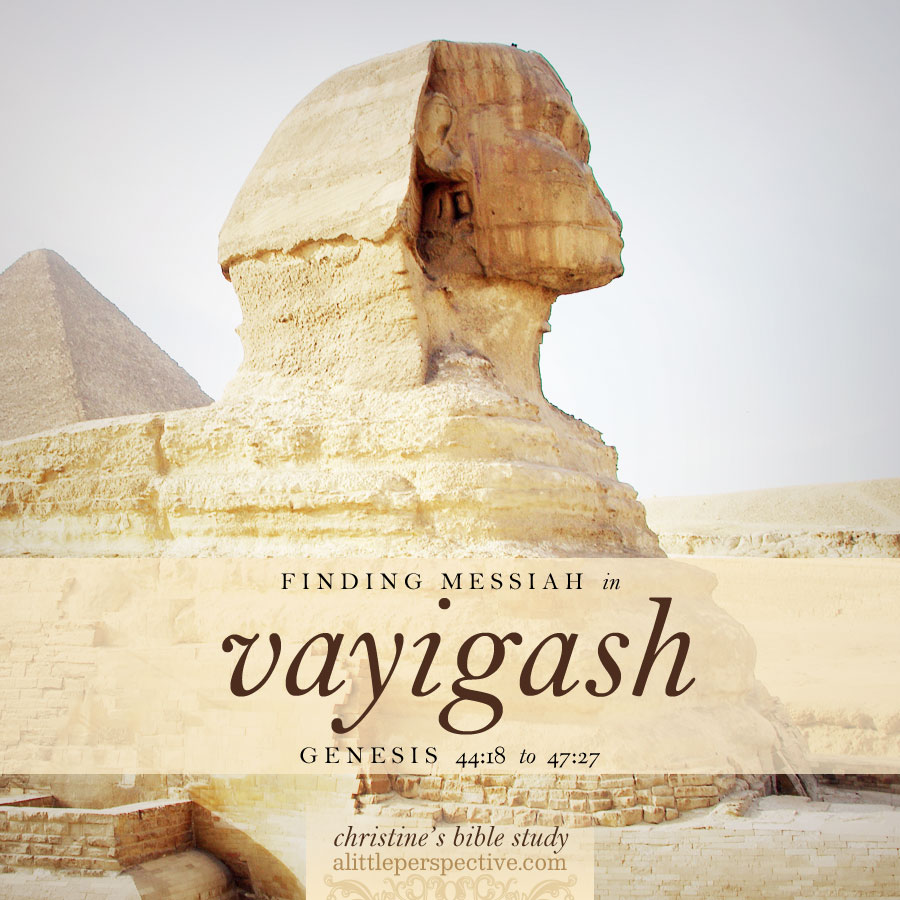 “For your servant became surety for the lad unto my father, saying, ‘If I bring him not unto you, then I shall bear the blame to my father for ever.’ Now therefore, I pray you, let your servant remain, instead of the lad, a bondman to my lord; and let the lad go up with his brethren. For how shall I go up to my father, and the lad is not with me, lest perhaps I see the evil that shall come on my father?” Gen 44:32-34

Judah, in his speech to Joseph, offers himself to be slave in his brother Benjamin’s place. Slavery is a type of death, as it ends the way of life previously known. Judah had no way of knowing that the whole incident had been staged. He truly believed he was going to spend the rest of his life as a slave in Egypt. He could have let Benjamin bear his punishment, but out of love for his father, he gave himself in his brother’s place. His substitutionary “death” prophesies of Messiah Yeshua.

If we outline the weak paragraph of Gen 44:18-46:7 which began with Judah’s speech, we find three distinct events where we would have ended the paragraph if we were in charge of making paragraph divisions; thankfully God is smarter than we are!

In Gen 44:18-34, Judah prophesied of Messiah’s first coming, where He offered Himself in our place, and died a substitutionary death on the cross out of love for His Father.

In Gen 45:1-15, Joseph revealed himself to his brothers. They do not recognize him until he makes himself known. They were separated by many years and Joseph was dressed like an Egyptian nobleman, after all. Isn’t this what Yeshua has been doing for the past 2000 years, revealing Himself to all who would come to Him? We do not find Him, but He finds us and makes Himself known to us.

In Gen 45:16-46:7, we see the Messianic prophecy that when Yeshua comes in His second coming, it will be as King and not as a servant. Jacob will live under His reign, and life will be good with nothing to hurt in all the place of His authority.

This section of Genesis falls in the middle of a strong theme of Scripture, that is, multiple weak paragraphs {s}, all facets of a single topic, joined end to end and concluded by a strong paragraph {p}, which finishes that topic before going on to a new topic.

Gen 41:1-47:31 {sx3+p} Strong theme: Joseph raised up to overseer in order to serve as provider for his father and brothers.

1C) 45:9-13 Joseph proposes that JACOB AND HIS HOUSEHOLD COME TO EGYPT;

1E) 46:1 So ISRAEL TOOK HIS JOURNEY with all that he had AND CAME TO BEERSHEBA, and offered sacrifices to the God of his father Isaac;

Joseph said to his brothers at one point in this narrative,

“Now therefore do not be grieved, nor angry with yourselves, that you sold me here, for God sent me before you to preserve life.” Gen 45:5

And God spoke unto Israel in the visions of the night, and said, “Jacob, Jacob.” And he said, “Here am I.” And he said, “I am God, the God of your father. Do not fear to go down into Egypt; for I will there make of you a great nation; I will go down with you into Egypt; and I will also surely bring you up again, and Joseph shall close your eyes.” Gen 46:2-4

When we consider that Joseph is prophetic of Messiah—that Messiah was cast down in the will of God, to be brought up in the will of God, in order to preserve life—our life, we can see that this central axis promise applies to us as well who have placed our trust in Yeshua.

Egypt is a type of the kingdom of darkness. It is a type of the exile we are in, dwelling in the kingdoms of this world which is not our home. God has surely been with His people—that is you and me! —while they have dwelt in Egypt. God has surely made His people into a great nation—the people of the kingdom of heaven—while they—we—have been exiled in Egypt. And God will also surely bring His people—that is you and me!—up again, and bring us to the kingdom He has promised us for our inheritance and our dwelling place.

Joseph as overseer and provider is prophesying of Messiah in His second coming. When He returns to reign as King of kings and Lord of lords, and He has revealed Himself to His brothers, they come into His kingdom to dwell. He provides for them, and they are blessed under His authority and care.

And he sent Judah before him unto Joseph, to direct his face unto Goshen; and they came into the land of Goshen. Gen 46:28

Now after the death of Joshua it came to pass, that the children of Israel asked YHVH, saying, “Who shall go up for us against the Canaanites first, to fight against them?” And YHVH said, “Judah shall go up; behold, I have delivered the land into his hand.” Jud 1:1-2

For I would not, brethren, that you should be ignorant of this mystery, lest you should be wise in your own conceits: that blindness in part has happened to Israel, until the fulness of the Gentiles are come in. And so all Israel shall be saved … Rom 11:25-26a

Judah has gone up first, and will be last to enter the kingdom, after all Ephraim/ Gentiles/ Christians have come from the east, west, north, and south to sit down in the kingdom of God. And they also, when Messiah reveals Himself to His brothers, will enter in.

GENESIS 44:18-47:27 ANNUAL VAYIGASH “AND HE DREW NEAR” OUTLINE | GENESIS in CHIASTIC STRUCTURE
FINDING MESSIAH in TORAH: A MESSIANIC DISCOVERY THROUGH the TORAH PORTIONS
THE LAW of LOVE: THE GOSPEL of GRACE REVEALED in the COMMANDMENTS OF GOD