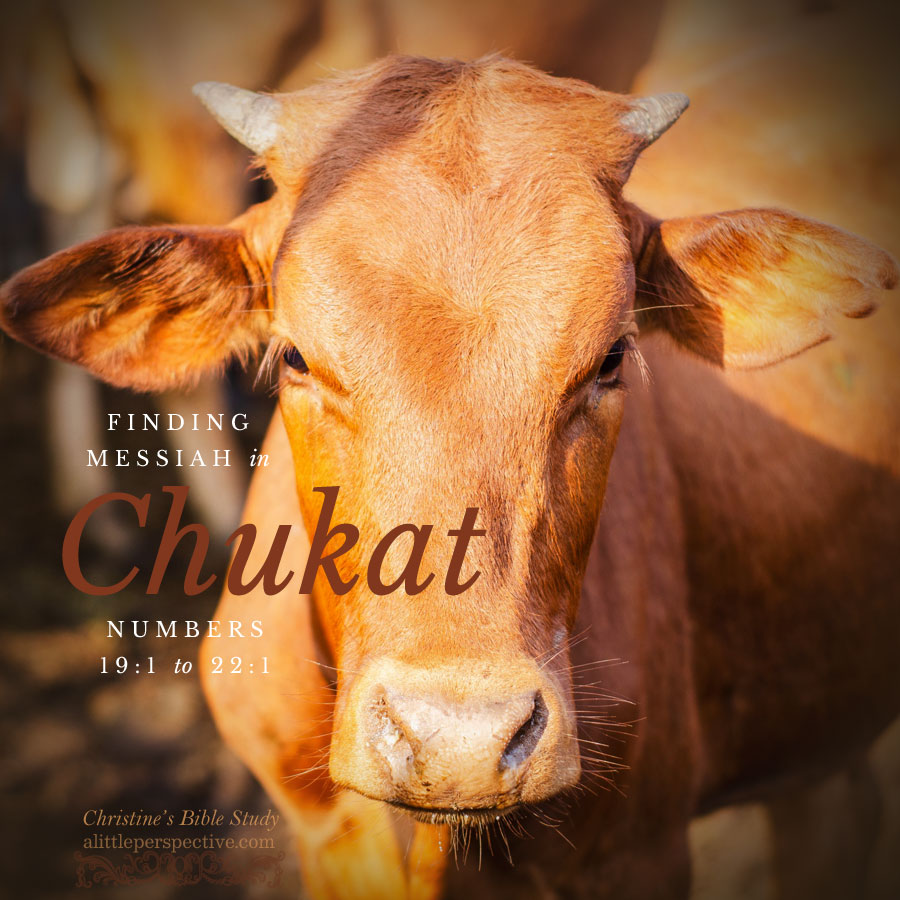 The law of the red heifer for purification is a prophetic picture of Messiah:

… a red heifer without spot, in which is no blemish, and upon which never came a yoke. Num 19:2

Messiah is without spot, that is, faultless, and without blemish.

You know that you were not redeemed with corruptible things, as silver and gold, from your vain way of life received by tradition from your fathers; but with the precious blood of Messiah, as of a lamb without blemish and without spot: 1 Pet 1:18-19.

The red heifer sacrifice was the only sacrifice which took place outside the camp, or away from the altar and tabernacle. Yeshua was likewise crucified outside the city of Jerusalem.

And they took Yeshua, and led Him away. And He, bearing His cross, went forth into a place called the place of a skull, which is called in the Hebrew Golgotha; where they crucified Him, and two other with Him, on either side one, and Yeshua in their midst. Joh 19:16-18

Let us go forth therefore unto Him outside the camp, bearing his reproach. Heb 13:13

The red heifer sacrifice was the only sacrifice where the ashes from the burning were saved to be used in the future. The ashes were to be mixed with water to make the “water of separation” by which the unclean were made clean. Since the blood was burned with the sacrifice, you might say the ashes plus water made clean by a mixture of blood and water. Likewise, water and blood flowed from Yeshua in His death, which John takes pains to emphasize.

But one of the soldiers with a spear pierced His side, from whence came forth blood and water. And he that saw it bore witness, and his witness is true, knowing that he speaks truth, that you might believe. Joh 19:34-35

The red heifer sacrifice was the only sacrifice which made the priest himself unclean, while making the unclean clean. Likewise, Yeshua was made to be sin who knew no sin, that we might be made the righteousness of God in Him.

For He has made Him to be sin for us, who knew no sin; that we might be made the righteousness of God in Him. 2 Cor 5:21

And the priest shall take cedar wood, and hyssop, and scarlet, and cast it into the midst of the burning of the heifer. Num 19:6

Wood, hyssop, and scarlet together is a sign of Messiah in Torah.

Then Moses called for all the elders of Israel and said to them, “Pick out and take lambs for yourselves according to your families, and kill the Passover lamb. And you shall take a bunch of hyssop, dip it in the blood [scarlet] that is in the basin, and strike the lintel and the two doorposts [wood] with the blood that is in the basin. And none of you shall go out of the door of his house until morning. For the Lord will pass through to strike the Egyptians; and when He sees the blood on the lintel and on the two doorposts, the Lord will pass over the door and not allow the destroyer to come into your houses to strike you.” Exo 12:21-23

As for the living bird, he shall take it, the cedar wood and the scarlet and the hyssop, and dip them and the living bird in the blood of the bird that was killed over the running water. And he shall sprinkle it seven times on him who is to be cleansed from the leprosy, and shall pronounce him clean, and shall let the living bird loose in the open field. Num 14:6-7

There are only three places in Torah that I could find, where the wood, scarlet, and hyssop appear together. Three, a sign of Messiah in Torah. In each of these three instances (Exo 12, Lev 14, and Num 19) Israel was being delivered from death.

The ashes of the red heifer were kept to purify someone who had touched death (Num 19:11-18). The blood of the Passover lamb does not allow the angel of death to enter (Exo 12:23). Leprosy is a fatal disease, but which does not kill in one day. The ceremony of the living bird cleanses the former leper from his walking death (Lev 14:7).

Hyssop appears in a few more places in Scripture connected with purification.

For when Moses had spoken every precept to all the people according to the law, he took the blood of calves and goats, with water, scarlet wool, and hyssop, and sprinkled both the book itself and all the people, saying, “This is the blood of the covenant which God has commanded you.” Then likewise he sprinkled with blood both the tabernacle and all the vessels of the ministry. And according to the law almost all things are purified with blood, and without shedding of blood there is no remission. Heb 9:19-22

Messiah is the perfect purification from sin and death.

… the ashes of the heifer … shall be kept for the congregation of the children of Israel for a water of sprinkling; it is a purification from sin. Num 19:9

For if the blood of bulls and goats and the ashes of a heifer, sprinkling the unclean, sanctifies for the purifying of the flesh, how much more shall the blood of Christ, who through the eternal Spirit offered Himself without spot to God, cleanse your conscience from dead works to serve the living God? Heb 9:13-14

This section of Scripture concludes with a single weak paragraph, introducing a new strong theme.

Messiah Yeshua is our High Priest, and through His death on the cross, He subdued our enemies—sin, death, and the power of the devil—under our feet.

And you, being dead in your sins and the uncircumcision of your flesh, He has made alive together with Him, having forgiven you all trespasses; blotting out the certificate of debt that was against us, which was contrary to us, and took it out of the way, nailing it to His cross; and having disarmed principalities and powers, He made a open spectacle of them, triumphing over them in it [the cross]. Col 2:13-15

The next strong theme of Scripture, following the above is:

This is a complete picture of the Gospel of grace. The complaints reveal the heart of the old man, the old nature, here foreshadowed by the old generation of unbelief (Heb 3:17-19). But then, when eyes are opened to that unbelief, and it is confessed as sin and repented of, the old man looks to Messiah Yeshua on the cross, and his nature is fundamentally changed. He becomes the new man with a new nature, here foreshadowed by the new generation of belief. The praise serves to reveal the heart of the new man.

The bronze serpent on the pole is a prophetic picture of Messiah Yeshua on the cross. We don’t have to speculate about this as Yeshua Himself taught this to us.

“And as Moses lifted up the serpent in the wilderness, even so must the Son of Man be lifted up, that whoever believes in Him should not perish but have eternal life.” Joh 3:14-15

We are used to thinking of the serpent as associated with the devil, the enemy. In fact, the serpent was on the pole, because when Yeshua was on the cross, the sins of the whole world were laid upon Him—the fruit of the serpent. Sin was crucified with Yeshua, and when He was raised to life again, sin stayed dead in the grave. Hallelujah!

NUMBERS 19:1-22:1 ANNUAL CHUKAT “DECREE” OUTLINE | NUMBERS in CHIASTIC STRUCTURE
FINDING MESSIAH in TORAH: A MESSIANIC DISCOVERY THROUGH the TORAH PORTIONS
THE LAW of LOVE: THE GOSPEL of GRACE REVEALED in the COMMANDMENTS OF GOD