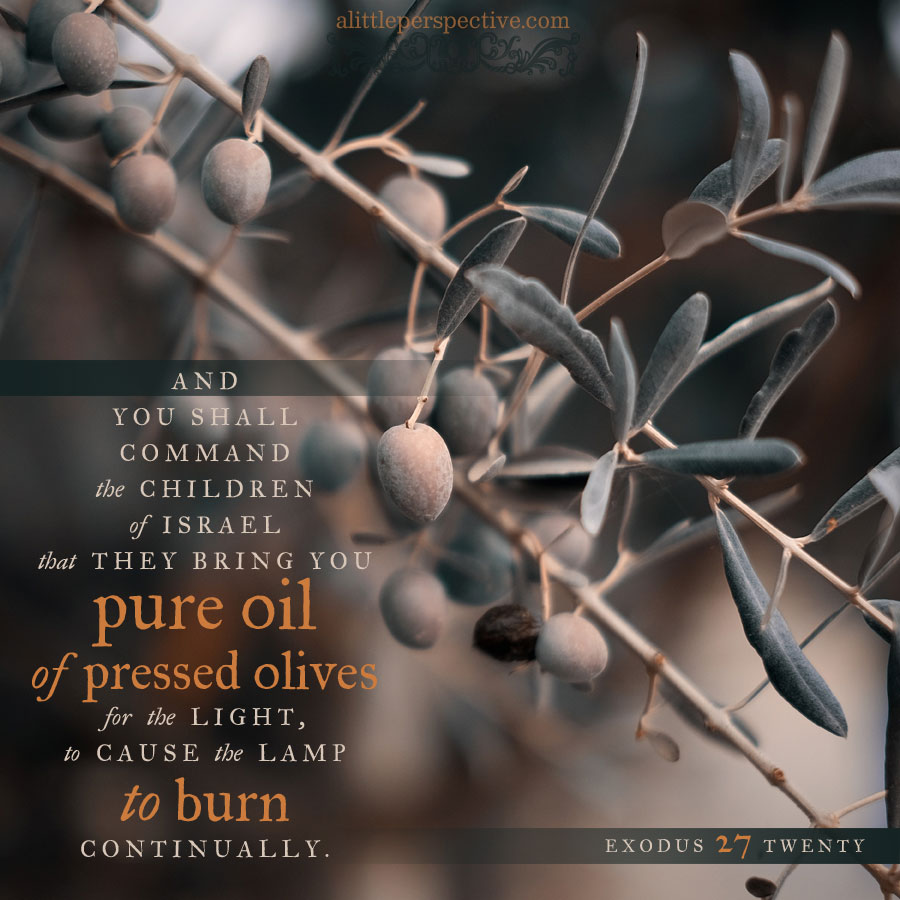 The tabernacle which God is instructing Moses to build in the wilderness, is a copy of the heavenly Temple wherein he had seen God, along with Aaron and the elders of Israel (Exo 24:9-11). This is why the LORD repeatedly instructed Moses to make all things according to the pattern which he had seen on the mountain:

Now this is the main point of the things we are saying: We have such a High Priest, who is seated at the right hand of the throne of the Majesty in the heavens, a Minister of the sanctuary and of the true tabernacle which the Lord erected, and not man. For every high priest is appointed to offer both gifts and sacrifices. Therefore it is necessary that this One also have something to offer. For if He were on earth, He would not be a priest, since there are priests who offer the gifts according to the law; who serve the copy and shadow of the heavenly things, as Moses was divinely instructed when he was about to make the tabernacle. For He said, “See that you make all things according to the pattern shown you on the mountain.” Heb 8:1-5

Every article and piece of furniture that we are reading about, is a copy of heavenly things. God uses visual aids that we can see in the natural, in order to teach man about Himself. This is why He made them male and female, and then revealed to Israel that He was their husband; that Jesus is our Bridegroom who is returning for His Bride. We know about bridegrooms and brides, husbands and wives. These are things we have experienced and can understand. When the Lord tells us He is our husband, we can begin to grasp the depth of His love and commitment toward us.

This is why He designed seeds and fields and trees and families with fathers and children, and then revealed Himself as our Father and we as His children. This is why almost all the parables of Jesus begin with, “The kingdom of heaven is like …” and then proceeds with a story about fathers and sons, landowners and servants, or seeds and fields. The tabernacle in the wilderness is the same: a structure in this natural world whose pattern and function witnesses or gives testimony of heavenly truths:

“Our fathers had the tabernacle of witness in the wilderness, as He appointed, instructing Moses to make it according to the pattern that he had seen,” Act 7:44

Now the LORD did not need the tabernacle in order to lead Israel through the wilderness. He had led them without a tabernacle for three months before He gave the instructions for it to Moses. He had told Moses that He wanted them to make Him a sanctuary, “that I may dwell among them,” (Exo 25:8). But Stephen the first martyr said before he was stoned:

“However, the Most High does not dwell in temples made with hands, as the prophet says:
‘ Heaven is My throne,
And earth is My footstool.
What house will you build for Me? says the LORD,
Or what is the place of My rest?
Has My hand not made all these things?’ ” Act 7:48-50

Stephen is not wrong, nor is the LORD in what He told Moses. God gave Israel the tabernacle to teach them (and us) how the omnipresent God who is greater than this natural universe, dwells with man. He is not limited to temples as the pagans thought of their idols. But He does desire to dwell with His people.

The Tabernacle, we are seeing, is in three parts: The Most Holy Place in the center, surrounded by the Holy Place. Then surrounding both of those, is the Outer Court, serving as a sort of a transition area or barrier, even, between the worldly and the heavenly. The Most Holy Place at the center, contains the ark of the covenant, housing the Ten Commandments, covered by the mercy seat, where the presence of God dwelt. The Holy Place contains the table of showbread, the menorah, and the altar of incense. The Outer Court contains the altar of offerings and sacrifices.

Yesterday we saw that the ark and the mercy seat teach us about our obedience to God, and His mercy which covers our disobedience – the design and function of a piece of furniture in the natural witnesses of spiritual truths. One of the spiritual truths an earthly piece of furniture like the altar teaches us, is that sin is atoned for by blood. That God accepts the blood of a substitute, instead of the blood of the sinner. One of the spiritual truths the design of the earthly outer court teaches us, is that there is only one gate – one way – through which man may enter God’s atonement and His presence.

Now consider this: the Most Holy Place corresponds to the heart of man, within which is kept the Law of God, for obedience and circumcision is a matter of the heart, not of rote obligation. It is in the heart that the Lord’s presence dwells with man. The Holy Place corresponds to the soul of man, the mind and emotions of man. There the bread of life is kept fresh before the Lord, and the light of life is kept lit before the Lord. What a powerful picture of the Word of God – our bread, and light (Mat 4:4, Psa 119:105), Amen? – kept continually renewed in our minds, morning and night, so that its living activity and influence on our hearts and minds does not cease. It is from the mind and emotions, moreover, that prayer ascends continually before God, as the smoke of the incense ascended continually before God (Rev 8:3-4). The Outer Court corresponds to the body. It is our body with interacts with the world. In the Outer Court was the altar which makes sacrifices for sin, which had to be offered continually, for the blood of bulls and goats could never take sin away, it can only cover it over. Only our High Priest can make atonement for our sins from the heart. He did this once and for all – symbolized by the Day of Atonement, where the high priest could only enter the Most Holy Place once per year with the blood of atonement.

There is a reason that to transgress this pattern and shadow was punishable by death. Through it, God was teaching Israel about her Messiah who was coming. The tabernacle itself is a prophecy of Messiah, but not only does the tabernacle prophesy of Jesus, He is the tabernacle, for He is Emmanuel, God with us.

But I saw no temple in it, for the Lord God Almighty and the Lamb are its temple. Rev 21:22

There are myriads of prophetic realities and heavenly truths revealed by the design and function of the earthly tabernacle. I encourage you to continue reading Brad Scott’s teaching series on the tabernacle, to learn more of these awesome truths in detail.