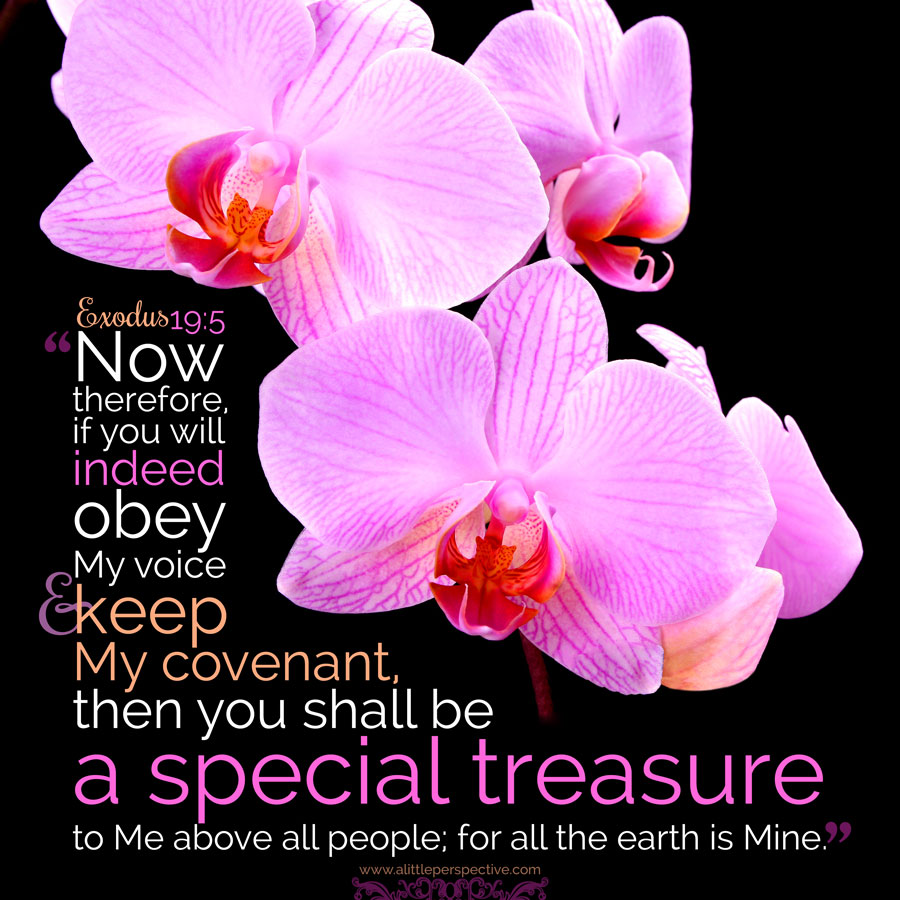 Exo 19:1-25 YHVH descended upon Sinai in fire, to enact the marriage covenant with Israel

Now therefore, if you will indeed hearken to My voice, and keep My covenant, then you shall be My own special treasure from among all peoples; for all the earth is Mine; Exo 19:5

Special treasure is Strong’s H5459, segullah, a concrete noun meaning, “jewel, wealth;” according to the Ancient Hebrew Lexicon, the noun is from סגל segul, an unused primitive root meaning, “to shut up.” The ancient pictographs are sin + gimel + lamed.

The story being told is of protecting (sin) that which has been gathered (gimel) and bound together (as a yoke, signified by the staff, lamed, binds a pair of oxen together). Thus “to shut up” would be the same idea as putting valuables in a safe or a vault. To YHVH, we are a segullah, a special treasure, above all the peoples on the face of the earth.

“ … and you shall be to Me a kingdom of priests, and a holy nation. These are the words which you shall speak to the children of Israel.” Exo 19:6

The story the ancient pictographs are telling is of the mighty (mem, but may also carry the meaning of a blood line) who use their authority (lamed) to bless (kaph).

The verbal root at the base of this family of words means “to stand” when used as a verb; “root” when used as a concrete noun, since it is the root which allows the plant to stand upright; and “surety” when used as an abstract concept. This  is because the opening (kaph) of the seed (nun), i.e., the going down of the root, supports the plant. He who supports, or mediates, stands between (chet) two parties. Thus the chet is in the center or middle position in the three-letter root to indicate standing between.

And all the people answered together, and said: “All that YHVH has spoken we will do.” And Moses reported the words of the people to YHVH. Exo 19:8

Do is Strong’s H6213 עשה asah, a primitive root meaning, “to do.” The modern three-letter root is ayin + shin + hey. The Ancient Hebrew Lexicon tells us that the shin was transposed from an original sin over time because of their similar sounds. So the original ancient pictographs were ayin + sin + hey.