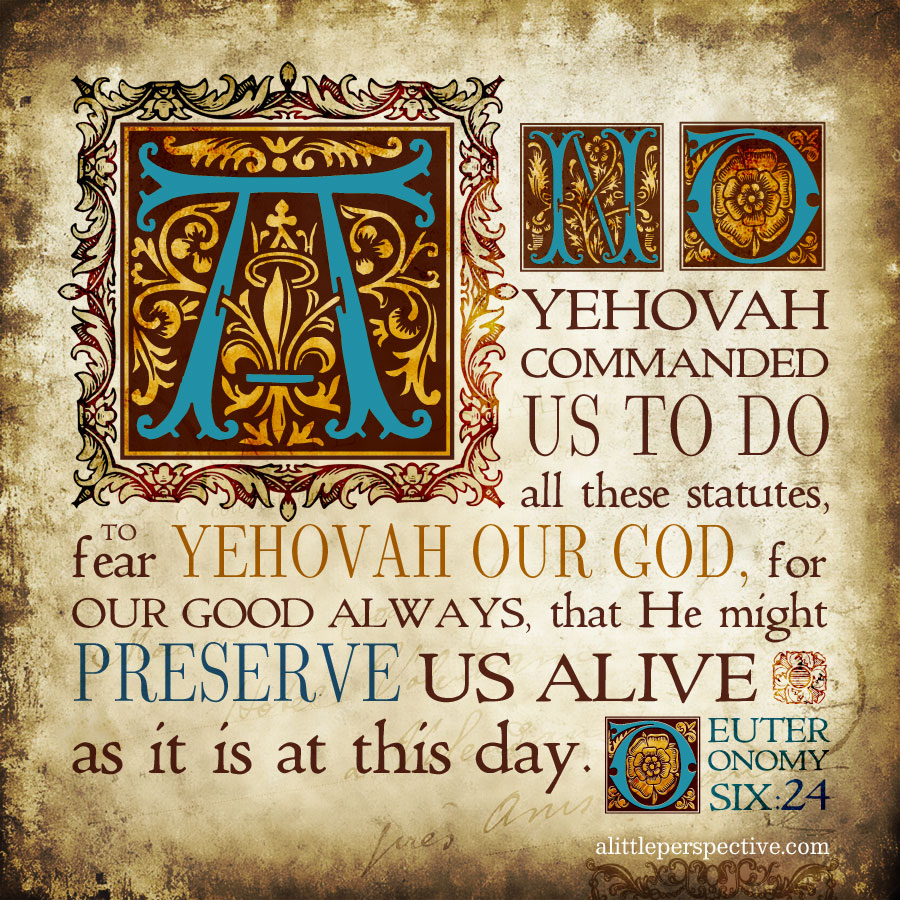 “When your son asks you in time to come, saying, ‘What is the meaning of the testimonies, the statutes, and the judgments which the LORD our God has commanded you?’ then you shall say to your son: ‘We were slaves of Pharaoh in Egypt, and the LORD brought us out of Egypt with a mighty hand; and the LORD showed signs and wonders before our eyes, great and severe, against Egypt, Pharaoh, and all his household. Then He brought us out from there, that He might bring us in, to give us the land of which He swore to our fathers. And the LORD commanded us to observe all these statutes, to fear the LORD our God, for our good always, that He might preserve us alive, as it is this day. Then it will be righteousness for us, if we are careful to observe all these commandments before the LORD our God, as He has commanded us.’” Deu 6:20-25

We learn several things about God’s way of teaching children through this parsha. First of all, if the parents are careful to do the commandments of the Lord, that doing will create a question within our children. The best teaching first creates questions, because when the children have the question, their heart is ready to receive the answer. There is a right time to teach – and that time is when the question about that thing has been created within the heart and mind.

Second, parents are responsible before God to create and maintain a relationship with their children, in which their children will be encouraged to come to their parents with their questions. Fathers cannot provoke their children to wrath (Eph 6:4), by ignoring them, being too busy with work or golf, being critical, impatient, or impossible to please, breaking promises, and things of that nature, that destroys the heart bond that God built in between parents and their children. If the heart bond is destroyed, the sons will not come to their fathers to ask them their questions, no matter how knowledgable their fathers are.

Third, there is a right answer for every question. The question, What does it mean that we keep these commandments, also has its right answer. Notice that the right answer is:

1) We were first delivered from slavery in the kingdom of Egypt;
2) We were delivered out of one kingdom in order to be delivered in to another kingdom;
3) In our new kingdom there are commandments to obey.

Deliverance from Egypt corresponds to deliverance from the kingdom of darkness, which is salvation. What commandments did Israel obey in order to be delivered from Egypt? Just one: apply the blood of the Passover Lamb to your doorposts. Thus we see that salvation in the Old Testament is exactly the same as salvation in the New Testament: it is achieved by grace through faith in the shed blood of the Lamb.

Dwelling in the land of Israel meant obeying the King whose land it was – who was YHVH, Creator of heaven and earth. Likewise dwelling in the kingdom of God means obeying the King whose Kingdom it is – YHVH, Creator of heaven and earth. We do not obey in order to be saved. But once we are saved, we do obey because all citizens of the kingdom of God obey the King of that Kingdom. Those who are outlaws (outside the Law) are outsiders and not citizens. They do not live as a citizen of that Kingdom, therefore the benefits of that Kingdom are not applied to them, and when they are discovered, they are shown the door (Mat 7:21-23).

This is what we are commanded in Torah to teach our children – that salvation by grace through faith with its new heart comes first (Eze 36:25-27), which means we are transferred out of Satan’s kingdom and into God’s kingdom, and in His kingdom he has given us commands to obey as King, for our good. We train them up in the nurture and admonition of the Lord – in His love, and in His discipline in walking in His ways, so that when they are old they will not depart from His ways (Pro 22:6), which is for their good always.

The theme of the parsha stumah from Deu 6:20-25 is to Teach to the next generation YHVH’s commandments that we have now heard, paid heed to, and are doing.