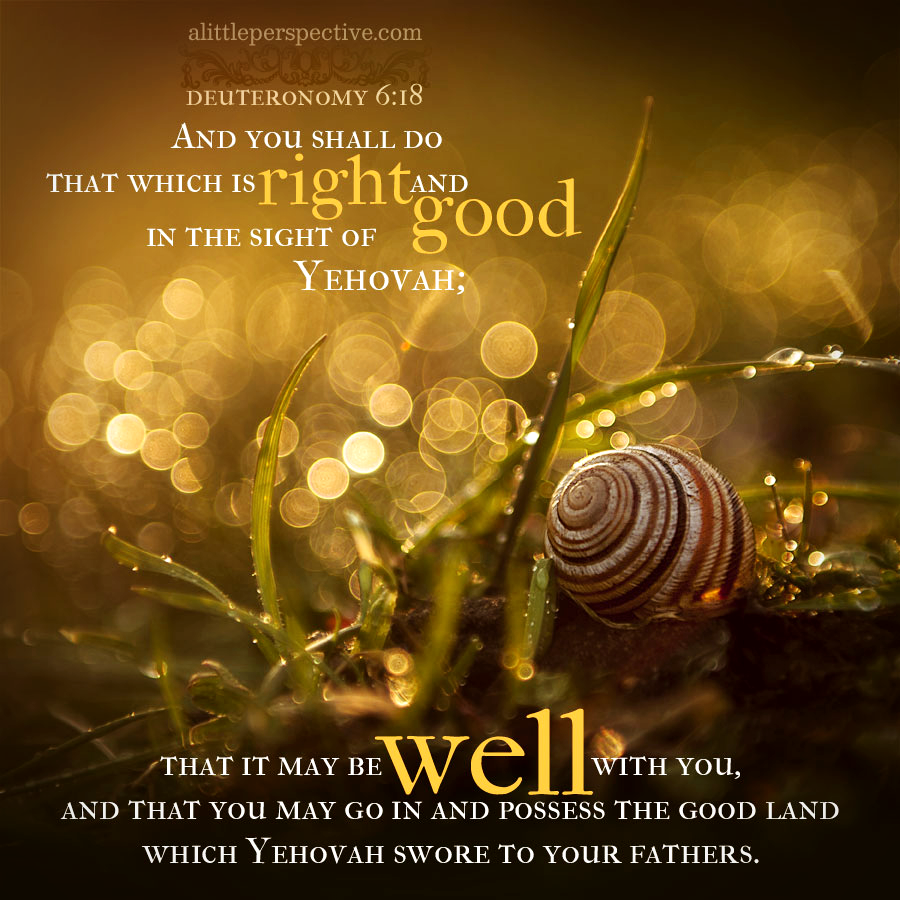 “You shall not tempt the LORD your God as you tempted Him in Massah. You shall diligently keep the commandments of the LORD your God, His testimonies, and His statutes which He has commanded you. And you shall do what is right and good in the sight of the LORD, that it may be well with you, and that you may go in and possess the good land of which the LORD swore to your fathers, to cast out all your enemies from before you, as the LORD has spoken.” Deu 6:16-19

The first verb in this parsha is do not tempt. The incident at Massah is recorded in Exo 17:1-7:

“Then all the congregation of the children of Israel set out on their journey from the Wilderness of Sin, according to the commandment of the LORD, and camped in Rephidim; but there was no water for the people to drink. Therefore the people contended with Moses, and said, “Give us water, that we may drink.” So Moses said to them, “Why do you contend with me? Why do you tempt the LORD?” And the people thirsted there for water, and the people complained against Moses, and said, “Why is it you have brought us up out of Egypt, to kill us and our children and our livestock with thirst?” So Moses cried out to the LORD, saying, “What shall I do with this people? They are almost ready to stone me!” And the LORD said to Moses, “Go on before the people, and take with you some of the elders of Israel. Also take in your hand your rod with which you struck the river, and go. Behold, I will stand before you there on the rock in Horeb; and you shall strike the rock, and water will come out of it, that the people may drink.” And Moses did so in the sight of the elders of Israel. So he called the name of the place Massah and Meribah, because of the contention of the children of Israel, and because they tempted the LORD, saying, “Is the LORD among us or not?”

The Hebrew word translated “tempt” is Strong’s H5254, נסה, nasah. It is from the root, נס, nun sin. The ancient pictographs are of the seed and the thorn. The seed is the continuation of life; the thorn grabs hold of clothing or fur. The meaning, then, is continuing to grab hold, or to lift up as a standard. The hey adds the man with his arms upraised as in wonder or worship; commonly a revelation. The lexicons say nasah means a test or a trial. A test reveals (hey) whether one ought to continue (nun) to be grabbed hold of (sin) to be lifted up.

I did not understand before why crying out for water was such a bad thing among the children of Israel. But looking at the Hebrew, I can see that what was going on was more than just asking for water. The children were saying, in essence, that because they were thirsty and there was no water, then YHVH has revealed (hey) or proved that He ought not to continue to be lifted up (nun samech) as God among them.

Therefore, do not tempt YHVH your God as you tempted Him at Massah. Do not have the attitude that He needs to continually prove to you whether He is worthy to be worshiped as God or not. That is part and parcel with receiving YHVH as the one God, the only God, who alone is God who no other is beside.

The next verb in this parsha is diligently keep His commandments, testimonies, and statutes. The Hebrew for “diligently keep” is Strong’s H8104, shamar. We have seen this word before, in the parsha before this one!

“… then beware (shamar), lest you forget the LORD who brought you out of the land of Egypt, from the house of bondage.” Deu 6:12

We saw that shamar had the mountain top meaning of closely guarding for the next generation that which was of first importance. The words “beware” and “diligently keep”, as well as “closely guard”, give us the sense that the way we preserve the worship of YHVH for the next generation, is to do the things He has commanded us to do. To observe His commandments, judgments, testimonies, and statutes.

The final verb in the parsha is do what is right and good in the sight of the Lord – which is revealed by His commandments, statutes, and testimonies. “Do” in Hebrew is Strong’s H6213, עשה, asah, ayin shin hey. The Ancient Hebrew Lexicon shows that this word is from the root, עס, ayin sin (the sin was transposed to shin over time because of their similar sounds). In the ancient pictographs, the ayin is the eye, so to look, watch, or know. The sin or samech is the thorn, so to grab hold, guard, or even hate. The verb form of this root is to do, the concrete form (noun) is work. The ancient pictographs came to mean “do, work” since man’s first work was to watch (ayin) for the thorns and thistles (sin) which would take over his crops:

“Cursed is the ground for your sake; In toil you shall eat of it All the days of your life. Both thorns and thistles it shall bring forth for you, And you shall eat the herb of the field. In the sweat of your face you shall eat bread Till you return to the ground …” Gen 3:17-19

The addition of the hey, the man with his arms upraised as if in wonder, revelation, or worship, adds the element that a man is to do with all his might, whatever his hand finds (hey) to do (Ecc 9:10).

The theme of the parsha stumah from Deu 6:16-19 is to Do and Observe YHVH’s commandments that we have now heard and paid heed to.