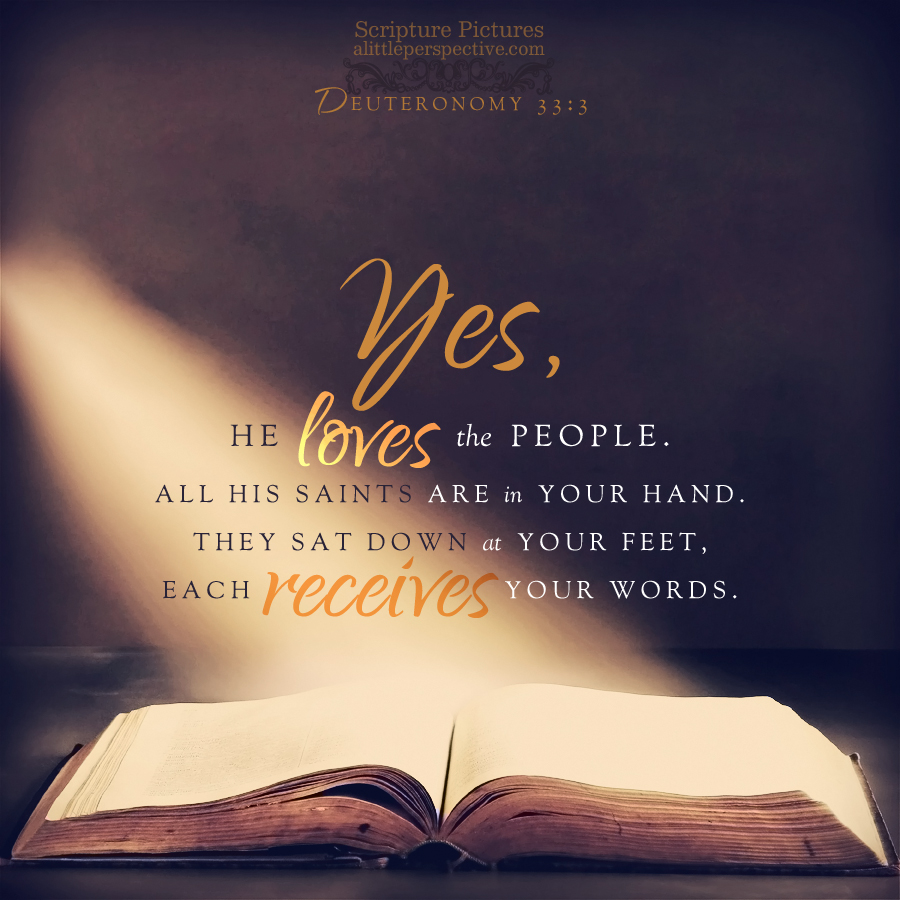 Read Deuteronomy 33 and 34 at Bible Gateway.

Yes, He loves the people;
All His saints are in Your hand;
They sit down at Your feet;
Everyone receives Your words. Deu 33:3

I believe this to be a Messianic prophecy of Yeshua:

But the multitudes saw them departing, and many knew Him and ran there on foot from all the cities. They arrived before them and came together to Him. And Jesus, when He came out, saw a great multitude and was moved with compassion for them, because they were like sheep not having a shepherd. So He began to teach them many things. Mar 6:33-34

Another Messianic prophecy is the final paragraph of Deuteronomy: the death of Moses the servant of the LORD + Joshua (which is Yeshua in Hebrew), ending with the uniqueness of Moses that there has not, to date, been a prophet like him. Moses himself said there would arise a Prophet like him: who is Messiah Yeshua, who surpassed Moses for miraculous works. You know, we are the children of God. He teaches us as if we were in Scripture kindergarten, really. The topic of the final paragraph: the death of Moses the servant of the Lord + Yeshua + a Prophet like Moses. Yeshua also died. Moses’ burial place is hidden. No one can go to Moses’ tomb and look at his bones. Yeshua’s tomb is also empty, and His bones are also not to be found, because He has risen from the dead. The prophecy is so plain it is nearly shouting from the page!

In fact, Messianic prophecies of Yeshua are in nearly every chapter in Deuteronomy. Some of them that I have found:

” … but showing mercy to thousands, to those who love Me and keep My commandments.” Deu 5:10

Let us remember that in the tabernacle, the mercy seat covers the ark, in which are contained the two tablets of the Ten Commandments! Of course God does not mean, that He will show mercy only if the commandments are kept perfectly, without the slightest error. For then why would mercy be necessary?

But the one who loves God, and who expresses his love for God in the way that God finds meaningful, by obedience to His commandments as a way of life, as an attitude of the heart, ever seeking greater obedience out of love for God, God shows him mercy. His mercy is in Messiah Yeshua, who nailed the list of our transgressions of the commandments to the cross with Him (Col 2:14).

1a) Deu 8:1, That Israel shall observe YHVH’s commandments;

1c) Deu 8:2b, Wilderness humbling and testing + what was in the heart;

1e) Deu 8:3b-4, Provision in the wilderness: the word from the mouth of YHVH;

central axis) Deu 8:10, “When you have eaten and are full, then you shall bless the LORD your God for the good land which He has given you.”

2g) Deu 8:11-14, Do not forget YHVH by not keeping His commandments + abundant blessing;

2f) Deu 8:15a, Fiery serpents in the wilderness (chastening);

2e) Deu 8:15b, Provision in the wilderness: the water from the rock;

2a) Deu 8:18b, That He may establish His covenant with Israel.

Look at the D and E pairs. The manna is the bread from heaven (Joh 6:51), who is Messiah Yeshua, the word from the mouth of YHVH. Yeshua is the rock which provided water for them in the wilderness (1 Cor 10:4).

“So none of the accursed things shall remain in your hand, that the LORD may turn from the fierceness of His anger and show you mercy, have compassion on you and multiply you, just as He swore to your fathers.” Deu 13:17

The fierceness of the LORD’s anger is reserved for the accursed thing. Isa 53:10 says of Messiah, that it pleased the LORD to crush Him. When Jesus was on the cross, accursed, He drank the cup of the LORD’s wrath, and so turned His fierce anger away from Israel, so that the LORD could show us mercy and compassion, as at this day. This was the cup that Jesus asked to pass from Him if possible in the Garden of Gethsemane (Mat 26:39), because His wrath against sin is fierce.

“If a man has committed a sin deserving of death, you shall put him to death, and you shall hang him on a tree. His body shall not remain overnight on the tree, but you shall surely bury him that day, so that you do not defile the land which the LORD your God is giving you as an inheritance; for he who is hanged is accursed of God.” Deu 21:22-23

“Therefore, because it was the Preparation Day, that the bodies should not remain on the cross on the Sabbath (for that Sabbath was a high day), the Jews asked Pilate that their legs might be broken, and that they might be taken away.” Joh 19:31

“Christ has redeemed us from the curse of the law, having become a curse for us (for it is written, ‘Cursed in everyone who hangs on a tree’), …” Gal 3:13

Deu 24:1-4 contains the law of divorce and remarriage. We have noted a few times that the covenant at Sinai was a marriage covenant between YHVH and Israel. Now, when a husband divorces his wife, and she joins herself to another, the first husband cannot remarry his wife again after another man has had her, for that is an abomination. I don’t necessarily understand why it is, but I accept that God is smarter than I am and I accept that it is. Now, did you realize that God divorced Israel His wife because she was an adulterous wife (Jer 3:8)? She went and joined herself to another – her false gods that she went after. If she repents, He cannot remarry her. So what did God do? He died. Upon the death of the first husband, she is now free to marry whomever she wishes (Rom 7:1-4), and now the ekklesia, the assembly of believers, is betrothed to her husband – Jesus Christ, who is returning as a Bridegroom for His Bride!

“Cursed is the one who does not confirm all the words of this Law.” Deu 27:26

“For as many as are of the works of the Law are under the curse; for it is written, “Cursed is everyone who does not continue in all things which are written in the book of the law, to do them.” … Christ has redeemed us from the curse of the Law, having become a curse for us.” Gal 3:10, 13

Those who are of the works of the Law, that Paul is speaking about, are those who are trying to achieve salvation or justification by obedience to the Law rather than by faith in the Lord Jesus Christ, as a complete reading of Galatians in context will show. If we are in Him, the list of our transgressions of the Law has been nailed to the cross (Col 2:14).

These words of YHVH, and these commandments which He spoke with His own voice before Israel, became flesh and dwelt among us, full of grace and truth. The Word is Messiah. He is very near us, even in our hearts, that we may do His Word, even all His commandments which are not burdensome (1 Joh 5:3).