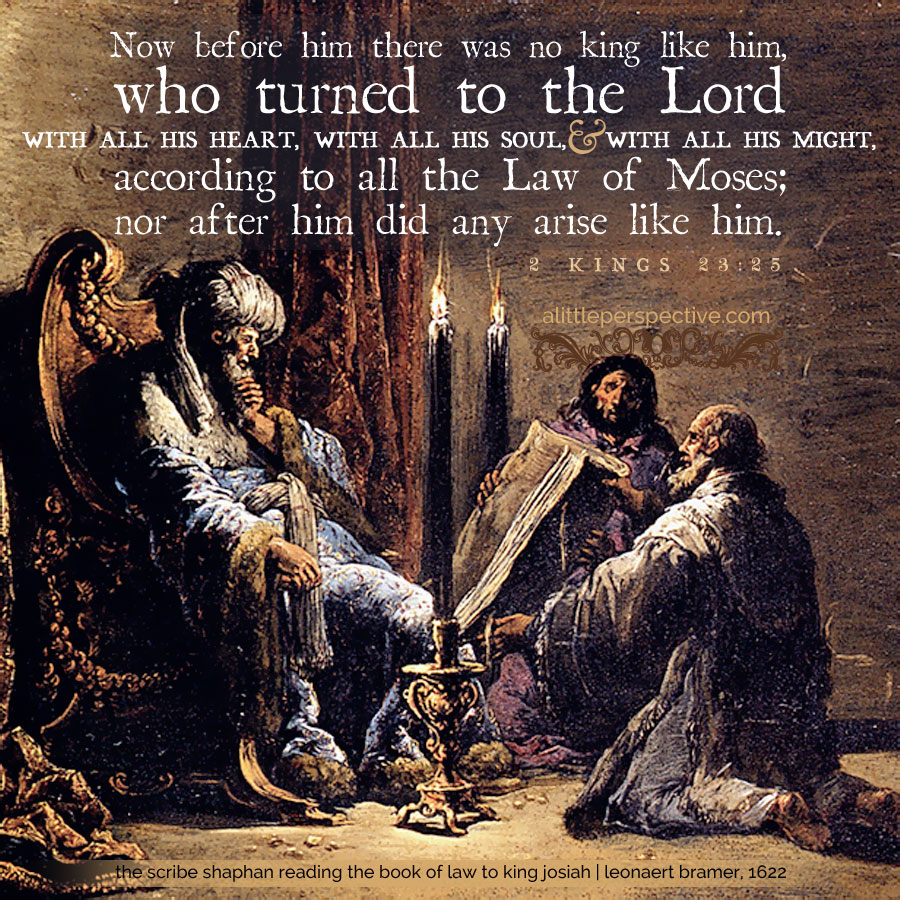 Judah and Jerusalem were under a death sentence because of their transgressions of the Law (2 Kin 22:16-17). But Josiah the king was delivered from certain death (2 Kin 22:18-20), and as long as Josiah was Judah’s king, the death sentence against Judah was reprieved for his sake. This is a sign of Messiah that we have seen before: the sign of resurrection, deliverance from death, and life in the face of certain death. There is a second witness that Josiah is a type of Messiah, because his reign paints a picture of the gospel of grace. Mankind is also under a death sentence because of our transgressions of the Law, but when Messiah is our king, the death sentence against us is lifted for His sake.

Here is the third witness that Josiah is a type of Messiah (three, a sign of Messiah in Scripture!):

Moreover Josiah put away those who consulted mediums and spiritists, the household gods and idols, all the abominations that were seen in the land of Judah and in Jerusalem, that he might perform the words of the law which were written in the book that Hilkiah the priest found in the house of the LORD. Now before him there was no king like him, who turned to the LORD with all his heart, with all his soul, and with all his might, according to all the Law of Moses; nor after him did any arise like him. 2 Kin 23:24-25

He stood out above all the kings before him and after him. He was singular among the sons of David. All of the kings of Judah, the sons of David, which have been types of Messiah, have had this same testimony of preeminence in something: Solomon, Hezekiah, and now Josiah.

Now as Josiah’s reign was a type of Messiah’s reign, there is something that we as the church must see. When he made the covenant of grace between God and the people, the idols, wooden images, and booths for ritual prostitution still filled the Temple. When we enter into our covenant with the LORD our God, through the blood of Yeshua our Lord, God accepts us as we are. Our life might still be filled with uncleanness and abominations, but that does not stop Him from embracing us wholeheartedly. In other words, salvation comes first. We enter into the Father- child relationship with YHVH, the Creator of heaven and earth! The state of our hearts is made right before Him. This is what the New Testament calls justification — setting us in right standing with God.

But Josiah did not stop with only making the covenant. He then began cleaning the uncleanness, one uncleanness at a time. He defiled the abominations and burned them in fire, then scattered the ashes, so that no trace of them was left. He not only took away the works of unrighteousness in Judah and Israel — cleansing the land of idolatry– but he added to Judah and Israel works of righteousness — they started keeping the Passover. This is what the New Testament calls sanctification — out of the right state of our hearts, that we receive by grace through faith, flows right actions, or works of righteousness.

Performance has a bad name in Christianity, and listen, we cannot earn justification by our performance of the words of the Law. That was an error that needed correcting in the church. But let us not dive into another error just as bad: let us not throw out performance, or obedience, to the words of the Law because we cannot be justified that way. Jesus will establish Torah as the rule of Law in His kingdom. His kingdom will come, and when it does, the will of His Father will be done on earth, just as it is in heaven.

His kingdom can come in our lives and in our households, today, as we establish obedience to His commands as King of our lives, today. We can voluntarily bend our knee to our King. We do not have to wait for His bodily return and have obedience imposed upon us!