Let’s talk about THIS. Not because this pudknocker is significant but because this is the ol’ Soviet way of attempting to discredit dissenters. These Soviet knockoffs do it to @realDonaldTrump all the time. 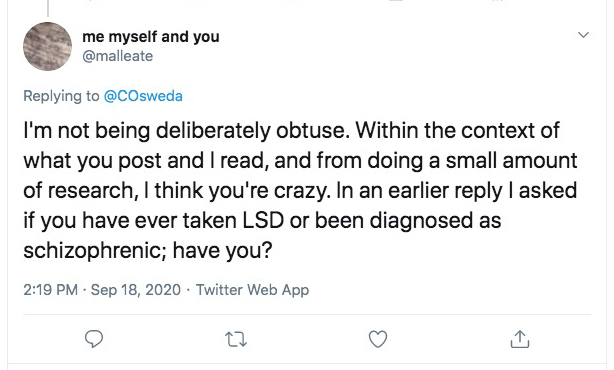 As a layman, this imitation-Soviet pudknocker has no idea what schizophrenia is. Schizophrenia is a chronic psychiatric disorder that functions essentially as a psychosis. It’s characterized by “positive” and “negative” symptoms.

Positive symptoms are those found in schizophrenics but not in healthy individuals. These are:

Negative symptoms are traits ABSENT in schizophrenics but present in healthy individuals. It’s easier to put the definition before the term:

Speaking much less than a healthy person – reduced speech.

Absence of will to do anything – lack of initiative.

The Diagnostic and Statistical Manual of Mental Disorders (DSM–5) states that to be diagnosed as a schizophrenic, you must exhibit ONE OR MORE positive symptoms and ONE OR MORE negative symptoms for at least a month.

Needless to say, not only am I NOT a schizophrenic, only a zero-information pudknocker would ask if I were. As I’ve said before, there’s no such thing as science. Only SCIENTISTS. And too many of them have no scruples.

My ex-girlfriend MARRIED her psychiatrist.

He’s a rabid San Francisco Democrat. And now she lives in hell.

She was a Ted Bundy level game player. I couldn’t see it at the time. Her husband was BETTER AT IT. She lives in Greenbrae, in a gilded prison. And I don’t care.

Pudknockers think they can upset me. I laugh, because they’d DIE if they spent three seconds inside my head.

As I’ve said MANY TIMES, I took mushrooms once, but it was a “prank.” They lied to me about the potency.

Worst night of my life.

The same thing happened with peyote. Got tricked into taking it.

That’s it for my hallucinogen adventures.

The reason I drank, smoked pot, and did speed and meth was to obliterate myself.

I stopped it all in one day. Not hard. No relapses.

I read up on stopping, and I knew that none of it would work for me. So I did it alone.

I’ve undergone talk therapy twice. The first time I got the psychiatrist to agree to pull no punches. I had to find out why I was so effed up.

He hit me as hard as he could–but not sadistically. He always stopped and asked me how I was doing. I could take it. BECAUSE IT WAS ALL TRUE.

That’s why I’m not impressed when some jackass psychiatrist “diagnoses” Trump. They’re all Soviet knockoffs.

Trump is exactly the opposite of what they claim.

Don’t be impressed by psychiatrists. Serial killers fool them all the time. To be a GOOD psychiatrist, you have to be OBJECTIVE. Political partisans can’t be objective.

People who come after me on the mental-health issue base everything on movies.

NOT ONE MOVIE VILLAIN HAS A REAL MENTAL ILLNESS. Not Hannibal Lecter, not Joker, not the murderers of Capote’s In Cold Blood. These are Hollywood inventions.

The Girl with the Dragon Tattoo. This villain IS NOT REAL. He has NO GENUINE PATHOLOGY.

I don’t watch these movies because they’re BORING. When you’ve seen the real thing up close, none of these pale imitations can hold you attention.

I watch horror-move BLOOPERS and gag reels. They make me laugh out loud because everyone’s having FUN.

Unlike Soviet knockoffs, I find humor in most things.

NEVER the suffering of others.

Soviet knockoffs do nothing EXCEPT inflict suffering. Especially on dissenters.

“You don’t know what pain is.” –Buffalo Bill

I hear you, shy perpetual companion,

Never wholly failed upon my twilight.”

My entire life has been a twilight, with pain as my constant companion. So you pudknockers can’t do anything to me. Especially when your brains are so mediocre.

Trump wins on election night. Count on it.