You are here: Home / Perspective / america and nation / principle vs. politics

The current brouhaha on whether President Trump shall or shall not nominate someone to fill the Supreme Court seat left vacant by the passing of Ruth Bader Ginsberg, is at its heart a debate over principle vs. politics.

Here’s what the Constitution says:

Whether a sitting president should nominate a Supreme Court Justice in an election year wasn’t such a big deal before the fall of 2013. In the fall of 2013, a Democrat, Barack Obama, was President, and there was also a Democrat majority in the Senate. But the Democrats did not have a 60-vote majority, and the Republicans held up the worst nominations by taking advantage of the weak Democrat majority and obstructing their appointments. It was a long-standing Senate rule that a 60-vote majority was required to end such obstruction.

In the fall of 2013, the Senate rules were changed by a simple Democrat majority, to amend the Senate rule on a 60-vote majority. Neither party had taken this step before, because they were used to operating on established principle rather than political expendiency.

It was principled to set the bar at a 60-vote majority, often requiring a consensus of both parties to make a rule change, thus more likely ensuring that the change, whatever it might be, would benefit the nation, and not a single party.

But in 2013, the Democrat majority amended the 60-vote rule based on political expediency. It was called the nuclear option, and it allowed a simple Democrat majority to end Republican objection to extreme nominees. The Democrat-controlled Senate could pass the Democrat President’s agenda without input from Republicans, thank you. As the President famously said, “Elections have consequences.”

In 2016 the very issue facing us today had its test. In 2016 we still had a Democrat President, but this time a Republican majority Senate. Justice Antonin Scalia passed away unexpectedly, creating a vacancy on the Supreme Court in a presidential election year. Mitch McConnell, now the Senate Majority Leader, was in favor of keeping the seat open to allow the next President to fill it. Obviously he was hoping for a Republican President, but he didn’t know.

At the time, all the top Democrats weighed in on the debate:

“The President is elected for four years, not three years, so the powers that he has in year three continue into year four. Maybe some members of the Senate will wake up and appreciate that that’s how it should be.”

“When there is a vacancy on the SCOTUS, the President is to nominate someone, the Senate is to consider that nomination… There’s no unwritten law that says that it can only be done on off-years. That’s not in the Constitution text.”

“Folks, here’s how it works. For seventeen years I was chairman or ranking member, as the top opposition party person, in the Senate judiciary committee, which oversees nominations to the courts, all courts, all federal courts. I presided over nine Supreme Court nominees, more than anyone alive. Some I supported, and others I didn’t. But every nominee was greeted by committee members, every nominee got a committee hearing, every nominee got out of the committee to the Senate floor even when the nominee didn’t receive, under the rules, a majority support in the committee to be reported out, because I thought the Senate should advise and consent, not the committee. And every nominee, including Justice Kennedy, in an election year,  got an up or down vote by the Senate. Not much of the time, not most of the time, every single time. That’s the Constitution’s clear rule of advise and consent.”

“My thoughts and prayers are with the family and friends of Justice Scalia as they mourn his sudden passing. I did not hold Justice Scalia’s views, but he was a dedicated public servant who brought energy and passion to the bench.

The Republicans in the Senate and on the campaign trail who are calling for Justice Scalia’s seat to remain vacant dishonor our Constitution. The Senate has a constitutional responsibility here that it cannot abdicate for partisan political reasons.”

“He loved the Constitution, and I hope that we could follow it in his honor. However, the Republicans have a breathtaking refusal to meet their constitutional duty to give Justice Scalia’s replacement a timely vote, and a fair hearing. The Republicans’ contempt for functioning government, and their disrespect for the President knows no bounds. Evidently it isn’t enough for the Republicans to merely shut down government, or threaten the full faith and credit of the United States of America, they must sabotage the Supreme Court too. Republicans have obstructed the Congress, have obstructed the President, and now they want to obstruct the Court.”

Today’s top Democrats are all on record, in 2016, urging the filling of a vacant seat, claiming it on the grounds of principle and not expediency.

If the Democrats in 2013 had heeded Mitch McConnell’s advice, they would not be in this boat today. The Senate would still require its 60 -vote majority, and they could obstruct a nominee they did not like even as the minority party in the Senate. 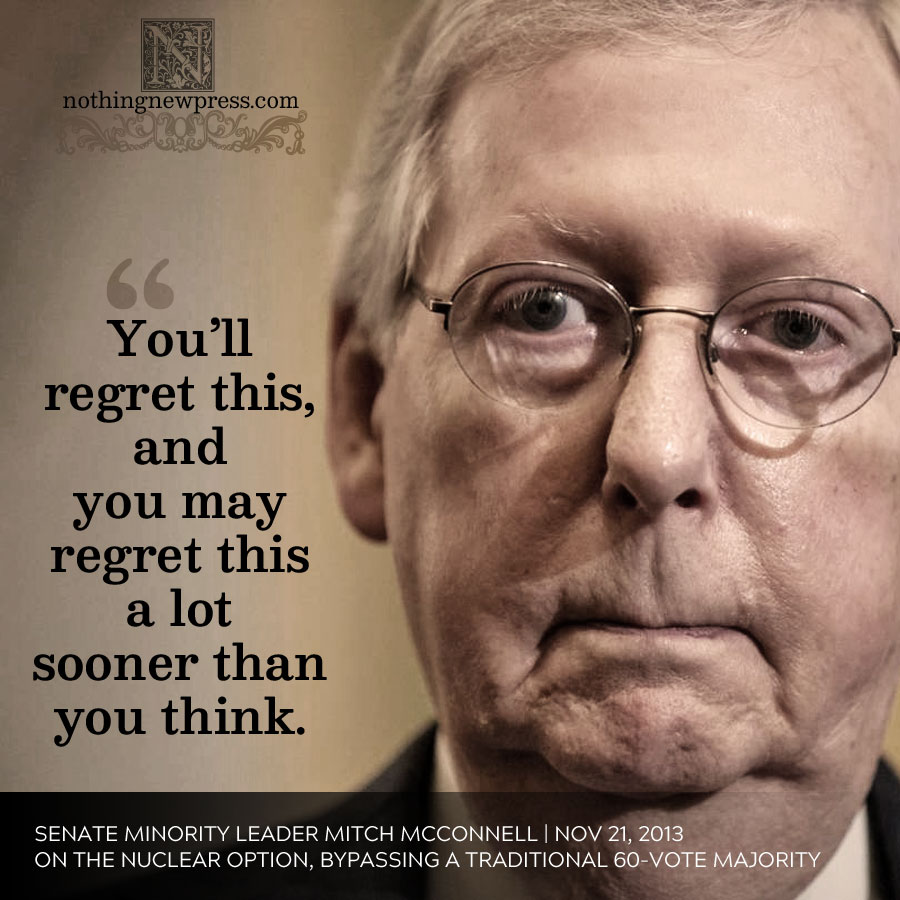