You’ll get a good laugh out of this one, the way @realDonaldTrump did, I’m sure. Another pre-failed Democratic plan.

“A Democrat-aligned political action committee is planning to deploy technology initially developed to counter terrorist propaganda to combat President Trump’s campaign messages about the coronavirus — an effort that will benefit his challenger, Joe Biden, according to a report.”

“Tech expert Chiris Hougland, who received initial funding from DARPA, the Pentagon’s research arm, as part of an endeavor to fight terrorism overseas, is heading up the initiative.” 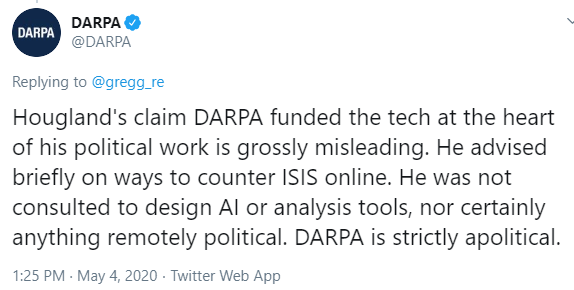 Second, this is a FAILED Obama-era plan.

Why did it fail? Because the people running it had ZERO KNOWLEDGE of the people they were trying to reach. Now they’re doing it all over again. THEY DON’T KNOW ANYTHING ABOUT TRUMP SUPPORTERS.

Now, I’ve spoken to GROUND TROOPS who served in Iraq and Afghanistan. THEY knew the people. And EVERYTHING THEY DID THAT WORKED was ordered stopped by their superiors.

In Muslim cultures, you make restitution immediately, even if it’s only symbolic. Ground troops were allotted CASH to pay for damage that the locals said was incurred at the hands of Americans. IT WAS A PITTANCE. The Americans admitted to being wrong, apologized, and paid up.

WE WERE OCCUPYING THEIR COUNTRIES. They HAD to do things to regain “face.” By apologizing and providing restitution, our troops kept the peace.

The locals said to others, “These aren’t bad people. They listen, and they do as we ask.”

THE SUPERIORS CANCELED THIS. It made us look “WEAK” when we had to look STRONG.

It showed that we respected FACE.

Another thing I heard:

Every see this movie?

Some troops wrote “Dirka dirka Mohammed jihad” on the sides of their vehicles. THE LOCALS ALWAYS LAUGHED because the movie was legendary IN IRAQ for making Americans look STUPID. It was an icebreaker. The locals would ask about it, and Americans would ask THEM for help.

“We need to know what to do so we don’t come across like the idiots in the movie.”

And of course the superiors ORDERED THIS TO STOP because it was offensive and disrespectful.

At the start of the Iraq occupation, a western group distributed hundreds of video cameras to locals.

The Iraqis went out and filmed whatever they wanted, and the footage was made into a documentary called Voices of Iraq.

GUESS WHAT THE IRAQIS SAID ABOUT ABU GHARIB?

They said that all Iraqi men now WANTED to go to the prison, because how else would they have the chance of American women fondling their penises?

The Democrats’ Defeat Disinfo will fail for EXACTLY the same reason that the Obama-era attempt to defeat jihadist propaganda failed.

The plan is to recruit “social media influencers” to counter Trump’s “lies.”

But the whole thing is based on a lie!

This is what the Chinese and Russians do. They put out ridiculous claims with nothing to back them up.

(DAMMIT! I went with the New York Post’s MISNAMING of Hougland. His name is CURTIS, not Chris. FACT CHECK EVERYTHING, boys and girls. My bad.)

(Actually the Post called him “Chiris.” Google autocorrected to “Chris,” And that’s how I screwed up. Everybody name your name child “Chiris.” It covers all genders and species.)

So: CURTIS Hougland himself says this project will fail:

“Hougland also deconstructs digital messaging in the current political cycle, saying that ‘Democrats are too precious’ and prone to ‘risk-aversion’ on social media, which ‘really limits our ability to be candid, authentic and honest.'”

“In contrast, President Trump obviously has no filter, which not only pleases his base but keeps them endlessly engaged.”

“‘Volume wins,’ Hougland says. ‘Donald Trump knows this, and brands increasingly are realizing this … The more breadcrumbs you have on the internet … the better your sales are doing, or the more likely you are to win an election.'”

Finally, I know that ALL TRUMP SUPPORTERS–except for the NervousNellies–can see the glaring hole in all of this:

The Democrats always relying on MESSAGING, not DELIVERING. ALL politicians before Trump felt that their job was to “message” and then relax for a few years.

WHO COULD BLAME THEM? We kept rewarding people who never kept their promises.

Trump has delivered more than almost a full century of presidents. That means he wins. Period.

Trump supporters vote on RESULTS, not words. Nobody can match Trump in results. Therefore we reward him. We want to see what he’ll do next. WE ARE ON FIRE TO SEE.

The Democrats are making the fatal error of ATTACKING Trump supporters as stupid, racist, fascist, murderous, and whatever else they say.

HOW IN THE NAMER OF ZEUS WILL THAT MAKE US VOTE FOR THEM?

The polite ones were treated with respect. In Scotland, they mingled with the Brits, spoke English to them, and allowed them to examine the Junkers Ju-52 transport.

The Democrats are the arrogant Nazis, making demands in their defeat. They SAY that if Trump wins, they RAMP UP the violence.

Trump has no reason to hold back after his reelection.

As in, THAT VERY NIGHT. I wish the rioters well.