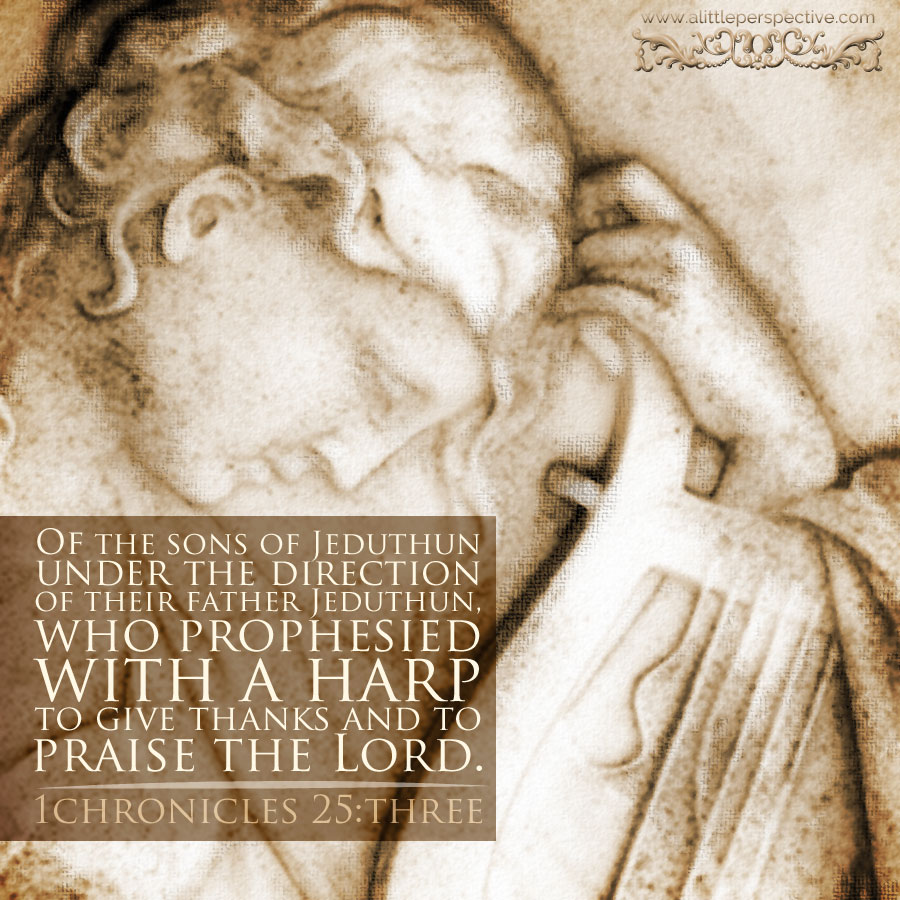 David assigned the priests, the sons of Aaron, in their divisions, 24 divisions in all. Two divisions served each month at the tabernacle. Since there was a morning sacrifice, and an evening sacrifice, every day, then one division served in the morning shift, and one division served in the evening shift. But now there was a schedule of service, so that the tabernacle would experience no lack, and the priests likewise would experience no idleness (as had happened in the days of King Saul).

Asaph, Heman, and Jeduthun were of the 4000 Levites who were assigned to be musicians (1 Chr 23:5). Asaph was skilled and very great. David wrote the majority of the Psalms in the book of Psalms, but Asaph wrote the next in number. He prophesied in singing, in other words, he wrote songs under the direction and inspiration of the Holy Spirit, and they were added to the book of Psalms, which means they were ‘Thus saith the LORD,’ the word of God. The name Asaph means “collector” or “gatherer,” and I think his name was prophetic of his identity and destiny in the LORD (as I believe most names are), because he collected the songs of the LORD and wrote them down and preserved them.

Heman means “faithful;” he was one of the king’s seers or prophets. But because Heman the seer was assigned with the musicians, he also “prophesied in song,” and his sons after him. His songs were like prayers to the LORD that were completely in line with the LORD’s heart and what He is doing in the earth at that moment. Prophetic songs and prayers sing and speak the LORD’s heart, His word, His truth, out and over a situation or people. The prophecy in song is Spirit- inspired, and not necessarily foretelling the future, however the future could be told; many of the Psalms are prophetic about the Messianic kingdom, for example.

Prophetic worship, prophesying in song during the worship service, is increasing in the churches in our days, for the LORD is restoring by His Spirit, His worship in Spirit and truth. Worship leaders like Misty Edwards (IHOP Kansas City) have spread the idea and practice. IHOP Kansas City got the idea for continual praise going up before the LORD, 24/7, with worshipers in teams taking shifts, from this practice and schedule that King David instituted.  You know, the things of the Spirit in our churches that we think are new, are in fact old, LOL. God was working His patterns of worship in Israel, long before the coming of Jesus. He is the same, yesterday, today, and forever, and His Spirit is the same yesterday, today, and forever.

Jeduthun means “laudatory” or praiseworthy. Think of these three as the worship leaders. Asaph wrote the songs, with Heman helping. Heman directed the choirs, the singers. And Jeduthun directed the instruments (1 Chr 25:6).

The musicians were divided into 24 divisions, as the priests were. A set of Levites accompanied each set of priests. Two divisions were serving at the tabernacle at any one time (each set served for one month, two groups of priests, and two groups of Levites, which included musicians, gatekeepers, caretakers of the vessels, etc.) This is because sacrifices were offered morning and evening, and praise was offered morning and evening accompanying the sacrifices, so there was a morning shift, and an evening shift. (The worship, as we saw in Leviticus, that which draws one near to God, was the offering of the sacrifices. The music, the praise and thanksgiving, accompanied the worship of sacrifices.) If you were a priest or a Levite, you were off eleven months of the year, but you worked HARD for the one month you served in the tabernacle. And when you were in your “off” time, you still practiced or taught music, or taught the Law, or taught Torah at schools, or served as a judge.

We are also a royal priesthood (1 Pet 2:9), and we also, any of us who makes himself a vessel for honorable use (2 Tim 2:21), can serve as a singer, musician, prophet, helper or servant, gatekeeper, treasurer, meeter of needs, administrator, or judge. Paul’s list of gifts in Rom 12 did not come out of thin air, but are rooted in these divisions for service into which King David, a prophetic type of Messiah Yeshua, divided the Levites.