You are here: Home / Perspective / education / unlocking the power of the mind 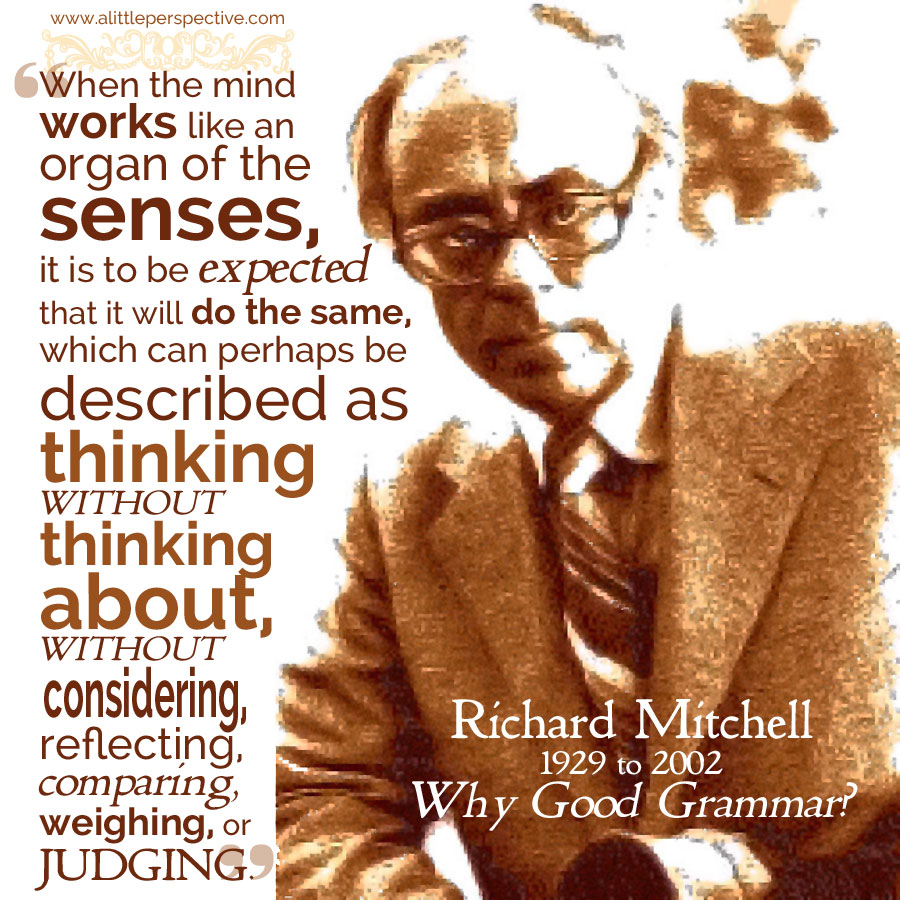 I first ran across this concept in an essay by professor of English and Classics, Richard Mitchell, Why Good Grammar? (Read the whole thing; it is enlightening).

In any mouth or pen, grammatical habits, especially those more important to writing than to speech, present a miniature character sketch or autobiography. Many of the attributes therein revealed are personal, and some collective, social, or even ethnic, and, strictly speaking, none of a teacher’s business, and that is so whether the unwitting autobiographer is the student I am supposed to teach or the academic vice-president who is supposed to be more academic than I. Most of those little gaucheries and solecisms that make us think that we ought to teach more grammar are only the habits of a mind in a certain condition, a condition to whose cure all of us have supposedly chosen to devote our lives.

I know of no specific name for the condition I have in mind, and I find it hard to describe. Although it is a kind of thoughtlessness, or unknowing, it is not truly what we usually mean by ignorance–the simple lack of information. Nor is it dullness of mind, or stupidity, whatever we might mean by that. It is that condition in which the mind takes but little, or takes but rarely, the grasp of itself. Although it isn’t necessarily caused, or perpetuated by a lack of reading, or cured, either, by a glut of reading, it is nevertheless the condition to which we seem vaguely to point when we sit around and complain that our students seem never to have read anything.

While I would not want to make a habit of it, I will for now call that condition “inducation,” the state of being led into something, rather than out of it, as “education” suggests. But even that idea is not quite enough, for the condition I have in mind is not accurately described as one into which we are led, but one in which we are left, and out of which we might be led. In its purest form, it is the condition in which the mind operates like an organ of the senses, thinking what it must think in response to the suggestions of its environment, as the ear hears whatever it can hear and the open eye must see whatever lies before it.

As Holmes often remarked to Watson, it is not at all uncommon for the eye to see without noticing, and when the mind works like an organ of the senses, it is to be expected that it will do the same, which can perhaps be described as thinking without thinking about, without considering, reflecting, comparing, weighing, or judging. It is the condition in which the mind serves as a registry, a perpetual catalog of whatever presents itself. That condition is not only one in which we are born, but one into which we fall continually, and into which, it must be admitted, we had better fall in the ordinary course of daily life, lest we find ourselves walking into closed doors and driving our cars on the other side of the road.

Consider now the opposite condition, the one in which the mind, still the hapless receiver of the world about it, can nevertheless withdraw far enough so that it can, and will, consider, reflect, compare, weigh, and judge–comment, as it were, on the items in its register. How are those acts performed? What evidence have we, and what evidence can we provide, either of their existence or their conclusions? The form in which they exist, and the only form in which they can exist, is language, nothing but language. They are acts of language, which are to the mind what motion is to the body.

Mitchell describes the mind, as all human beings are born, as a receiver of the suggestions of its environment. It operates like an organ of the senses: just as the eye sees whatever is before it, and the ear hears whatever enters into it, so the mind thinks whatever is suggested by the items on its registry – what thoughts it has received through the senses. It lacks the power or ability to think anything else, and lacks the ability to take the grasp of itself.

The word “education” comes from the Latin root, ducere, ‘to lead.’ “Education,” then, is a leading out of. Out of what? Out of the powerlessness of the mind, into which we are all born. “Inducation” is a leading in to. But what often happens in the Prussian-based model of schooling (such as we have in America’s public schools), is neither education or inducation. It is what the word would be from the Latin, meaning, being left in. It is twelve years of carefully crafted busy-ness designed not to disturb the mind as a sense organ, so that the mind receives whatever is suggested by its environment, and registers it as its own thought (therefore accepting it as true). Thus society has carefully maintained the cogs it needs for the machine of government and culture to run smoothly, built in its own image.

True education, however, leads a child out of the state of his mind into which he is born, and gives him the power and ability to step back from what has been suggested, to think about it. To consider it, reflect upon it, compare it, analyze it for truth, weigh it, and judge its wisdom. That is the power of the mind.

How do we give children the power of their minds? By giving them the tools of learning, what classicists call the stages of grammar, dialectic, and rhetoric, but what Scripture calls knowledge, understanding, and wisdom.