You are here: Home / Bible Study / teaching tools / What is a Chiastic Structure?

The Scriptures, Old and New Testaments, contain chiastic structures from beginning to end. They are one of the thumbprints of God on His Word, that reveal a single divine author from beginning to end, as their beauty, elegance, logic, and symmetry is impossible for a human mind to create in the complexity that they are found in Scripture.

There can be any number of elements or ideas. But that they repeat in reverse order around a central point is the key characteristic. 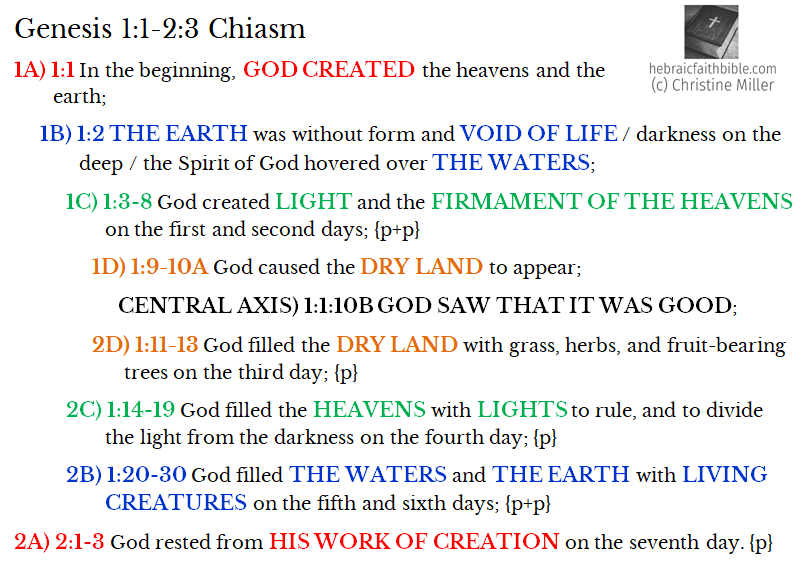 Notice that the Hebrew paragraph divisions help define the elements of the structure. You can see that besides the central point – that God’s creation was good, not one full of predation and death – the repeating elements then make matching pairs, which bring even more clarity to the text. In this case, the structure reveals that God first formed the universe, which was void, saw that its form was good, then filled the universe that He had prepared with life. 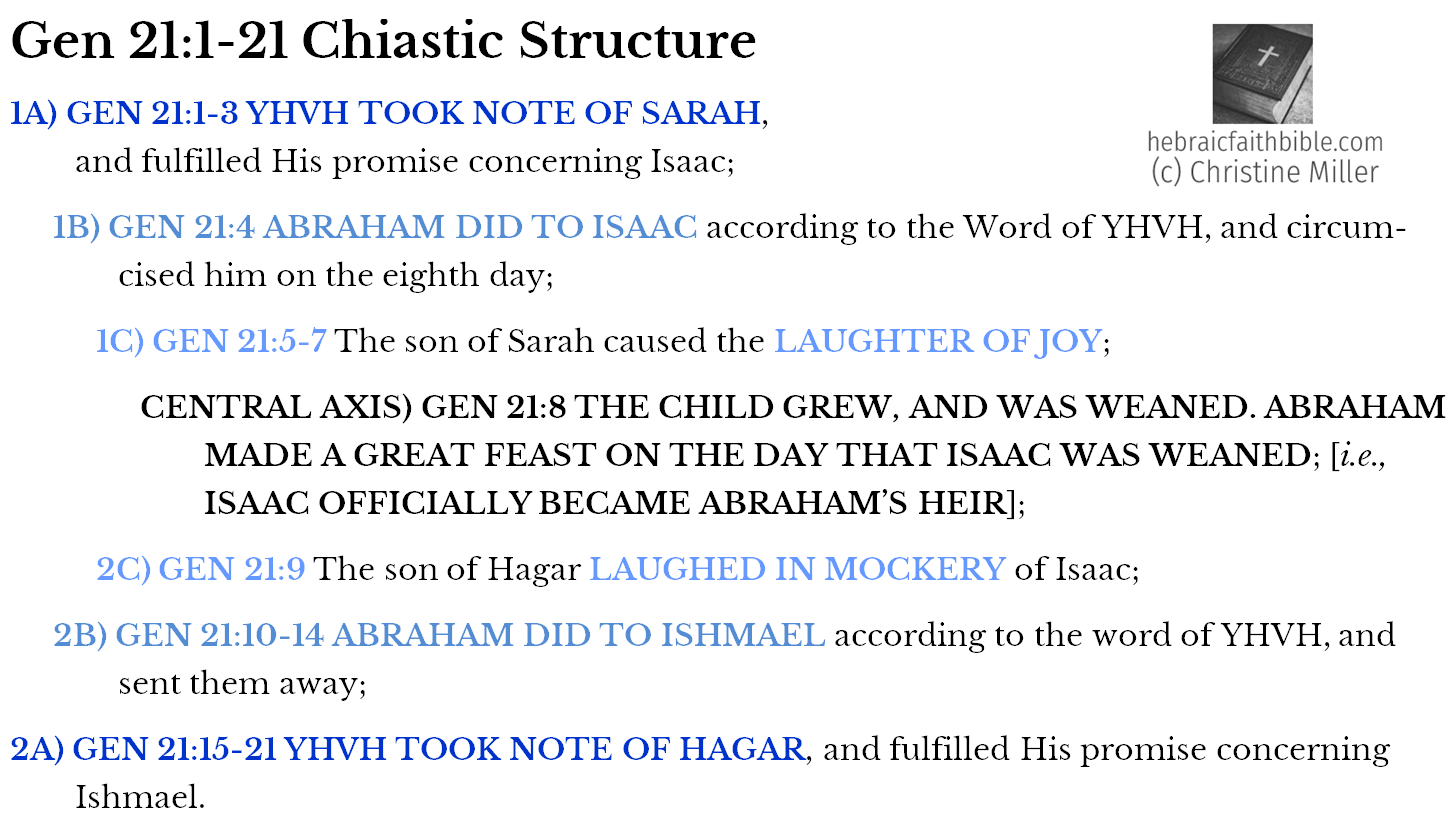 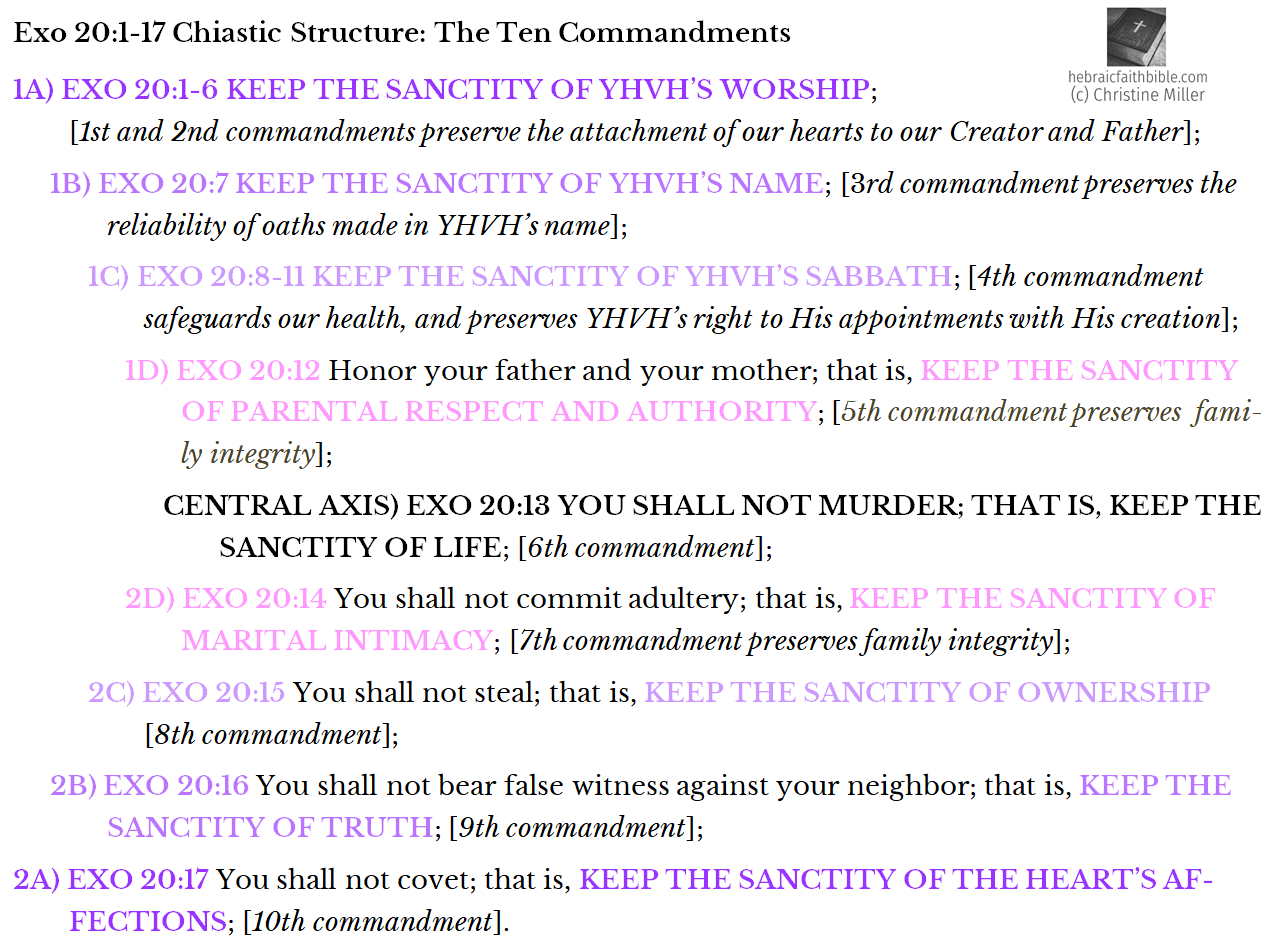 While at first glance it might not be evident how the matching elements pair, if we meditate on it a little bit, it becomes clear. And this invitation to dwell on the Scripture’s meaning, is one of the very great benefits of the chiastic structure teaching tool.

The A pair reveals that guarding the affections of our hearts is key to preserving the sanctity of YHVH’s worship, worshiping Him alone, and having no idols before Him. The B pair reveals that when we take an oath in the name of YHVH, keeping that oath preserves the sanctity of truth. We have done, or remained true, to what we said we would do. The C pair reveals that rest prevents us from stealing away our health. It also reveals that when we preserve the appointments YHVH has made with His creation, we have not stolen the Creator’s right or ownership of those appointments, and of His creation. The D pair commandments preserve the integrity of the family, and reveals that it is an act of obedience to YHVH’s authority to both honor parents and spouse as YHVH commands. The central axis reveals the absolute sanctity of life, and that ultimately, all the commandments have as their core motivation guarding both our spiritual and physical life, liberty, and pursuit of happiness, and that of our neighbors.

There are complete structures that are one paragraph long, even one sentence long, and others which were five, ten, or twenty chapters long, with smaller structures embedded within them. There are elegant and complex structures overlapping other completely different elegant and complex structures, meaning that they share portions of a narrative for their elements, without once disturbing the flow of the narrative, or the symmetry of the greater and lesser structures around them. There are single structures that encompass an entire book of the Bible, from beginning to end. I believe the Old Testament makes a single structure, as well as the New, as well as the entire Bible from Gen 1:1-Rev 22:21 (I am working on mapping it). The events of the life of Yeshua form a chiastic structure. Well, that would make sense if He is the Word of God made flesh, and the chiastic structure is a thumbprint of the Holy Spirit on the text of the Word of God.

The central point often isn’t what you might expect it to be, and sometimes, the matching pairs aren’t what you would expect them to be a first glance either. But God has a reason for making His central points and His matching pairs as He has. Often He is revealing something beautiful and amazing about Himself, about Messiah, or the Gospel of salvation by grace through faith. Sometimes He reveals prophetic pictures. At any rate, He is trying to help us understand Him.