You are here: Home / Bible Study / acts / sabbath and the first day of the week 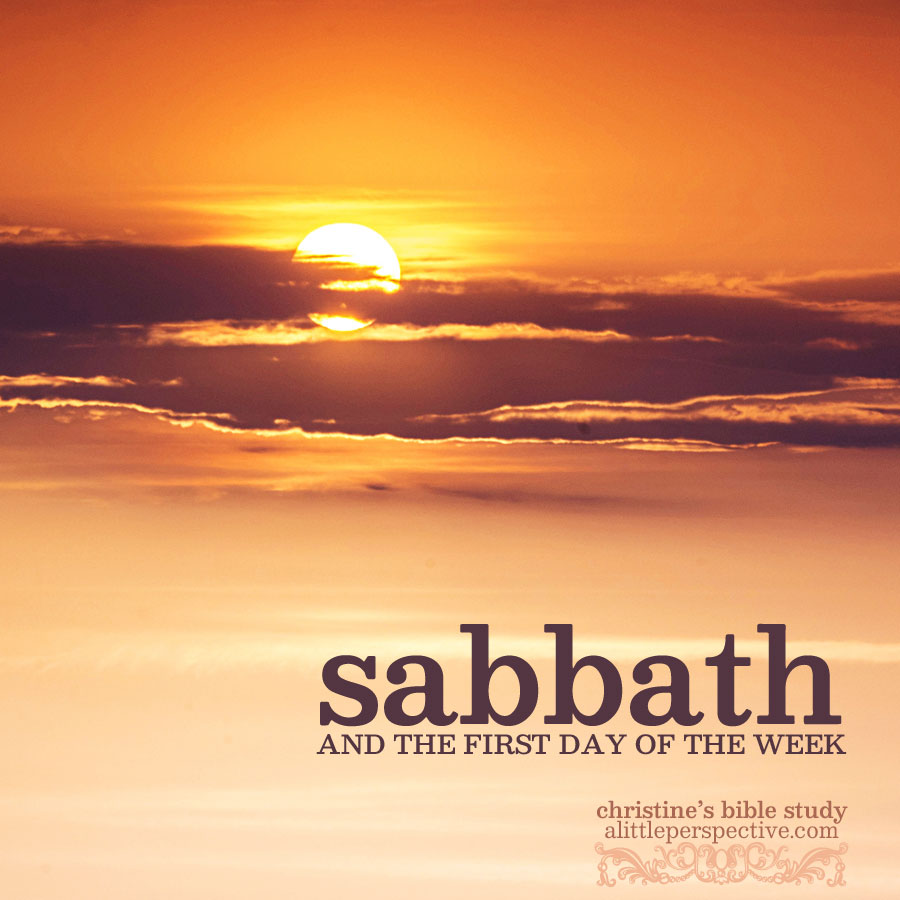 We, thinking like Romans, don’t consider it the first day of the week until we get up in the morning on Sunday, but 1st century Jews did not think like Romans. They thought like Hebrews.

The Friday evening ceremony usually consisted of a special family meal in their homes; special prayers and blessings were said, and special food was served. Sunday dinner at Grandma’s is the American equivalent in concept. Then the Jews gathered together twice on Saturdays: in the morning, in the synagogue, to hear the Torah reading, and the readings from the Psalms and the Prophets, and the teaching on the readings. The Gospels record one instance where Jesus gave the teaching on the reading from the Prophets in one synagogue meeting.

Then in the evening, as it was drawing toward sundown, the Jews gathered again, usually in homes, for a havdallah service: a special ceremony in which the Sabbath was bid goodbye. This Saturday evening meeting often consisted of a shared meal in which everyone who came brought food to contribute to the meal. The havdallah service often lasted well into the night, as it was an opportunity for fellowship which did not occur during the rest of the week.

The meeting in Acts 20:7 was most likely a havdallah service. Paul did not preach from Sunday morning until midnight (not really humanly possible, for the preacher or the listeners); but from Saturday at sundown, at the close of the Sabbath, until midnight. Either meaning for “one of the sabbaths” could apply in Acts 20:7: the meeting began on “the first of the Sabbaths” as we can see from reading the verse in its context with Acts 20:6; and it ended on “the first day of the week,” as Jews considered the dark of the night Saturday night to be the first day of the week.

We can test this theory by looking at the other instances where sabbaton is translated “week”:

Now on the first day of the week [mia ton sabbaton] Mary Magdalene went to the tomb early, while it was still dark, and saw that the stone had been taken away from the tomb. Joh 20:1

It was Mary’s desire to anoint the body of Yeshua with spices for His burial, but because He was taken down from the cross so close to sundown before a High Holy Sabbath, one of the seven annual Sabbaths (the 1st day of Unleavened Bread), it could not be done right away. The best she could do was prepare the spices, then wait for the Sabbath to be over before she anointed the body. If the 1st Day of Unleavened Bread began on a Thursday evening that year, when the Sabbath was over, the regular weekly Sabbath began, so she had to wait another day. This would explain how Jesus was in the grave for three days: Thursday through Saturday.

Now if I put myself in Mary’s shoes, and my heart was heavy with love and grief for my Lord, and I knew that His body had been put into the tomb unanointed, I would want to anoint His body as soon as possible. It could not, however, be done on either the High Holy Sabbath or during the regular weekly Sabbath, at any time in between the opening and closing ceremonies. But the very next opportunity would be as soon as the closing ceremony was over, on the dark of the night Saturday night.

(We know from Jewish tradition, and Acts 20:7, that these meetings went well into the night, Saturday night.) If it were me, I would have taken the spices with me to the havdallah service, so that I could go straight to the tomb when the service was over. And this is what I believe she did: she most likely took the spices with her to the havdallah service, so that, on her way home, the Sabbath being over, she could go to the tomb and anoint the body. Thus she could do the work the love in her heart for her Master was urging her to do as soon as possible, while not violating the Sabbath.

So it being yet dark, on the first day of the week to a Jew (sometime Saturday night to a Roman); the Sabbath being over, she went to the tomb, and found the stone already rolled away.

My personal belief is that Jesus rested in the grave during the Sabbath, and rose when the Sabbath ended. But we have no eye witnesses to the time of His actual resurrection — just the empty tomb, the angels, and the risen Messiah. We cannot place with any accuracy the time of His resurrection. My belief is that it could have been at any time following sundown Saturday to the time Mary visited the tomb, while it was still dark, before the sun rose on the next day.