You are here: Home / Bible Study / proverbs / proverbs 2, and to be cut off 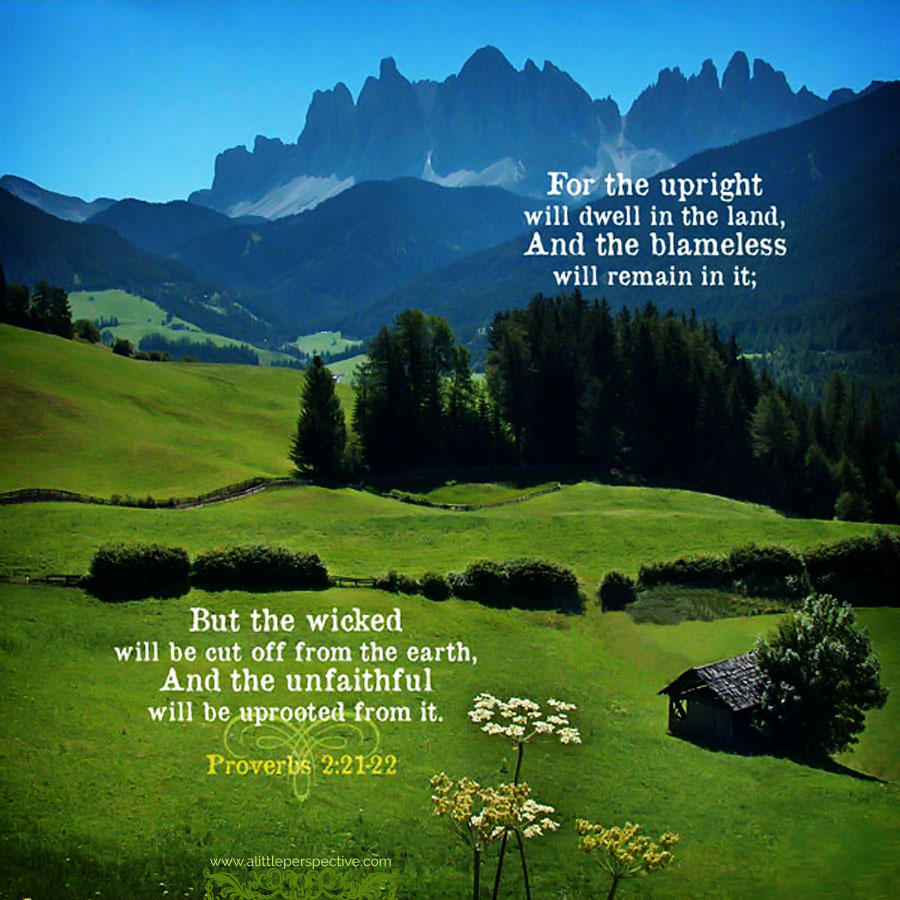 The Pro 2 Hebrew paragraph divisions and chiastic structure, is here.

For the upright will dwell in the land, and the blameless will remain in it;
But the wicked will be cut off from the earth, and the unfaithful will be uprooted from it. Pro 2:21-22

TO CUT OFF Strong’s H3772 כרת  karath, a primitive root meaning, “to cut down or off.” As per the Ancient Hebrw Lexicon, the kaph was transposed over time from an original quph.

The end (quph, in the sense of extremity, as the horizon is the extremity of our view) of that which is choice (resh, as firstfruits) serves to mark (tav) the covenant, i.e., the choicest sacrifice is used to cut the covenant. So also, to cut down, to cut off.

TO PLUCK UP Strong’s H5255 נסח  nasach, a primitive root meaning, “to pluck up or out.”

The seed (nun) producing thorns (sin) is divided (chet) from the rest, or alternatively, removed beyond the wall separating the homestead from the wild.

“The rapture” as is taught by modern teachers, is a false teaching.

As I understand it, “the rapture” is supposed to be an event where believers are PLUCKED OUT OF the earth, for a period of time before Yeshua’s return, leaving only unbelievers on the earth. “He who now restrains … is taken out of the way.”

Texts used as proof are all in the letters to the Thessalonians:

For the Lord Himself will descend from heaven with a shout, with the voice of an archangel, and with the trumpet of God. And the dead in Christ will rise first. Then we who are alive and remain shall be caught up together with them in the clouds to meet the Lord in the air. And thus we shall always be with the Lord.  1 The 4:16-17.

Now, brethren, concerning the coming of our Lord Jesus Christ and our gathering together to Him, we ask you,  not to be soon shaken in mind or troubled, either by spirit or by word or by letter, as if from us, as though the day of Christ had come. Let no one deceive you by any means; for that Day will not come unless the falling away comes first, and the man of sin is revealed, the son of perdition,  who opposes and exalts himself above all that is called God or that is worshiped, so that he sits as God in the temple of God, showing himself that he is God. Do you not remember that when I was still with you I told you these things? And now you know what is restraining, that he may be revealed in his own time. For the mystery of lawlessness is already at work; only He who now restrains will do so until He is taken out of the way. And then the lawless one will be revealed, whom the Lord will consume with the breath of His mouth and destroy with the brightness of His coming. 2 The 2:1-8

(The capitalized “He”s in 2 The are assumptions on the part of the translators. They must assume that the restrainer is God. But Paul does not identify the restrainer, and only mentions that he revealed to them who the restrainer was when he was with them and told them in person.)

Yes, we who are alive at His coming will be gathered to Him in the air as He is on His way down. The gathering is mentioned a second time in 2 The 2:1. But it is like a common practice from the ancient world, when a king visited one of his cities. The citizens, upon hearing of his coming, went out of the city to meet him on the way, showing him honor, and escorted him into the city. In other words, once they met the king, they immediately turned around.

So instead of believers leaving the earth to the wicked, the Scripture teaches that it is the wicked who will be PLUCKED UP OUT of the earth.

“Blessed are the meek, for they shall inherit the earth.” Mat 5:5

Another parable He put forth to them, saying: “The kingdom of heaven is like a man who sowed good seed in his field;  but while men slept, his enemy came and sowed tares among the wheat and went his way.  But when the grain had sprouted and produced a crop, then the tares also appeared. So the servants of the owner came and said to him, ‘Sir, did you not sow good seed in your field? How then does it have tares?’ He said to them, ‘An enemy has done this.’ The servants said to him, ‘Do you want us then to go and gather them up?’ But he said, ‘No, lest while you gather up the tares you also uproot the wheat with them. Let both grow together until the harvest, and at the time of harvest I will say to the reapers, “First gather together the tares and bind them in bundles to burn them, but gather the wheat into my barn.” ’ ” Mat 13:24-30

The tares are PLUCKED UP OUT at the time of the harvest, and burned, while the wheat is preserved.

Wheat yields seed heads, which are then ground for flour; i.e., it produces fruit.

… the bearded darnel, mentioned only in Matthew 13:25-30. It is the Lolium temulentum, a species of rye-grass, the seeds of which are a strong soporific poison. It bears the closest resemblance to wheat till the ear appears, and only then the difference is discovered. It grows plentifully in Syria and Palestine.

Whereas wheat produces a heavy seed head full of seed, the tare, which looks so like wheat that it is known as “false wheat,” produces no seed head. The difference between them is in their fruit.

“And as it was in the days of Noah, so it will be also in the days of the Son of Man:  They ate, they drank, they married wives, they were given in marriage, until the day that Noah entered the ark, and the flood came and DESTROYED them all. Likewise as it was also in the days of Lot: They ate, they drank, they bought, they sold, they planted, they built; but on the day that Lot went out of Sodom it rained fire and brimstone from heaven and destroyed them all. Even so will it be in the day when the Son of Man is revealed. In that day, he who is on the housetop, and his goods are in the house, let him not come down to take them away. And likewise the one who is in the field, let him not turn back. Remember Lot’s wife. Whoever seeks to save his life will lose it, and whoever loses his life will preserve it.” Luk 17:26-33

“Men” and “women” were inserted in the text and are not in the Greek. Not even this is evidence of a rapture: we have to assume that the believer is taken, and the wicked left, which is more than Yeshua said. In concordance with the rest of Scripture, I believe it is the wicked who are taken away, and the righteous who are left.