You are here: Home / Homeschooling / educational philosophy / on the use of real books in the secondary curriculum 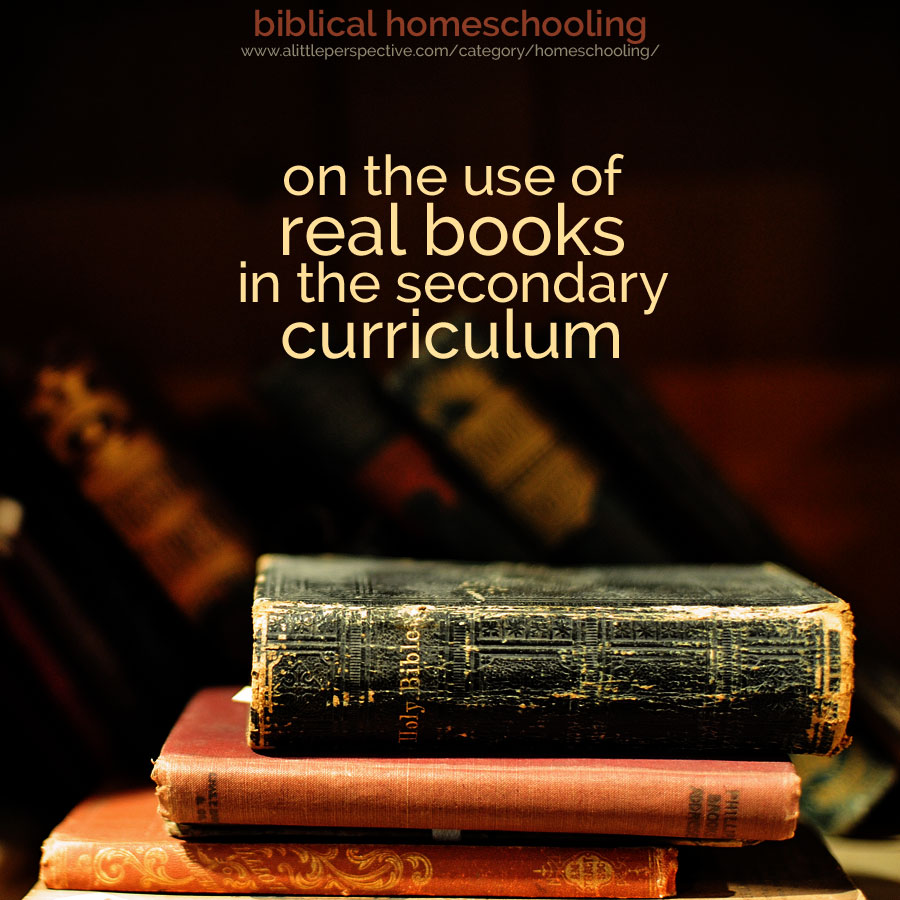 Most of the books recommended by CCH for use in the dialectic and rhetoric stages (the secondary curriculum) are “real” books. They are not history texts, or science texts, or economics texts. They are real books, about history or science or philosophy or economics. Text books tell you what the main points of a subject are; in essence, they tell you what to think about that subject. Real books require you to do your own thinking, which is why they provide a superior education and training in thinking. But of course, that is also harder. It is easy to get something tangible out of text books, but how do you get something tangible out of real books?*

For example, in the dialectic and rhetoric stages, we are faced with a list of “great books” to read, like Aristotle’s Rhetoric, Cicero’s Orations, Augustine’s Confessions, or Madison, Hamilton, and Jay’s The Federalist Papers. They intimidate homeschool parents. But we can read these works successfully with our children in our homeschools. I know because we do it every day, with the greatest great book, the Bible. The Bible is a real book. It is not someone’s text book telling us what the Bible means and what its main points are. We believe we can read it for ourselves, and our children can read it for themselves, and get something out of it. If we can do that with the greatest great book, we can do it with lessor great books, and even other books that we might use that are helpful, but not “great.” What follows is the plan we use in our homeschool to get the most out of real books in our curriculum.

Dialectic stage children can do the following work with parental help and prompting. It works well for parent and child to write the book notes together, especially in the beginning. Rhetoric stage children do much of this work on their own, with occasional parental help. Over the course of the six years, children will need less and less help as they get the hang of reading and evaluating real books.

Begin with keeping a notebook, such as a spiral notebook, for each subject under study. Your notes and thoughts and outlines of the real books you read will be recorded in the notebook. Reserve the first page for a list of the books studied for that subject, adding to it as you progress in that study. Make each entry like an entry for a bibliography, and save a space for the date that the book is completed. This first page, in essence, becomes the “table of contents” for your individualized secondary studies in that subject. It is of great help later when compiling report cards, transcripts, or documentation records for college entrance.

To get the most out of each book, read it through twice. The first time through, read the book quickly, even skimming it. This should take no more than a week for even the thickest book, and many times will only take a few days. If it takes longer than that, you are reading too intently for the first time through. The goal should be just to get the gist of what the author is saying, the big picture. You don’t want all the details yet, but just a general idea of where the book is headed–it will help later when the details might otherwise bog you down. During the first reading, record the book’s table of contents in the notebook, leaving a little space to write in each chapter’s main idea later. Be sure to read the author’s preface or introduction, if there is one, in this first reading. Good authors don’t want to be misunderstood, and many times they will tell you what message they hope to communicate by the book’s end. What the author thinks he is saying is of prime importance! Make a note of it in the notebook.

When you have finished that chapter’s initial reading, go back to your notes. Your goal is to understand the author’s message, so it is important to “get” whatever it was that was unclear initially. Look up vocabulary in the dictionary, and write definitions down in the notebook. Re-read the unclear paragraphs and think about them until they begin to make sense. Some convoluted sentence structures may actually have to be diagrammed in order to figure out the meaning. Remember that the main point of the sentence is contained in the subject-verb-object-indirect object, and all the prepositional phrases are window dressing. With older books especially, it may help to actually divide really long sentences into several shorter ones. Do all this work in the notebook. Make a point to record the author’s statements that you agree or disagree with. These points of contention and agreement make great starting places for high school papers.

Once you understand that chapter’s message, outline the chapter. Look for the main idea of the chapter, and record it. Under the main idea, record the points the author makes to support his main idea, along with any sub-points used to support a point. Once the chapter has been outlined, finish the notes on that chapter with a one sentence thesis statement for that chapter. Remember during the quick first reading of the book, you recorded the book’s table of contents with some space left under each chapter heading? Record the chapter thesis statement there. Now you can go on to the second chapter, and so through the book.

Once you know what the author was trying to say, you can determine what you think about his message. It helps to discuss the author’s main ideas with someone, or write to someone about the book. Usually it is when discussing and writing about ideas that they begin to crystallize in our own minds. Was the author’s message true? Was it partly true and partly erroneous? Why or why not? It is not enough to just agree or disagree with the author based on some vague feeling. Prove that his message is either true or not true. Realize that our ideas about whether his message was true or not may change over time, especially if we are just beginning a study of a subject. We may want to adjust our thinking as we become more learned in the topic. This is perfectly fine.

An Example of Chapter Notes

Now for a real-life example. One of the books in Uncle Eric’s How the World Works series (for rhetoric stage applied history) is Are You Liberal? Conservative? or Confused? by Richard Maybury. Our notebook notes for one chapter of this book looks like this (the initial notes are in black type, jotted down during the initial reading; the clarification of those initial notes are in colored type; the outline was written during the second reading of the chapter):

Are You Liberal? Conservative? or Confused? by Richard Maybury

Chapter 5: The Nature of Political Power

Look up Lord Acton’s quote, “Power corrupts.” Was he speaking of political power only? The context appears to indicate that he was.

Define “power.” The ability to act or produce an effect; legal or official authority, capacity, or right; possession of control, authority or influence over others; one having such power, specifically, a sovereign state. -Webster’s

Define “influence.” The power or capacity to cause an effect in indirect or intangible ways; sway. -Webster’s

“What is government, and what sets it apart from all other human institutions?” –answer to this question possible chapter thesis statement.

Political power: the privilege of using brute force to back up [government] decisions, unique among human institutions.

Influence: implies choice, individuals can choose to walk away.

Governments are the only institutions that are designed to encroach, in violation of one of the two great laws: Do all you have agreed to do, and do not encroach on other persons or their property.

America’s founders believed government inherently evil because of this. ? Think about this–Biblical basis for this statement?

*“Both conservatives and liberals–left and right–want this privilege [the right to use political power]. They disagree only in the specific applications.”*

Political power is the essence of governments.

a. Governments have the privilege of using brute force to back its decisions.

1. Uses force or the threat of force (military and police) to induce obedience.
2. Exercised in taxation, military conscription, participation in the Social Security system, drug use and gun ownership laws, etc.

b. Brute force is political power.

1. Other human institutions are not able to use brute force to make you buy what they are selling.
2. Businesses, charities, service organizations, churches etc. may use influence, but not brute force.

Political power violates one of the two great moral, or common, laws.

a. Violates “Do not encroach on other persons or their property.”

b. The use of brute force is always encroachment. (see Whatever Happened to Justice by Richard Maybury for proofs.)

Chapter Thesis Statement: Political power, uniquely exercised by governments among human institutions, is inherently evil because it uses brute force to back up its decisions, thereby violating one of the two great laws: do not encroach. 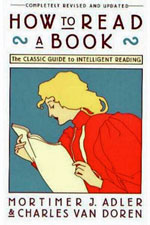 *Much of the material from this article is a condensation, along with some of my own practical ideas, of the art of reading described in How to Read a Book by Dr. Mortimer Adler. This book is really essential for homeschoolers using real books in the secondary curriculum. Dr. Adler discusses analytical reading, note-taking, and evaluating the author’s message in detail, and also includes chapters on adjusting your reading and evaluating for epic poetry, plays, philosophy, history, etc.–different kinds of real books. We recommend it without reservation.