You are here: Home / Family / work in progress / On the godliness of contentment 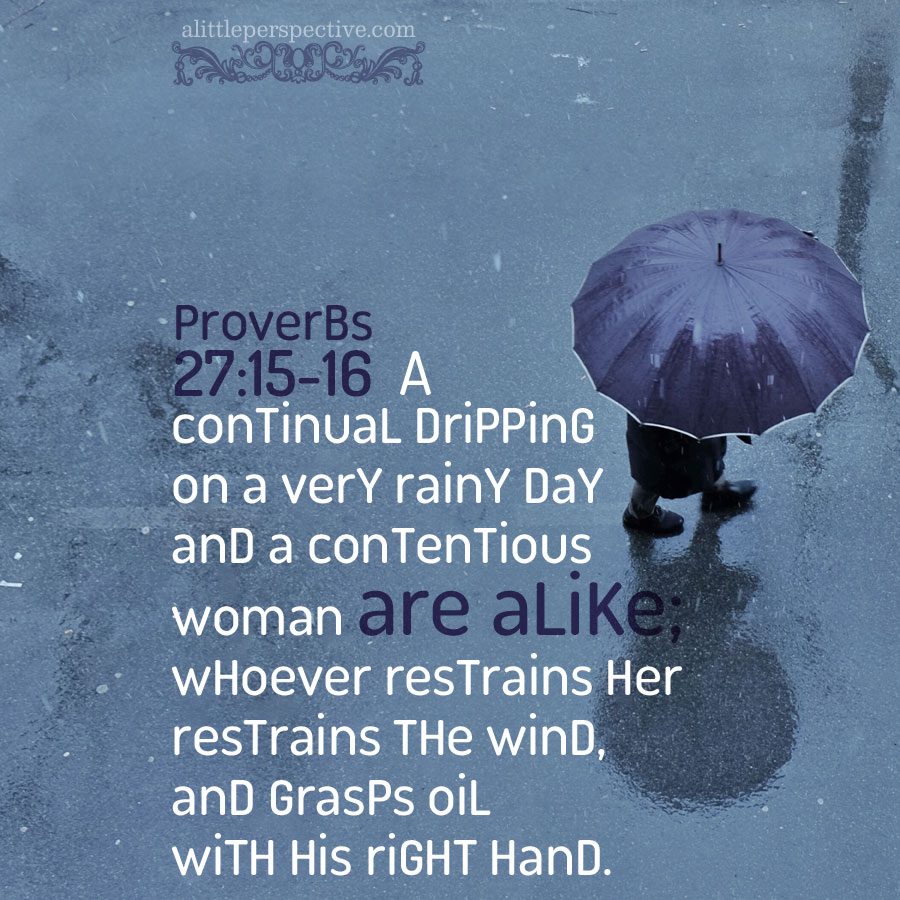 In our Tuesday Bible study last week, we were semi- joking about how many admonitions there were in Proverbs about the contentious wife.

Contentious means, “likely to cause contention, exhibiting an often perverse and wearisome tendency to quarrels and disputes; having an aggressive or fighting atittude.” And contention means, “the argument, or tension, that results from a contest, struggle, or rivalry,” (Webster’s). Note that contention shares a root with contentment: “satisfaction with one’s possessions, status, or situation.” I think contention and contentment are spiritual opposites — the contented wife is satisfied, while the contentious wife always has complaints.

The contrast reminded me of the children of Israel coming out of Egypt. They arrived at the Promised Land, and sent out the twelve spies, ten of which discouraged them from entering the Land — really, from having trust in God or obeying Him — while two encouraged them to enter the Land. The Lord said to Moses after this that Israel had tempted (tested) Him ten times, and had not hearkened to His voice. According to Jewish tradition, the ten times the Lord is speaking of are Ex 14:11, Ex 15:24, Ex 16:3, Ex 16:20, Ex 16:27, Ex 17:2, Ex 32:4, Num 11:1, Num 11:4, and Numbers 14, the incident of the twelve spies. The common denominator to most of these incidents which tempted the Lord, in which Israel did not listen to the Lord’s voice, was Israel’s complaints. Complaints … they were not satisfied with their leaders, water, food, Land — even with their God, in the instance of the golden calf. They coveted, really, what they did not have. Covetousness means “always desiring more; not satisfied; avaricious.”

The Lord said of them that their contentions were a rejection of Him. We can see that: Moses was a hand- picked leader for them, deliverance from slavery, manna, sweet water, the Promised Land — all gifts from the Father’s hand. We can despise the children of Israel, but are we so different? When we have complaints about our husband, children, home, or life, aren’t we really contending with the Lord, the gift- giver? “This husband of mine, Lord, never does this or never does that …” the Lord who hears that complaint also hears the cry of the woman whose husband abuses her. “My house is too small …” the Lord who hears that complaint also hears the prayers of the Chinese Christians in prison, and the Sudanese Christians enslaved by Muslims, who have no house at all.

And He said to them, “Take heed and beware of covetousness, for one’s life does not consist in the abundance of the things he possesses.” Luke 12:15

Now there is great gain in godliness with contentment, for we brought nothing into the world, and we cannot take anything out of the world. 1 Tim 6:6-7

Let your conduct be without covetousness; be content with such things as you have. For He Himself has said, “I will never leave you nor forsake you.” Heb 13:5

« God does bless everyone — no exceptions
Ancient history questions »