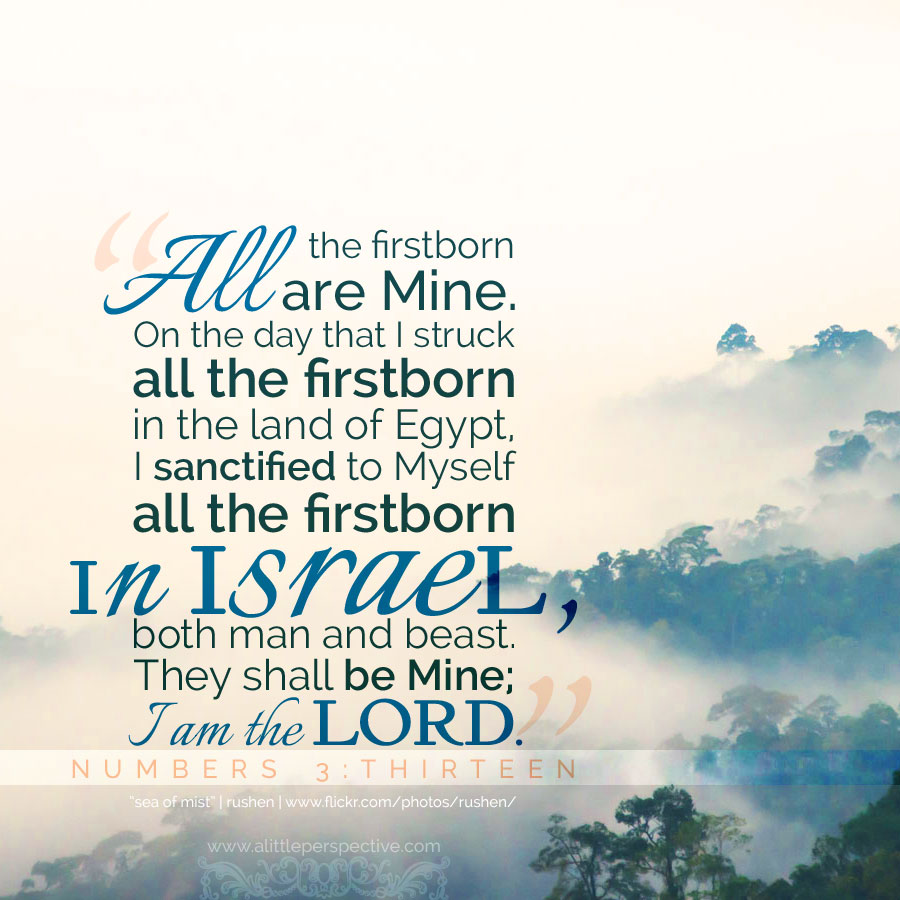 Read Numbers 3 and 4 at Bible Gateway.

The strong themes from the beginning of Numbers:

We have previously seen in Torah, that the firstborn son of the family received the blessing and the birthright, and he would act as mediator and priest for his family and his family’s clan when the father passed away. Abraham, Isaac, and Jacob all built altars and offered sacrifices and called on the name of the LORD. When Israel first came out of Egypt, it was still this way.

And Moses wrote all the words of the LORD. And he rose early in the morning, and built an altar at the foot of the mountain, and twelve pillars, according to the twelve tribes of Israel. Then he sent young men of the children of Israel, who offered burnt offerings and sacrificed peace offerings of oxen to the LORD. Exo 24:4-5

So when did everything change? At the golden calf. The children of Israel made for themselves a golden calf, and sacrificed to it, and worshiped it.

Now when Moses saw that the people were unrestrained (for Aaron had not restrained them, to their shame among their enemies), then Moses stood in the entrance of the camp, and said, “Whoever is on the LORD’s side– come to me!” And all the sons of Levi gathered themselves together to him. Exo 32:25-26

The sons of Levi were the ones who came at the call, “Who is on the LORD’s side?” The sons of Levi slew three thousand idolaters that day, and sanctified themselves as on the LORD’s side from that day forward. So now, in Num 3, God is formally declaring that the Levites will serve Him in all things regarding Aaron and the tabernacle, instead of the firstborn sons of the children of Israel.

I have always wondered why Aaron remained in his office, or even remained alive, even though the Scripture seems to say that he was the one who made the golden calf, especially when his sons seemed to transgress in something less heinous, and died before the LORD because of it. The above Scripture seems to say that Aaron did not restrain the people, not that he led them or condoned what they were doing. At that stage of his ministry and growth (he had not yet been consecrated in his priesthood) he may have felt coerced, and did not feel he had the authority of Moses to restrain the people. It just goes to show that we humans are completely inadequate at judging the thoughts and intentions of people’s hearts, and how important it is for us to leave questions of who will be saved in the LORD’s capable hands. Some things are too high for us!