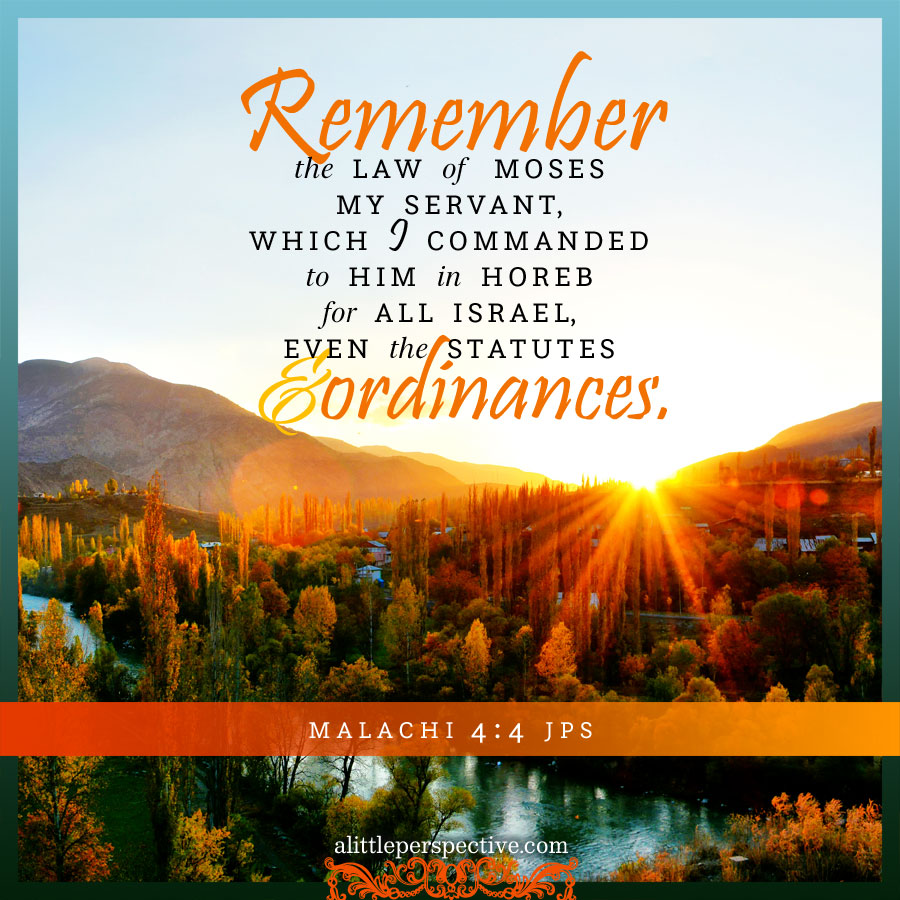 Read Malachi 3 and 4 at Bible Gateway.

These chapters are the final prophecy of the Old Testament, the final word of the LORD before 400 years of silence, only to be broken by the coming of Elijah (who is John the Baptist, who came in the spirit and ministry of Elijah, Mat 11:10, 13-14) and the Lord Jesus Christ. John the Baptist is the messenger of the covenant, and the Lord Jesus Christ is the Lord who will suddenly come to His temple (Mal 3:1). This was fulfilled at the first coming of Messiah Yeshua.

The very next verses prophesy of the day of His coming, who can endure it? He will be like a refiner’s fire, He will draw near for judgment. The language is repeated in Mal 4, when the Day of the LORD will come burning like an oven to burn up all the proud and the wicked like stubble. This didn’t happen at the first coming of Messiah Yeshua — it will happen at His second coming.

Behold, I will send you Elijah the prophet
Before the coming of the great and dreadful day of the LORD. Mal 4:5

We just saw that Elijah the prophet was John the Baptist, who preceded the first coming of the Lord Jesus Christ. John preached repentance! And Elijah also precedes the second coming, which coincides with the great and dreadful day (Mat 17:1-13, note vs. 11, “Indeed, Elijah is coming first and will restore all things,”). I believe Elijah, the prophet who walked in the power of the Holy Spirit, symbolizes the Holy Spirit, who convicts the world of sin and of righteousness … so that all who hear Him, may repent and be baptized before the great and dreadful day of the LORD as John called for repentance.

This prophesy in Malachi concerns the coming of the Lord Jesus, in both His first and second comings. Before His first coming, the LORD admonished His people not to go away from His ordinances but to keep them. His charge against His people in this whole book has been points of neglect of His ordinances after all: sacrifices, and tithes, divorce (adultery), and honor of the LORD’s things.

In fact, the LORD equates returning to the keeping of His ordinances, with returning to Him, so that He can return to them (Mal 3:7).

His final admonition to His people preceding Yeshua’s second coming, is to remember the Law of Moses with its statutes and judgments (Mal 4:4) — similar to His admonition before Yeshua’s first coming. We are waiting for Him, we are waiting for a great deliverance when He appears: in the meantime, keep His charge, His Torah, His commandments, His statutes, His ordinances, and His judgments. The Torah defines righteousness and wickedness for mankind!

God’s definitions of righteousness and wickedness, or sin, have not changed because Jesus has died on the cross so that we could be forgiven our violations of Torah. That forgiveness does not confer license to us to go and continue to sin, but His word to all to whom He extended mercy, was “Go, and sin no more,” (for example, Joh 8:11).

That continues to be His message, for He does not change (Mal 3:6). His mercy toward us in spite of our sins has not changed, therefore we have not been consumed like stubble from that day to this. But the Day is coming, when those who do wickedly against Him will be consumed like stubble, therefore fear the LORD, wait for Him. Until that Day, remember the Law of Moses, and walk in the Spirit!