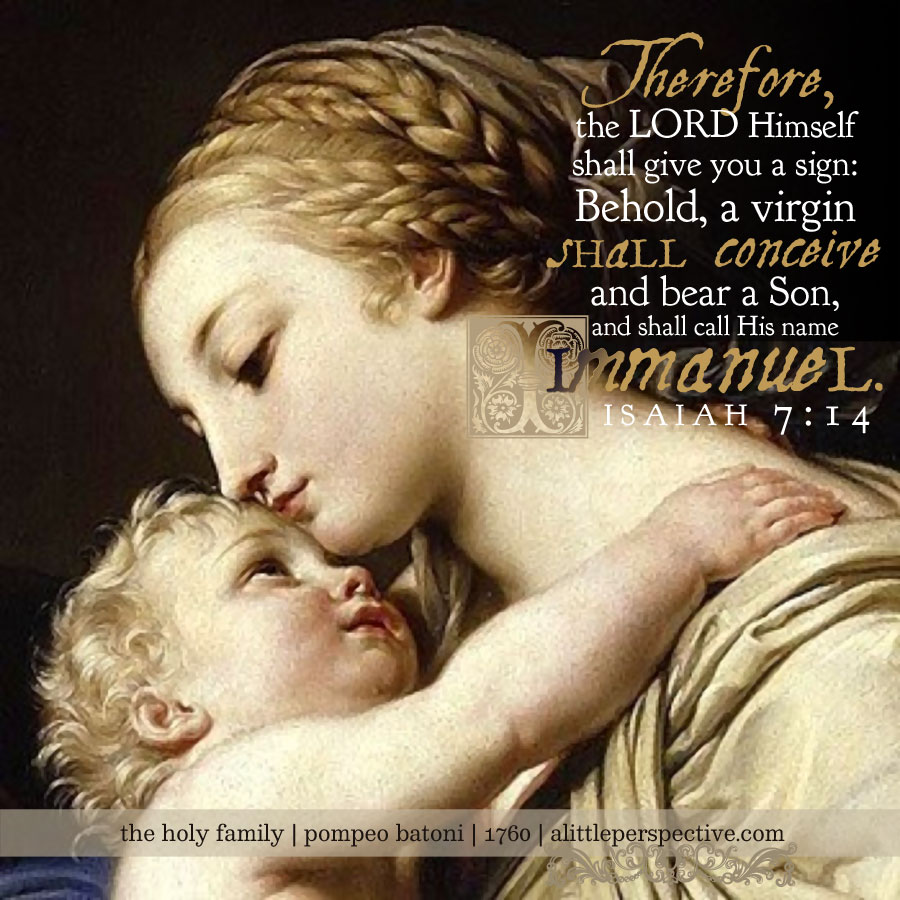 Read Isaiah 7 and 8 at Bible Gateway.

The strong themes so far:

Isa 5:8-19 {s+s+p} Woe to those who feed on the poor + embrace sin + mock at the LORD
Isa 5:20-23 {s+s+p} Woe to those who call evil good, thinking themselves wise in justifying the wicked, condemning the righteous
Isa 5:24-30 {p} Because they have rejected the Law of the Lord, His people will be taken into captivity
Isa 6:1-13 {p} Isaiah’s vision of the Lord’s glory + his call to prophesy to Israel + Judah of the judgment + remnant
Isa 7:1-6 {s+p} Syria + Israel aligned against Judah so that Ahaz feared: A Remnant Shall Return, Fear not!
Isa 7:7-9 {p} Their plan shall not stand, within 65 years Ephraim shall be broken
Isa 7:10-17 {p} The LORD’s sign: a virgin shall bear a Son, Immanuel/ the king of Assyria shall come
Isa 7:18-20 {p} In that day the LORD will whistle for Assyria, and shave Israel with him as with a hired razor
Isa 7:21-25 {s+p} In that day the remnant will eat curds and honey, the fruitful land will become briers + thorns

There is a chiastic structure encompassing Isa 6 through part of 9, all concerning the Messianic prophecies, but I have not been able to complete it. Maybe tomorrow?

A little historical background on the events of Isaiah 7:

By the reigns of Pekah the king of Israel, and Rezin the king of Syria, the generation of Assyrian kings that had repented at the preaching of Jonah had died out. During their lifetimes, as the Assyrian kings no longer went out to war, the Assyrian empire was reduced back down to her old national boundaries. (Pul “king of Assyria” was, we learned yesterday, Assyria’s Babylonian overlord, not a native Assyrian king.) But upon the death of the last of that line of kings, a usurper took his chance, and gained the throne. His name was Tiglath-Pileser, and he sought to restore Assyria to her former glory, and began again campaigns of conquest.

Israel and Syria had gotten used to their freedom from Assyrian tribute, so when Tiglath-Pileser again imposed it upon them, they resolved to shake off the Assyrian yoke. They made a league together to revolt against Assyrian authority, and sought to get Ahaz, the king of Judah, to add his strength to their own.

Ahaz refused, and this refusal so angered Pekah king of Israel, and Rezin king of Syria, that they joined together to capture Jerusalem. Their intention was to kill the son of David and put a puppet of their own creation on the throne of Judah, who would do their bidding. Their choice for puppet king was the son of Tabel, whoever that was. The LORD knew who it was and told Isaiah (Isa 7:6). This was the state of affairs when Isaiah delivered his prophecy recorded in Isaiah 7 and 8.

Ahaz and all Jerusalem had (momentarily) repented of their idolatry when Pekah and Rezin had come against Jerusalem to attack it, and the combined armies of Israel and Syria had not yet been able to overcome Jerusalem, but they were strengthening their defenses in Ephraim for a new attack. The house of David was facing its extinction; but the word of the LORD which came to Isaiah, for Ahaz, was to ask the LORD for a sign to prove that he was not to fear either Israel or Syria. When Ahaz would not ask for a sign, the sign that the LORD Himself gave him was:

“Therefore the Lord Himself will give you a sign: Behold, the virgin shall conceive and bear a Son, and shall call His name Immanuel.” Isa 7:14

In other words, the house of David will not cease, but He will be born to David, whom the Law and Prophets testified would come: Messiah, whose name is God with us. For God will be with Him, and through Him, God will again be with Judah, with Israel, and with all mankind. The breach will be repaired!

However, in the mean time, the king of Assyria will indeed come upon Israel and Syria, and their kings deposed, and their people taken captive, so that only a remnant will be left. The captivity of Israel by Assyria was completed in 721 BC.