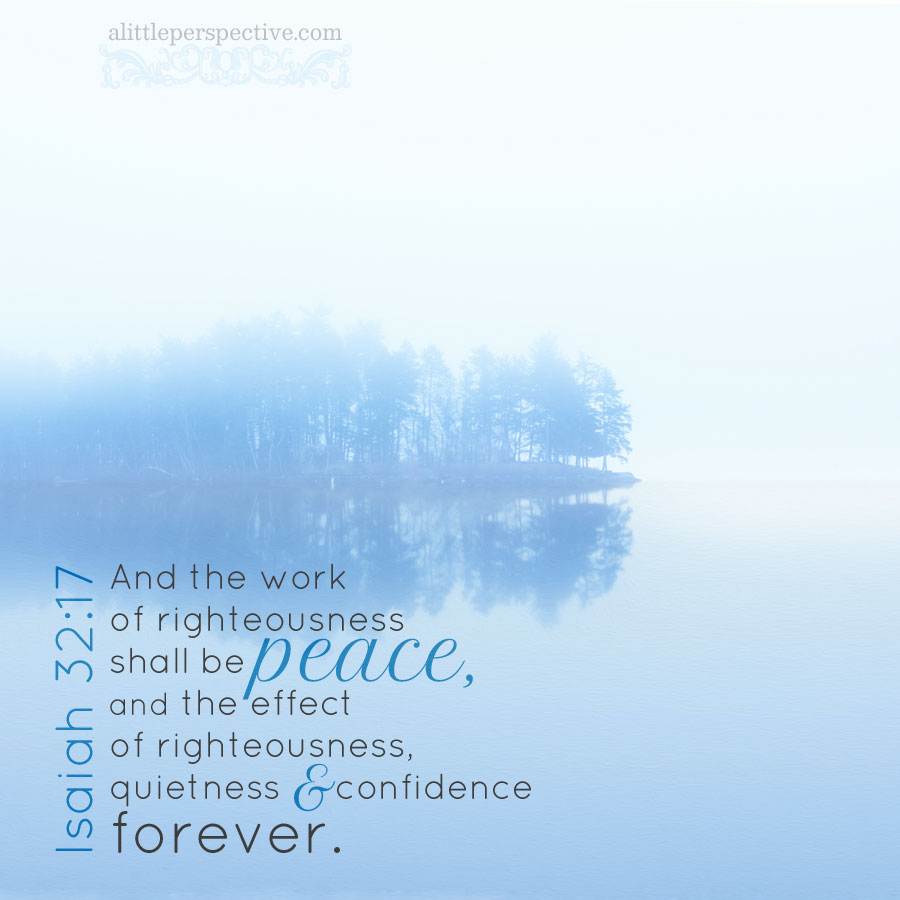 Isa 32:1-8 {s} The reign of the righteous King/ righteousness and evil clearly seen and known
Isa 32:9-20 {s} Complacency will cease + fruitful land desolate until the Spirit is poured out + righteousness reigns
Isa 33:1 {s} Woe to the plunderers + treacherous, for they will be plundered + dealt with treacherously
Isa 33:2-6 {p} YHVH be gracious + He shall gather the plunder + He shall be exalted in justice + righteousness
Isa 33:7-9 {s} The valiant + ambassador + traveler ceases for the land mourns + languishes
Isa 33:10-12 {p} Now will YHVH arise and be exalted/ the peoples shall be burned in the fire
Isa 33:13-24 {s} The sinner shall be in terror, not the righteous, for the righteous King shall reign in beauty + majesty

1a) Isa 32:1-4 The reign of the righteous King/ righteousness + clarity, truth, wisdom the norm;

1a) Isa 32:9-11, Troubled are the complacent women; they will mourn, for the harvest of the land will fail;
1b) Isa 32:12-14, They shall morn for the fruitful field, for it be will thorns + briers/ the city deserted;
central axis) Isa 32:15a, Until the Spirit is poured upon us from on high;
2b) Isa 32:15-19, The wilderness shall become a fruitful field, where dwells righteousness/ the meek city;

1d) Isa 33:1 {s} Woe to the plunderers + treacherous, for they will be plundered + dealt with treacherously;

central axis) Isa 33:2, “O YHVH, be gracious to us; we have waited for You. Be their arm every morning, our salvation also in the time of trouble;”

2d) Isa 33:3-4, When He lifts Himself up, the nations will be scattered/ He shall gather His plunder;

My sense of the somewhat confusing 1c pair, is that the Holy Land – the Land being spoken of here, not the whole earth – which was once fruitful, a land flowing with milk and honey, will become a desolate wilderness, producing thorns and briers, because its springs dried up, and its population deserted. The population of the north was deserted, for all intents and purposes, when the Assyrians took the northern kingdom captive, something that happened during the lifetime of Isaiah. The southern kingdom is also going to be taken captive, which does not happen in Isaiah’s lifetime, but some 135 years later. Only a remnant of them will return, but they will be scattered again in 70 and 135 AD by the Romans. For most of the Christian era, the past 2000 years, the population of the Holy Land was sparse; and the land was a desolate wilderness, producing thorns and briers.

Now we are given event markers to know when things are going to change.

1) The Spirit will be poured out upon us from on high. This took place in Acts 2, but after the final dispersal of the population in 135 AD, the working of the Spirit was pretty quiet, through the Dark and Middle Ages, even through the Reformation and into the modern era (although He never truly went away from the day He was poured out until this, and if you look, you can find evidence of Him …). So much so that newly Protestant believers created doctrines in their denominations explaining that the working of the Spirit was only for the generation of the apostles. However, this passage in Isaiah and others, such as the famous one in Joe 2, connect the outpouring of the Spirit on all flesh with the time of the second coming of Messiah Yeshua to rule and reign. And this is why the generation of the apostles thought the Lord would return in their lifetime.

But in this century, the Spirit again has been poured out widely, and the gifts of the Spirit again operated with power, beginning, roughly, in 1906 with the Azuza Street Revival and continuing through our generation. Especially if you travel among the Church in the third world, you will hear reports of miraculous healing, even the dead being raised, as a commonplace occurrence. Now this is an event marker to show us that the return of the Lord Jesus to reign in beauty and majesty is near.

2) The Holy Land will once again become a fruitful field, and this has been occurring since the return of the Jews – the southern kingdom – to the land in this century, paralleling the return of the Spirit to the Church in this century. In fact my pastor believes that what happens to Israel in the natural and what happens to the assembly of the believers in the spiritual, are tied together and mirror each other prophetically. The return of the fruitful field is tied to the return of springs of water and broad rivers, and the Spirit is often portrayed prophetically as water (and also fire, see Joh 7:38, Mat 3:11). And is it a coincidence that the effect the Spirit produces in the life, is called the ‘fruit’ of the Spirit? No – fruitfulness, both physical and spiritual, will increase.

The first effect of the modern outpouring of the Spirit, as a harbinger of the coming of Messiah, was miraculous gifts. But the second, and related effect, is the increase of righteousness, for the work of the Spirit is to convict men concerning sin and righteousness (Joh 16:8). We are living in the very days where He is doing this work, as believers by increasing numbers across all denominations, are seeing that the righteous commandments and just decrees and statutes of God contained in Torah have not passed away, but still apply to us (Mat 5:17-19).

Neither the Word nor the Spirit has passed away, but they will appear with the Lord Jesus in His glorious return, as the vision of the transfiguration prophesied (Mat 17)!

What about the hail falling down on the forest, and the city being brought low (or humiliated, as some translations have it)? The contrast is being painted of the complacent city (Jerusalem) of palaces and plenty, also injustice and idolatry, before the Babylonians came against it, and the new city of the righteous King, where righteousness and justice will be the norm. The city will no longer be complacent, careless, or proud, but meek – reflecting the gentle and lowly nature of the King whose city it is (Mat 11:29-30). That is what I believe the prophecy is conveying.

As far as he who sows beside all waters: he is happy, while the complacent women are troubled. Sowing is an act of faith in a hopeful future, amen? That he freely sends out his oxen and donkeys: oxen are the beasts used to plow, and donkeys the beasts used to transport the harvest to market. The picture being painted is of generous liberality in both sowing and reaping, and making the produce available to others. It does not mean, necessarily, that he gives his produce away – but he is generous to make it available, to increase the supply to meet the demand, which keeps the price low. He doesn’t hold back his harvest in order to price gouge and increase wealth to himself at the expense of the poor. This man, who is generous and does not hoard, will be blessed in his sowing and reaping.