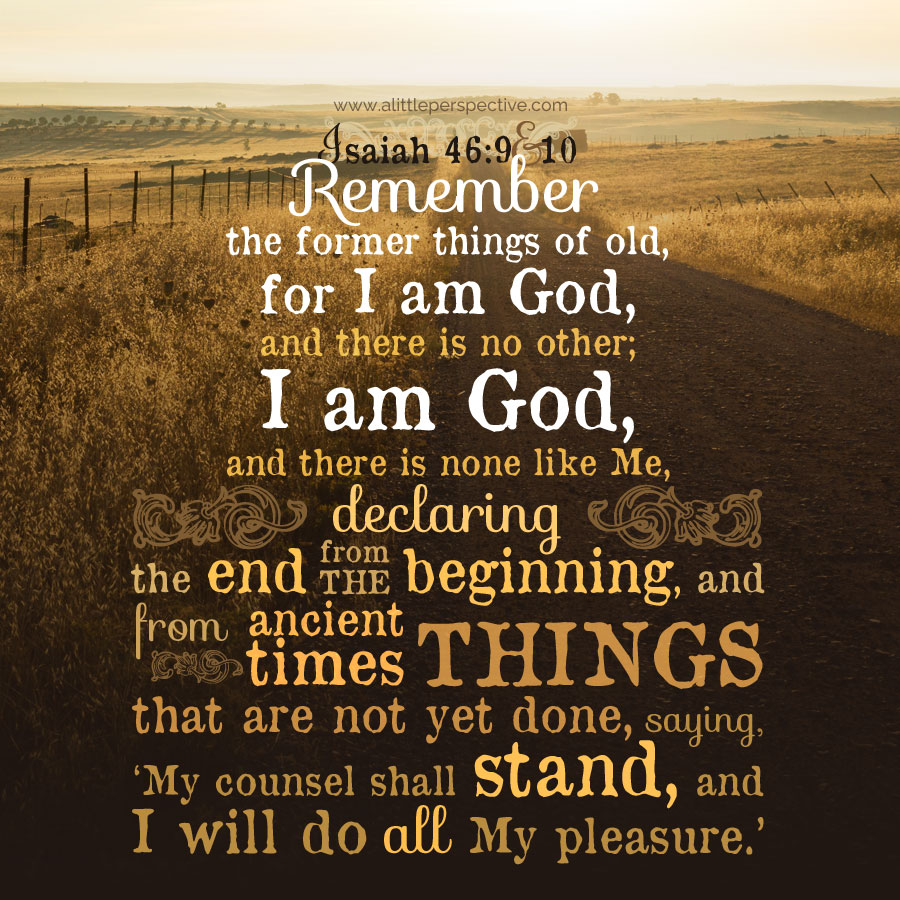 Read Isaiah 17 through 19 at Bible Gateway.

Isa 17:1-3 {p} Damascus will cease from being a city/ the fortress will cease from Ephraim
Isa 17:4-9 {s} The glory of Jacob will wane/ in that day he will look to his Maker, not to idols
Isa 17:9-11 {s} Because Jacob forgot the God who saved him, his pleasant plantings will be a heap of ruins
Isa 17:12-14 {p} The nations will roar + rush, but God will rebuke them: the lot of those who plunder Jacob
Isa 18:1-3 {s} Messengers sent to Ethiopia/ see the banner lifted on its mountains + hear the trumpet blown
Isa 18:4-6 {s} The vines + shoots cut off and taken away in the summer, before the grape ripens
Isa 18:7 {p} At that time Ethiopia will bring a present to the LORD of hosts, to Mount Zion
Isa 19:1-17 {s} YHVH will cast down the idols of Egypt/ civil war + economic ruin/ terror because of Judah
Isa 19:18 {s} In that day five cities in Egypt will speak Hebrew + worship YHVH
Isa 19:19-22 {s} In that day Egypt will cry to YHVH because of their oppressors + He will deliver them + heal them
Isa 19:23 {s} The highway from Egypt to Assyria/ Assyrians + Egyptians worship together
Isa 19:24-25 {s} Israel one of three with Egypt and Assyria, who worship YHVH

Isa 17:4-14 {s+s+p} Jacob’s glory diminished because they forgot God, but they will return + He will secure them
Isa 18:1-7 {s+s+p} Ethiopia will see the banner lifted on the mountains and will worship YHVH of hosts

In the past few days, Isaiah has not only prophesied the mercy and restoration for Israel (Isa 14:1-2), but the destruction of Babylon. Babylon was and is the metaphor for the kingdoms of this world (Isa 14:3-23), thus it was appropriate that the prophecy against Babylon should be first, as Babylon has always been the head of gold for the rest of the nations (Dan 2:38).

Damascus and Syria will be destroyed. In fact, Damascus will cease to be a city, but will become a heap of ruins (Isa 17:1). When did this happen? Damascus was founded by Uz, the firstborn son of Aram, the son of Shem, the son of Noah. Since the day Uz founded it, it has not ceased to be a city. This prophecy is still waiting for its fulfillment. And Syria has acted aggressively toward Israel and is currently in the midst of a terrible civil war. So the time of the fulfillment of this prophecy might be near at hand, in our lifetimes.

Isa 18 is interesting. It is the burden against Cush, or Ethiopia, which in ancient times covered a vast empire encompassing modern day Ethiopia, Sudan, Uganda, and central Africa to the eastern coast. Ethiopia will be pruned, but their remnant will see it when He lifts up His banner on the mountains — a reference to Messiah, who is the Banner of the LORD? — and will hear it when He blows His trumpet. After this they will bring a present to the LORD of hosts. Christianity has made great strides in this region, but Islam is waging jihad against the Christians on its borders. The prophecy seems to be saying, however, that Christ will overcome, and the worship of YHVH will be established and increase.

The Ethiopian ruling family has long claimed descent from a union between King Solomon and the Queen of Sheba. Its population is predominately Christian. The next largest religion is Islam, and the third was Judaism until the 1980s, when most Ethiopian Jews migrated to Israel and became full Israelis under the Law of Return. Today there are 120,000 Ethiopian Jews living in Israel.

Isa 19 is the burden against Egypt. Egypt will be in dread because of the LORD of hosts and because of Judah (Isa 19:16-17). Present day Israel is composed primarily of Judah (the Jews). Egypt will suffer oppression, and they will cry out to the LORD because of their oppression, and He will send them a Savior and a Deliverer, who will cause Egypt to know the LORD (Isa 19:19-22). The oppression Egypt has been suffering under is the oppression of Islam, which we have been reading about in the news. The Savior and Deliverer YHVH will send them, I believe, is Messiah Yeshua. There will be a great revival which will sweep Egypt, and I believe will deliver Egypt from the oppression of Islam and Islamic rule. This prophecy is being fulfilled in our day.

Egypt will join with Israel, along with Assyria, as a three- nation axis of peace and blessing in the Middle East (Isa 19:23-24). Ancient Assyria is today located mostly in the present day Kurdish homeland, in northern Iraq, southern Turkey, and eastern Syria. In fact, the Kurds are ethnically separate from Iraqis, Turks, and Syrians, being of Assyrian descent. The modern states of Iraq, Turkey, and Syria were created at the end of World War I, and at that time there was a proposal to create a modern Assyrian state also, which was scrapped. But as the Kurds are currently striving for independence from these three states, I believe because of Isaiah’s prophecy that they will succeed. Today, they are waging war against ISIS which has invaded Iraq, and when they have won this war against them, perhaps that is the time they will become a separate nation again. In this nation, there will be a great revival as in Egypt. That there will be a highway between Egypt and Assyria says to me that Iraq will necessarily be subdued, and Arabia at least at peace with them, so that travel will flow freely between the two. They will ally themselves with Egypt and Israel, and the Israel-Egypt-Assyria triangle will be a blessing to the Middle East.

These events have not happened yet but are poised to happen. ISIS will not prevail in the Middle East, but the LORD God. When you see them unfold in the headlines, know that it is the LORD God who has told the end from the beginning, through His servant the prophet Isaiah, for His word will surely come to pass.