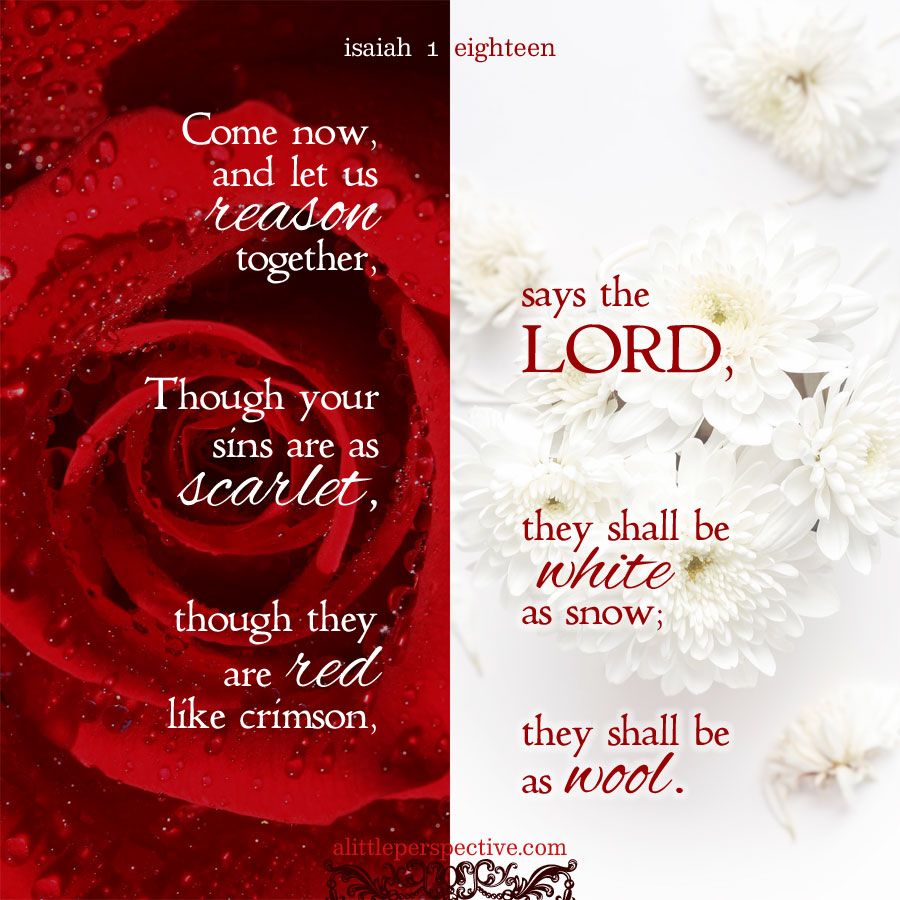 Read Isaiah 1 and 2 at Bible Gateway.

Isa 1:1-9 {p} The rebellious children of Judah who did not learn from discipline
Isa 1:10-17 {s} The Lord abhors futile sacrifices for sin when it is not accompanied by turning away from evil
Isa 1:18-20 {p} Scarlet sins washed white/ obedience = prosperity, rebellion = devoured by the sword
Isa 1:21-23 {s} Once righteous Jerusalem a harlot/ once righteous princes rebellious + unjust
Isa 1:24-31 {p} The Lord will rid Himself of His enemies: purge the dross by fire
Isa 2:1-4 {p} All nations shall flow to the house of the LORD to learn Torah when Messiah returns to rule
Isa 2:5-11 {p} Jacob, walk in the LORD’s light, for the LORD forsook Jacob, but He will humble the pride of man
Isa 2:12-22 {p} The day of the LORD will humble everything proud/ the idols He shall abolish

Isa 1:1-9 {p} The rebellious children of Judah who did not learn from discipline
Isa 1:10-20 {s+p} Futile sacrifices for sin/ The LORD will wash sins, afterward those who obey will prosper
Isa 1:21-31 {s+p} The LORD will restore the righteousness of Jerusalem + her princes, by purging dross by fire

The chiastic structure for chapter 2 (the day of the LORD):

1a) Isa 2:6-7, You have forsaken Your people because they are filled with eastern ways;

central axis) Isa 2:12-16, For the day of the Lord shall come upon everything proud + lofty to bring it low;

2c) Isa 2:17, The loftiness + haughtiness of man brought low/ the Lord alone exalted in that day;

2b) Isa 2:18-21, He shall abolish their idols/ they shall cast them in the earth from the terror + glory of the Lord;

2a) Isa 2:22 {p} Cease yourselves from man, whose breath is in his nostrils; for of what account is he?

The A pair is interesting. The LORD had forsaken His people because they are filled with eastern ways, literally: they are filled to the full, satisfied, with that which is from the east. What does that mean? I think it might mean, that since the tower of Babel rebellion, the world was in agreement with one philosophy, the philosophy from Babel. They served idols which their hands had made, with soothsaying, just as had been introduced by Nimrod at Babel. But everything changed when God called Abram out of Ur of the Chaldaeans (which name means, moon worshipers), to separate himself from his father’s house and go the land which the LORD would show him. Abram went west to the Holy Land from Ur. Ur and Babel were left behind in the east, and with Abram, came the Hebraic or Biblical worldview, which was a dramatic shift, diametrically opposed to the worldview of the east which he had left behind. Abram is the father of all who believe – who believe that God is, that He exists as Creator and Ruler of the universe, and who believe Him, that His words are true, and act accordingly.

But his descendants in the Holy Land, in Judah and Jerusalem, had forsaken the LORD and were full, were satisfied, not remorseful or troubled, with a return to those eastern ways that Abram had left behind.

So then in the 2A pair, the LORD admonishes His people to cease themselves from man. The way of Babel, after all, is the way of man; it is the way of the world and that which seems right to a man, but whose end is the way of death. The inverse is implied: embrace the way of Yehovah, walk in His paths, and be satisfied with His definitions of good and righteousness, evil and sin.

Even though the first part of Isaiah is strong with prophecies of destruction, the destruction is upon those who forsake the LORD and His ways, on those who exalt themselves proudly against the LORD. The day of the LORD is not against those who have humbled themselves before YHVH and walk in His ways!

But please note Isa 1:10-15, which describes those who adhere to the forms of godliness by relying upon sacrifices for sin, and partaking in new moons and feast days, and yet who ignore righteousness and justice: they are not exempt! Who is Jesus but our sacrifice for sin? When we ignore the commandments of God, and persist in those things which the LORD has condemned, saying that because we have our sacrifice for sin, anything we do is now lawful for us, how are we different from the children of Judah the LORD is warning through Isaiah? But rather, He says:

“If you are willing and obedient, You shall eat the good of the land; But if you refuse and rebel, You shall be devoured by the sword”; For the mouth of the Lord has spoken. Isa 1:19-20

The words of the Lord Jesus testify to the very same thing:

“Not everyone who says to Me, ‘Lord, Lord,’ shall enter the kingdom of heaven, but he who does the will of My Father in heaven. 22 Many will say to Me in that day, ‘Lord, Lord, have we not prophesied in Your name, cast out demons in Your name, and done many wonders in Your name?’ 23 And then I will declare to them, ‘I never knew you; depart from Me, you who practice lawlessness!’ Mat 7:21-23

And what is lawlessness, but Torah- lessness? The good news is, the LORD is shaking and waking His people up, and the Spirit is loudly proclaiming this message of repentance to all corners, for all of those who are His, who have ears to hear!

isaiah 1-2, on rebellious children and their cure