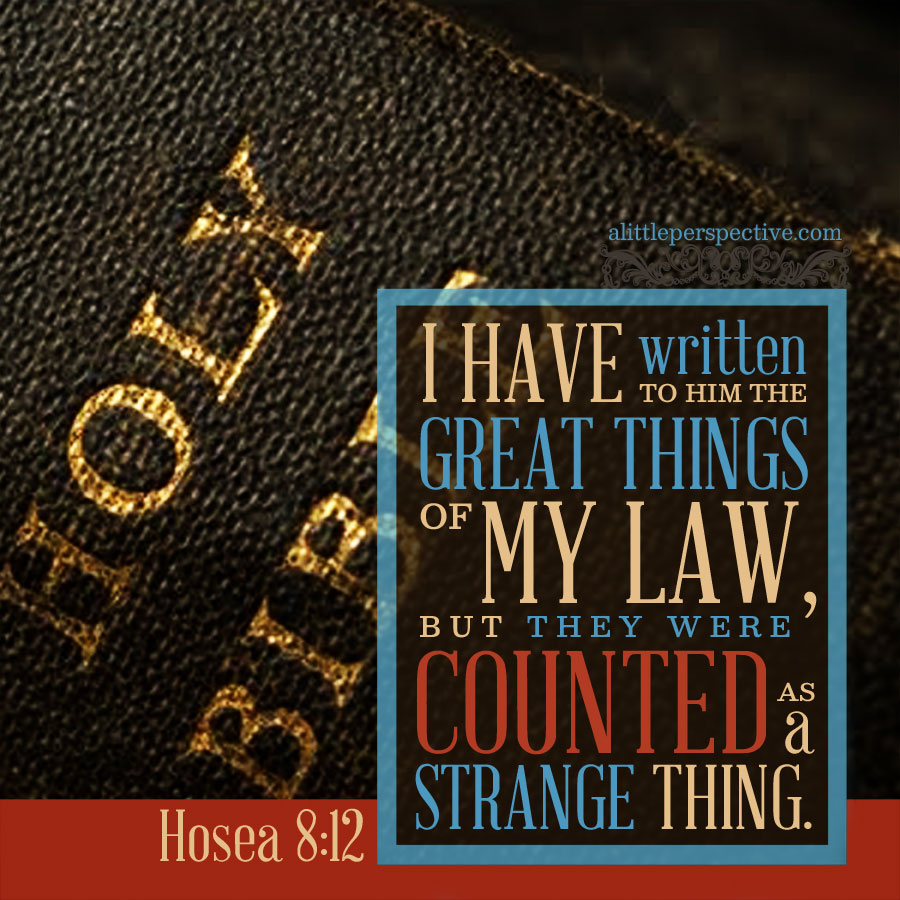 Read Hosea 7 and 8 at Bible Gateway.

Hos 5:8-6:11 {p} Ephraim + Judah’s sickness, wound/ YHVH’s solution: new life in Messiah Yeshua
Hos 7:1-12 {s} Ephraim’s wickedness/ mixed among the peoples, not seeking YHVH, but He will recover them
Hos 7:13-8:14 {p} He gave Israel Himself + His Law but they rejected both Him and it; therefore He will remember their iniquity

Come, and let us return to the LORD;
For He has torn, but He will heal us;
He has stricken, but He will bind us up.
After two days He will revive us;
On the third day He will raise us up,
That we may live in His sight.
Let us know,
Let us pursue the knowledge of the LORD.
His going forth is established as the morning;
He will come to us like the rain,
Like the latter and former rain to the earth. Hos 6:1-3

We have read previously in Hosea a list of Ephraim’s sins, one of which was that there was no knowledge of God throughout the whole land, because all Ephraim had forgotten the torah of God. If we continue on reading in Hosea 6, the litany against Ephraim continues. God asks:

The sin and unfaithfulness of Ephraim and Judah, that is the LORD’s problem.  But at the heart of the narrative of sinfulness and unfaithfulness, lies the prophecy of Messiah Yeshua in Hos 6:1-3. Messiah Yeshua was raised up on the third day, that He might live in YHVH’s sight, after He had been torn and stricken. The prophecy reads as if it was Ephraim and Judah that was torn and stricken (Hos 5:14). This is one of the witnesses that revealed to Paul that believers are crucified with Messiah, and buried with Messiah, and raised up with Messiah. This is the new birth, by which we receive a new heart that compels us to return to the LORD, by which the LORD answers His question, of what He will do to purge the wickedness and unfaithfulness out of Ephraim and Judah.

The result of that new birth, is that Ephraim and Judah will pursue and know the knowledge of the LORD, which as we saw, begins with the torah of God as its foundation.

“Ephraim has mixed himself among the peoples …” Hos 7:8

The book of Hosea is the book of prophecy concerning both houses of Israel, Ephraim and Judah, but primarily focusing on Ephraim and his incurable sickness – the sin nature. The prophecy tells what will happen to Ephraim as a result. They will be taken captive and removed from their land, but that is not the end of the ten northern tribes, even though to this day they have not returned. Ephraim chose to mix himself with the ways of the Gentiles around him, and God gave him his wish – he was taken captive by Assyria, and dispersed from there to the four corners of the earth. This is all in fulfillment of Jacob’s prophecy over Joseph’s son Ephraim:

“Multitude of nations” in Hebrew is “melo hagoyim,” a fullness of Gentiles. Ephraim forgot God, and was dispersed among the Gentiles until he became a fullness of Gentiles, but God did not forget him. It has been primarily the Gentiles that have come to faith in Messiah Yeshua in the past 2000 years, to be healed of their incurable sickness and be raised to new life in Him. Perhaps a great percentage of them had been Ephraim, in their generations from long ago, whom their fathers nor their fathers’ fathers had remembered – but whom God remembered. And now at the right time, God is waking up Ephraim/ Gentiles/ Christians to know that they are Israel too, along with their brother Judah (Jews).

The ‘He’ that will come to Ephraim and Judah, is YHVH, in Messiah Yeshua. He will come in two seasons, or two comings, in the season of the former rain, and in the season of the latter rain. In Israel, the former rain comes in the spring, to water the fields that have been sown; and the latter rain comes in the fall so that the fruit is finished for harvest. The summers are dry.

The LORD’s feast days come in two seasons, in the spring, and in the fall. The LORD’s feast days prophesy of Messiah Yeshua. In the spring, the time of the former rain, He was crucified on the feast day of Passover, and so became our Passover Lamb; He was raised from the dead on the feast day of First Fruits, and so became the firstfruits of those who will be raised from dead as He was. The spring feast days, the former rain, all correspond to events He accomplished and fulfilled in His first coming.

This is why most scholars who have pursued the knowledge of the LORD in torah, believe that just as the latter rains correspond to the fall feast days, the events of His second coming will be connected with and/ or fulfilled upon the fall feast days.

Redeemed Israel by Batya Wootten, a thorough scriptural investigation of Hosea and all the prophecies concerning Ephraim and Judah in Scripture – a life- changing book!