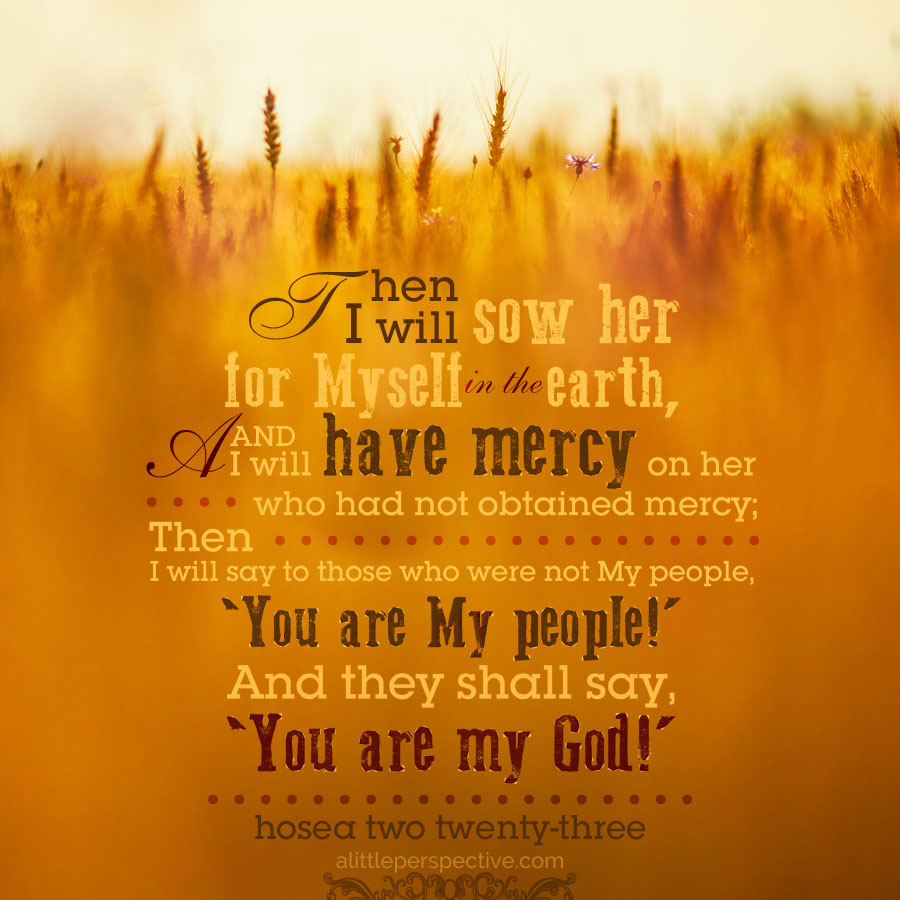 Read Hosea 1 and 2 at Bible Gateway.

Hosea was a prophet to the northern kingdom of Israel before they were carried away captive by Assyria, but as he prophesied from the reigns of Uzziah through Hezekiah, kings of Judah, he might have seen their captivity with his own eyes at the end of his ministry.

God is using Hosea’s relationship with his wife Gomer, as a prophetic object lesson for the relationship between Himself and the children of Israel. Just as Gomer was Hosea’s wife, who had been a harlot, Israel was YHVH’s wife, whom He betrothed to Himself by the covenant of Sinai (the commandments, Deu 4:13), but Israel was unfaithful to Him because of her idolatry.

The names of Hosea’s children are significant.

1a.1) Hos 1:4-5 And YHVH said to him, Call his name Jezreel [God sows]; for yet a little while, and I will visit the blood of Jezreel upon the house of Jehu, and will cause to cease the kingdom of the house of Israel. And it shall come to pass at that day, that I will break the bow of Israel in the valley of Jezreel;

1a) Hos 1:6a And she conceived again, and bore a daughter;
1b) Hos 1:6b And He said to him, Call her name Lo-ruhamah [not pitied];
1c) Hos 1:6c For I will no more have compassion on the house of Israel, that I should in any way pardon them;
2c) Hos 1:7 But I will have compassion on the house of Judah, and will save them by YHVH their God, and will not save them by bow, nor by sword, nor by battle, nor by horses, nor by horsemen;
2b) Hos 1:8a Now when she had weaned Lo-ruhamah;
2a) Hos 1:8b She conceived, and bore a son;

central axis) Hos 1:10 Yet the number of the children of Israel shall be as the sand of the sea, which cannot be measured or numbered; and it shall come to pass that, instead of that which was said to them, ‘You are not My people,’ it shall be said to them: ‘You are sons of the living God;’

Strong’s H3157, “God sows.” It is true that Israel was defeated (“the bow of Israel broken”), so that she was then taken captive by Assyria, in the Valley of Jezreel, the same valley where Jehu slew the house of Ahab. But note that Jezreel means, “God sows.” In the 2a.1 pair, the matching pair to the naming of Hosea’s son Jezreel, the children of the house of Judah, and the children of the house of Israel are gathered together under one head (which the later prophecy of Ezekiel echoes in Eze 37:21-22). Then they shall be brought up out of the land, for great is the day of Jezreel. What does that mean? Well, what does a seed do when it is sown? It springs up out of the land. This is a reference to Israel’s abundant growth in the day of Jezreel, because God has sown them.

Strong’s H3819, “not having obtained mercy,” “not pitied;” for God will no longer extend mercy after mercy for Israel’s sin of idolatry. He had been forgiving them and forgiving them for hundreds of years, and unlike Judah, Israel never experienced a national repentance from the first day of the reign of Jeroboam I, to now. Everyone whom the LORD sent to lead the national repentance (Jehu, for example) turned away and did the same sins. But, Hosea goes on to tell, He will yet have mercy on Judah, for He will save them by the LORD, and not by bows or horses – not by military might. And that is just what happened when He saved Judah and Jerusalem from the hand of Sennacherib. Yet even for all of Israel’s sins, His word to Israel is, “Mercy is shown to you;” the same name, ruhamah, without the negative prefix. In other words, when the punishment for her sin is completed and her captivity is ended, He will again show mercy to her.

Strong’s H3818, “not My people;” for Israel is no longer God’s people, and He is no longer their God, because of their repeated violations of the covenant, in which God said,

The repeated covenant- breaking of Israel has finally caused God to say to them, the deal is off, you are not My people and I am not your God. But then He immediately turns around and says, ‘Say to your brothers, “My people.” In fact, Hos 1:10 is repeated in the New Testament:

What if God, wanting to show His wrath and to make His power known, endured with much longsuffering the vessels of wrath prepared for destruction, and that He might make known the riches of His glory on the vessels of mercy, which He had prepared beforehand for glory, even us whom He called, not of the Jews only, but also of the Gentiles? As He says also in Hosea: “I will call them My people, who were not My people, And her beloved, who was not beloved.” “And it shall come to pass in the place where it was said to them, ‘You are not My people,’ There they shall be called sons of the living God.” Rom 9:22-26

For when the house of Israel is regathered from the far corners of the earth, they will seem to themselves and others, I am sure, as Gentiles, having assimilated into the Gentile culture for so many centuries. But God will sovereignly open their eyes to that fact that they are Israel. And this is what is happening with so many of us in our day.

This is the third witness that the end of Israel’s punishment will be restoration: to the land, to mercy, and as the people of God.

Now the text repeats the theme of the names of Hosea’s children in the Hos 2:21-23 {p} paragraph:

What is going on with the answering heaven and earth? Three times in Torah, Moses called heaven and earth to witness against Israel, that they would be unfaithful to the LORD God (Deu 4:26, Deu 30:19, Deu 31:28). By the time of Hosea’s prophecy, it was clear that Israel had been unfaithful to the LORD God. So in this indictment and reading of the sentence, that God is doing through Hosea to Israel, He had said that the kingdom of Israel will end and be taken away captive in the Valley of Jezreel, but their judgment is not the end. The LORD will answer the heavens: this means that the heavens are proclaiming their witness, their testimony against Israel, and God Himself will answer them. Then when He answers the heavens, thus informing their witness, the heavens, then, will answer the earth, which has been proclaiming its witness and its testimony against Israel.

How did the Land of Israel change when Israel was taken captive? The land that was once lush and green, flowing with milk and honey, became a barren desert (as we saw Isaiah prophesy). The heavens withheld their rain – that was their witness – and the earth, then, in answer to heaven, withheld its fruit – that was its witness. But now the LORD God will change that. He will speak to the heavens, and answer their witness, and the heavens will speak to the earth and answer its witness. The result will be, the earth will answer with grain, new wine, and oil. The heavens speak to the earth with rain, and the earth answers back with fruitfulness.

Then God will sow (“Jezreel”) Israel Himself in the earth. What does that mean? Their very captivity was the means God used to sow Israel to the ends of the earth.  When the heavens “rain” on the seed God plants, the earth (sown with the seed of Israel) will respond with “fruitfulness.” Speaking in prophetic symbolism, the rain of heaven is the Spirit, and the fruitfulness of the seed of Israel, is the fruit of the Spirit – love, joy, peace, patience, faithfulness – hello, instead of unfaithfulness. God is talking about sowing Israel like seed all over the earth, then given them all heart transplants by the Spirit (Ezekiel again) and watching His fruit increase all over the earth. For He will have mercy on Israel, and He will say to those who were not His people, “You are My people!” and they will say: “You are My God!”

Interestingly enough, the house of Israel which was sown to the four corners of the earth, is alternately called Ephraim in the Prophets, because Ephraim was the principle tribe of the ten tribes of the northern kingdom. Today the common name for Israel scattered in the earth, who lost their identity as Israel and became as Gentiles, but who is in our generation waking up to their identity, is B’ney Yosef – the sons of Joseph. And what does Joseph mean from the Hebrew? Fruitfulness!

I am indebted to Batya Wootten’s wonderful book, Who is Israel? Past, Present, and Future, (later reissued as Redeemed Israel) for opening up the book of Hosea to me and the meaning of its prophecy.