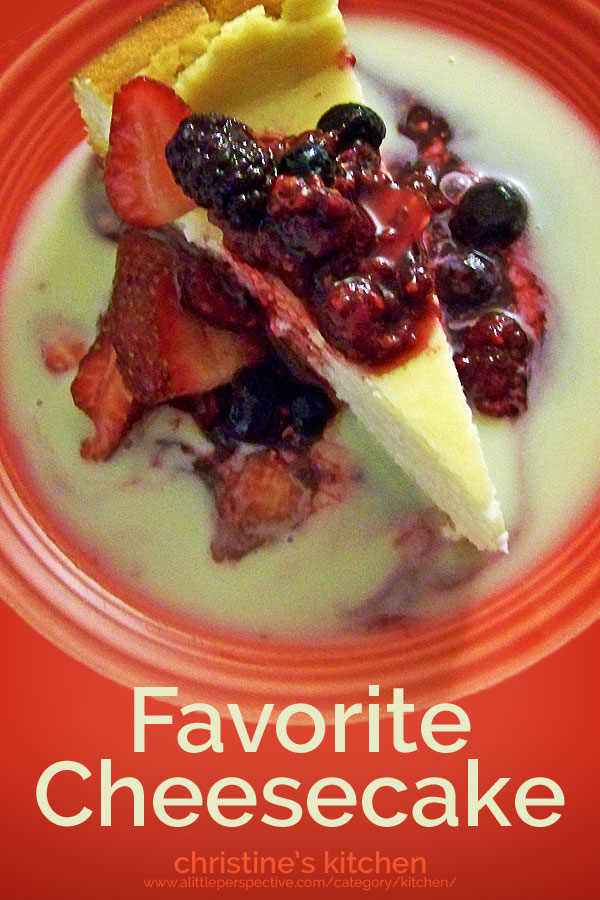 Prepare crust in 10″ springform pan. After crust is done, raise oven temp to 450. Adjust oven racks, if necessary, so that they divide the oven into equal thirds. Place a pan of boiling water on the lower rack, reserving the top rack for the cheesecake (this step will prevent the cheesecake from cracking during cooling.)

Beat cream cheese until fluffy. Gradually add sugar, beating well. Add flour, salt, lemon peel and vanilla, beating well. Beat in eggs and yolks, one at a time. Beat in whipping cream. Pour filling over prepared crust and bake 12 minutes at 450, then reduce oven temp to 300 and continue to bake for 55 minutes. The center should be very slightly loose. Remove from oven, cool to room temperature, then chill. Serve with berry or cherry glaze, if desired. After it is cool, the cheesecake can be well wrapped and frozen. Thaw in the refrigerator four hours before serving. This was Grandma Miller’s best cheesecake recipe.

1 graham cracker or cookie crumb crust for 10″ cheesecake, or

Combine flour or almond meal and sugar, cut in cold butter until mixture resembles coarse crumbs. Stir in egg yolk and vanilla. Press half the crust evenly into the bottom of buttered 10″ springform pan and bake at 400 for 8 minutes. Cool. When cool, press the other half of the crust evenly around the sides of the springform pan (the sides will not be baked before pouring cheesecake into the pan). Or, if using a cookie crumb crust, prepare according to recipe directions and cool.

Gluten restrictions: use gluten-free graham crackers or almond meal in the crust, and all purpose gluten-free flour in the filling.

Make crust and filling as directed. Omit lemon peel and scrap the insides of 1 vanilla bean pod into the batter, along with the vanilla extract. Bake as directed. While the cheesecake is cooling, whip 16 oz of sour cream with 1 T powdered sugar to stiff peaks. Spread over the cold cheesecake.

If your husband does not like white chocolate cheesecake, you can still get a similar effect by making white chocolate sauce to pour over plain cheesecake with fresh raspberries. Heat 1/3 c whipping cream to the boiling point, pour over 4 oz chopped white chocolate. Let sit five minutes then whisk till smooth and chill.