You are here: Home / Bible Study / feasts of the Lord / hanukkah history 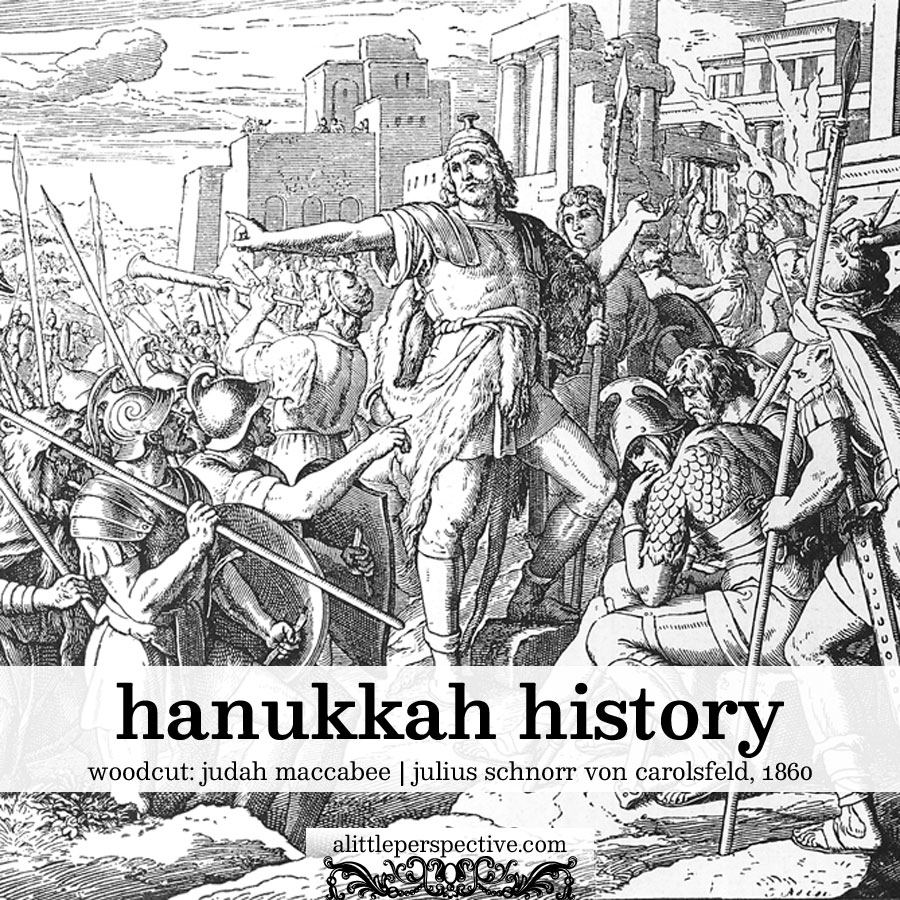 For the full history of the Feast of Dedication and the events which led up to it, read 1 and 2 Maccabees, a valuable historical account contained in the Apocrypha.

Here is the history taken from Maccabees in brief:

After Alexander the Great conquered the Persian Empire, his generals rose up after him and divided up the land, setting themselves up as kings. In the course of time, the Greek king Antiochus Epiphanes ruled over Judea. Now some of the Jews had desired to live like the Greeks, even so much a Greek gymnasium had been built in Jerusalem, and surgeries were being performed in Jerusalem to remove the evidence of circumcision on the males, so that they could not be distinguished from the Greeks in the gymnasium and at the baths. Of course, this was akin to denying that YHVH was God, and so a sharp division arose in society between those who went after the world, and those who stayed true to the worship of the God of Abraham, Isaac, and Jacob, in all that Moses commanded them.

Now Antiochus Epiphanes, when he entered Jerusalem by deceit and seized the Temple, establishing Greek tyranny over Jerusalem, he stripped the Temple of its gold and silver, forbade the worship of God, and moreover defiled the Temple by sacrificing a pig on the altar, and setting up an image to his gods, the abomination of desolation foretold by Daniel the prophet.

Once the Greeks had taken Jerusalem, they sent envoys from the king to the cities and villages round about, requiring that the leading citizens of each town sacrifice a pig to the Greek gods, showing that they renounced YHVH. And out of fear, some of the towns did so. But when the envoy came to a certain town, in which the leading citizen was Mathaias, a Levite of the house of Aaron the high priest, he refused to offer sacrifice. Another man came forward in his place, to perform the sacrifice, but Mathaias slew him in righteous indignation, and the king’s envoy also. Then Mathaias and his five sons ran for the hills, where many of the devout in Israel came to them, and over the course of three years, the family of the Maccabees (as Mathaias and his sons became known) and their army waged a guerrilla war on the Greeks, eventually defeating them and driving them from Judea all together.

When the Maccabees retook Jerusalem, and the Temple in order to purify it, it was discovered that there was only enough holy oil for burning the lights of the menorah to last for one day; but the Torah requires an eight day purification process for the making of the holy oil which kept the menorah lamps lit. Regardless, they lit the oil they had, and miraculously, so it is said, it burned for eight full days while more oil was being prepared.

“The miracle of the one-day supply of oil miraculously lasting eight days is first described in the Talmud, committed to writing about 600 years after the events described in the books of Maccabees.” – Hanukkah, Wikipedia.

When the Temple was purified, they celebrated the Feast of Tabernacles, which they had been prevented from doing in its appointed time because of the Greeks, in the 9th month beginning on the 25th day. This celebration became known as the Feast of Dedication, because it was at that time that the Temple, having been purified from all the defilement wrought upon it by the Greeks, was re-dedicated to YHVH and His worship and service restored.

“Now Judas celebrated the festival of the restoration of the sacrifices of the temple for eight days, and omitted no sort of pleasures thereon; but he feasted them upon very rich and splendid sacrifices; and he honored God, and delighted them by hymns and psalms. Nay, they were so very glad at the revival of their customs, when, after a long time of intermission, they unexpectedly had regained the freedom of their worship, that they made it a law for their posterity, that they should keep a festival, on account of the restoration of their temple worship, for eight days. And from that time to this we celebrate this festival, and call it Lights. I suppose the reason was because this liberty beyond our hopes appeared to us; and that thence was the name given to that festival. ” Josephus, Jewish Antiquities, xii. 7, § 7, #323

To commemorate the miracle of one day’s supply of oil lasting for eight days, a special Hanukkah menorah with nine lights on it instead of the usual seven was lit, one candle per day until on the eighth day all nine candles were lit. The central candle was known as The Servant (Shamash), and was the light from which all the other lights were lit, and was not counted as one of the eight lights. Here is a picture of a regular menorah, such as would have been in the Temple, and here is a Hanukkah menorah.

Hanukkah begins on the 25th day of the 9th biblical month and runs for eight days. Traditionally, on the first day, the first candle of the Hanukkah menorah is lit; on the second day, the first and second candles are lit, and so on through the feast.

Ideas for Celebrating Hanukkah: Cautions (On the pagan origin of the Hanukkah lighting ceremony)

On the feast days it is always good to remember why we celebrate them, and such was even commanded for fathers to teach their children in Torah (Exo 13:3-8, for example). Reading 1 and 2 Maccabees in portions each night for the eight nights of the feast would be good. (There are 16 chapters in 1 Mac, and 15 in 2 Mac; so 2 chapters per night if only 1 Mac is read, or 4 chapters per night if both books are read.)

Also, feast dinners with family and friends are enjoyed each night of the feast, in which foods fried in oil are traditional. After the meal, usually the family visit, play games, and wine, singing, and dancing to all hours is usual. 🙂 It is only recently that gift- giving, in an effort to compete with Christmas, has become a part of the celebration.

ON HANUKKAH | FEASTS OF THE LORD INDEX