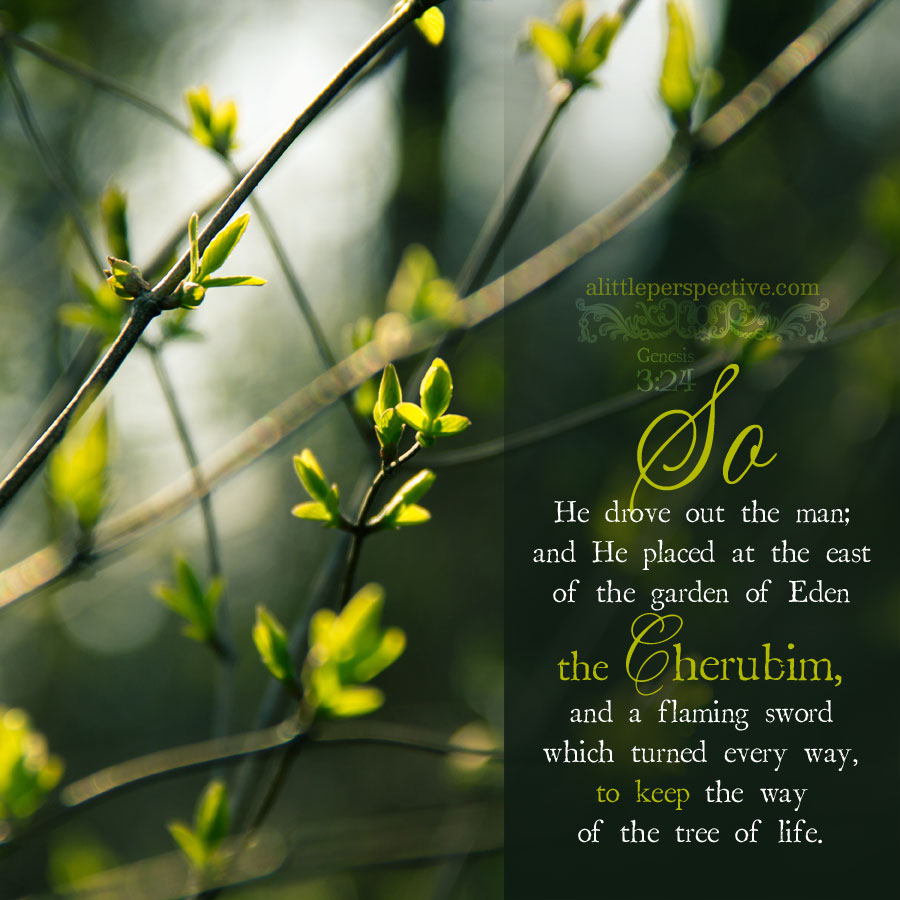 The word translated ‘placed,’ is literally ‘to dwell as in a tabernacle—to inhabit.’ The word ‘cherubim’ has, in the original, the definite article ‘the’ before it. ‘Sword’ is introduced, while no such weapon as a sword had yet been known: the phrase is ‘the fire of wrath;’ a sword being the instrument of wrath afterwards having been applied here; but in this place the primary idea of the word should be used, because the object which came later was then unknown. Besides, here, if the word meant sword, the phrase would literally be ‘the fire of sword’ which is senseless. ‘Turning every way’ is the same word which the translators render in Ezekiel, chapter 1:4, as ‘infolding itself;’ and ‘keep,’ although properly translated, does not, in the original, mean here ‘to guard,’ but ‘to keep’ in the sense of observe; in the same sense in which it is used in the phrase ‘to keep the commandments of the LORD.’ Had the translators of the English Bible, then, not been misled by some idea about a guard around the tree, they would have rendered the verse thus:

So He drove out the man. And He dwelt between the cherubim at the east of the garden of Eden, and the fire of wrath (a fierce fire) infolding itself to preserve inviolate the way of the tree of life.

Let’s look at the Hebrew root word parables under question to discover the true meaning of this passage.

The story: To become a walking (gimel) man (resh) once more (through the idea of a repeat, shin).

To place is Strong’s H7931 שכן shakan, a primitive root meaning, “to settle down, to dwell.” According to Gesenius, the 3-letter root is shin + kaph + nun, but the Ancient Hebrew Lexicon says the shin was transposed from an original sin or samech over time.

The story: A protected (sin) covering (kaph, in the sense of the father’s open palm covering the head of his son when conferring the blessing) under which one continues (nun); i.e., one’s permanent dwelling place rather than a temporary booth.

Cherubim is Strong’s H3742 kerub, a concrete noun meaning, “cherub,” of uncertain derivation. Gesenius speculates that the original verb may have been Strong’s H7126, קרב qarab, a primitive root meaning, “to draw near,” the quph having been transposed for the kaph over time. If so, the 3-letter root is quph + resh + bet.

The story: That which draws (quph, as the light is drawn back to its source when the sun is on the horizon) the man (resh) home (bet). The relation of the root to “cherub” is that the cherubim are always found in the presence of YHVH, His presence being man’s home.

Gesenius says the root can also mean “to hide,” and the Ancient Hebrew Lexicon corroborates this meaning. The related words of veil (hiding the hair or face of a woman), lizard (a hidden reptile), secret (hidden from common knowledge), and wrap (enclosing something which hides it from view) bring out the common thread of something hidden. So the story the pictographs are telling is of authority (lamed) that is wondrous or supernatural (hey) which surrounds (tet, or hides, as a wrap which surrounds hides what it wraps from view).

This word occurs only twice in the Hebrew Bible:

Why is this word used to mean both the flame of the Cherubim, and the secret arts of the Egyptian magicians? The wondrous action of the Cherubim, whatever it was, was a sign of spiritual authority which hid the way to the tree of life. The arts of the magicians were accomplished through real spiritual authority, not of God, but of the occult, which was hidden or secret from common knowledge. According to Webster’s Dictionary, the word occult means, “to shut off from view or exposure, to cover.”

In antiquity animals were slaughtered for the family’s use for meat, hides, glue, and even the bone. The labor of slaughter was done outside (chet) by the man (resh) for the benefit of the houshold (bet). In all of the verb’s uses in Scripture, it carries the meaning of drying up, laying waste, or making desolate.

The story: To upraise (hey) a flask, that is, the mouth (pey) opened (kaph), i.e. a vessel for storing contents. You upraise a flask to overturn it to pour out its contents.

To keep is Strong’s H8104 שמר shamar, a primitive root meaning, “to keep, to watch, to guard as a husbandman or shepherd.” The 3-letter root is shin + mem + resh. The Ancient Hebrew Lexicon tells us that the shin + mem in this root were originally a sin + nun, the similar sounds becoming transposed over time. So the 3-letter root for the sake of the Hebrew parable is sin + nun + resh.

Shepherds would surround their flocks at night with thorn branches to protect them from predators when they were pasturing them away from the fold. They kept or guarded their flocks so that their children would be provided for. Thus, to protect (sin) for the next generation (nun) that which is of first importance (resh).

The Hebrew in its original meanings seems to bear out David Morison’s explanation of the verse and make sense of it.