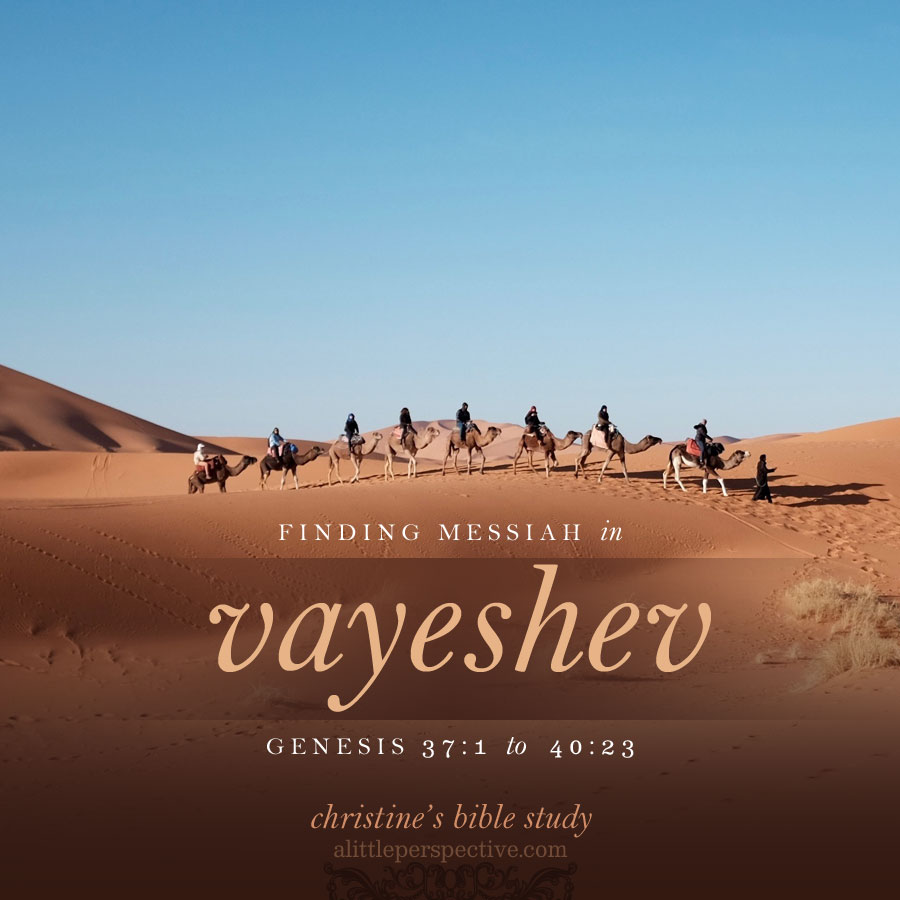 Joseph’s first dream comes to pass, as we find out in the next chapters. His second dream, however, does not seem to come to pass, because there is no record of Jacob or Rachel, who has of course passed away, bowing down to Joseph, even when Jacob came to him in Egypt. But this prophetic dream will indeed come to pass, when we consider that the fathers, mothers, and children of Israel will indeed come to bow down—to the Messiah as King. This is our first clue that Scripture gives us, that the life of Joseph, like Isaac, is a type of Messiah in Torah.

38:1-30 {s} Judah departed from his brothers among Canaanites

Tamar’s death seemed certain, but then she was released from her sentence of death. This is the Messiah sign of resurrection life, and when we find it in Torah, Moses is writing about Messiah.

“For had you believed Moses, you would have believed Me, for he wrote of Me.” Yeshua, Joh 5:46

Tamar was delivered from death when it was discovered she possessed the pledge Judah had given her. We have also been given a pledge by Messiah Yeshua, Judah’s descendant—the Holy Spirit:

In [Him] you also trusted, after you heard the word of truth, the Gospel of your salvation. In Him also you believed, and you were sealed with the Holy Spirit of promise, which is the guarantee of our inheritance until the redemption of the purchased possession, unto the praise of His glory. Eph 1:13-14

39:1-23 {p} Joseph departed from his brothers among Egyptians

There is an extraordinary number of threes in these chapters about the life of Joseph. He was made overseer three times, for his father, for Potiphar, and for the keeper of the prison; he was cast down three times, into a pit, into slavery, and into prison. We saw in chapter 37 that Joseph is a prophetic type of Messiah, three being a sign of Messiah in Torah. The prophecy of Messiah, is that just as Joseph was preeminent yet cast down, so also is Messiah.

Let this mind be in you, which was also in Messiah Yeshua, who, being in the form of God, thought it not robbery to be equal with God, but made Himself of no reputation, and took upon Him the form of a servant, and was made in the likeness of men. And being found in fashion as a man, He humbled Himself, and became obedient unto death, even the death of the cross. Phi 2:5-8

There are more threes as signs of Messiah in chapter 40. In the chief butler’s dream, the vine had three branches which budded, and Joseph’s interpretation was that the three branches meant three days. On the third day, Pharaoh will raise him up out of the prison house and restore his former life to him. Besides the sign of three, this is also the sign of resurrection and life. Being cast into slavery or being cast into prison is a Torah metaphor for death, for it ends the life previously known. So the chief butler’s previous life was ended when he was cast into prison, but on the third day, according to the interpretation, he would be raised up and his life would be restored to him.

In the chief baker’s dream, the three baskets also meant three days. But on the third day, the chief baker would be lifted out of the prison house and executed for his crime. I think the point is not so much that the chief baker’s outcome was different from the chief butler’s, but that two prisoners, two dreams, and two interpretations, yet of the same space of three days to be raised up out of prison, are a witness from God that the dreams and interpretations are from Him, for every fact is established on the testimony of two witnesses.

And because the dream was doubled unto Pharaoh twice; it is because the thing is established by God, and God will shortly bring it to pass. Gen 41:32

“But if he will not hear you, then take with you one or two more, that in the mouth of two or three witnesses every word may be established.” Yeshua, Mat 18:16

GENESIS 37:1-40:23 ANNUAL VAYESHEV “AND HE DWELT” OUTLINE | GENESIS in CHIASTIC STRUCTURE
FINDING MESSIAH in TORAH: A MESSIANIC DISCOVERY THROUGH the TORAH PORTIONS
THE LAW of LOVE: THE GOSPEL of GRACE REVEALED in the COMMANDMENTS OF GOD