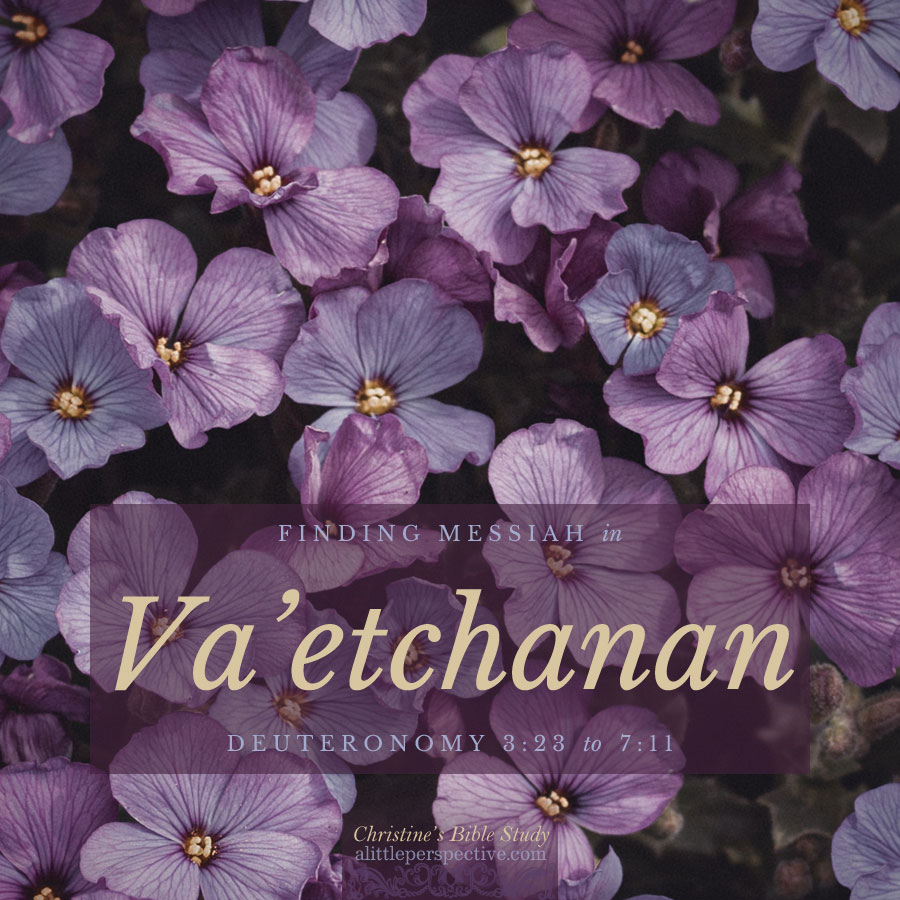 In this section of Scripture, we come to the first p’tuchach, or strong paragraph division, in Deuteronomy, and thus complete the first strong theme. These are the paragraphs, according to the Hebrew divisions: 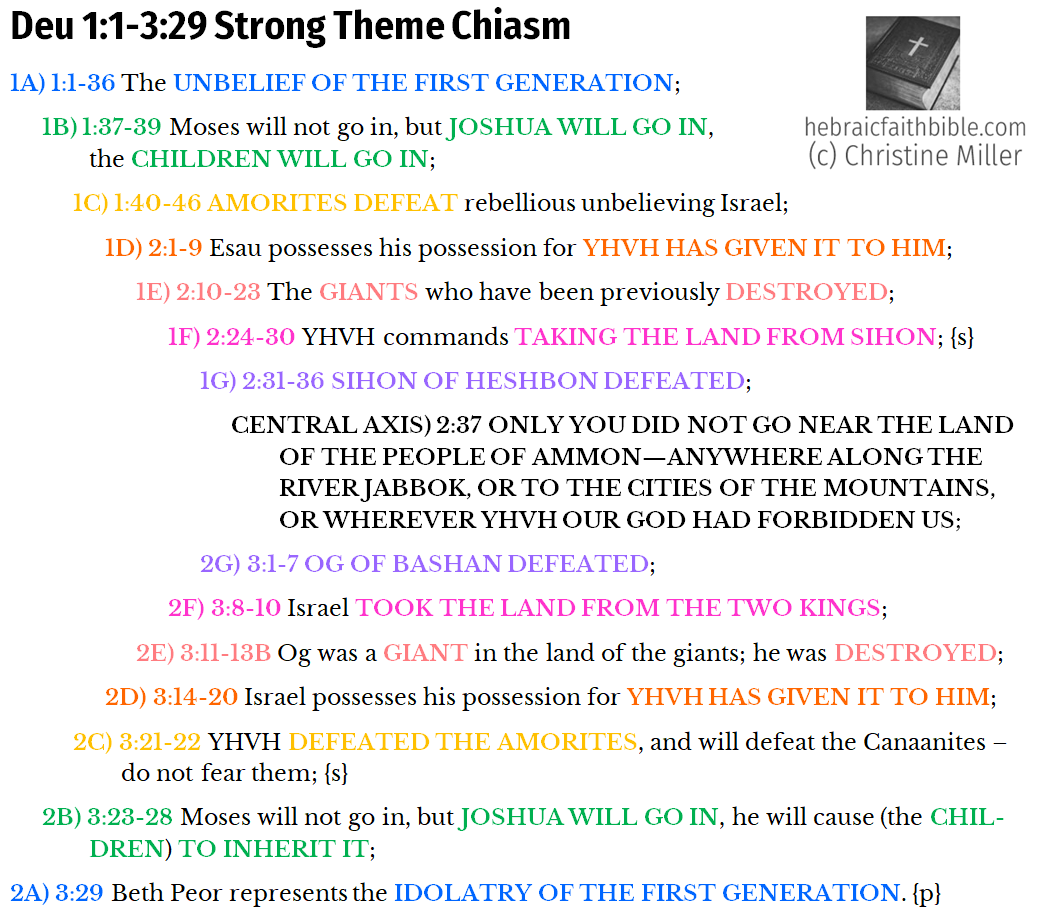 Torah is repeating ad nauseum that it is Joshua, Yeshua by prophetic type, and not Moses, or works of the Law, that will cause us to inherit our promise. But notice something else brought out by this structure, in the B pairs:

But charge Joshua, and encourage him, and strengthen him; for he shall go over before this people, and he shall cause them to inherit the land which you shall see.” Deu 3:28

If we were just reading the text of Scripture, and unaware of the structure, we might miss what Torah is revealing. The matching pair brings it out:

Joshua the son of Nun, who stands before you, he shall go in; encourage him, for he shall cause Israel to inherit it. Moreover your little ones, that you said should be a prey, and your children, that this day have no knowledge of good or evil, they shall go in, and to them will I give it, and they shall possess it. Deu 1:38-39

Then Yeshua called a little child to Him, set him in the midst of them, and said, “Assuredly, I say to you, unless you are converted and become as little children, you will by no means enter the kingdom of heaven.” Mat 18:2-3

The children inherit the promise. This is the Gospel of Grace preached from Torah!

The central axis of the whole chiasm for Va’etchanan is this paragraph:

Here is its structure: 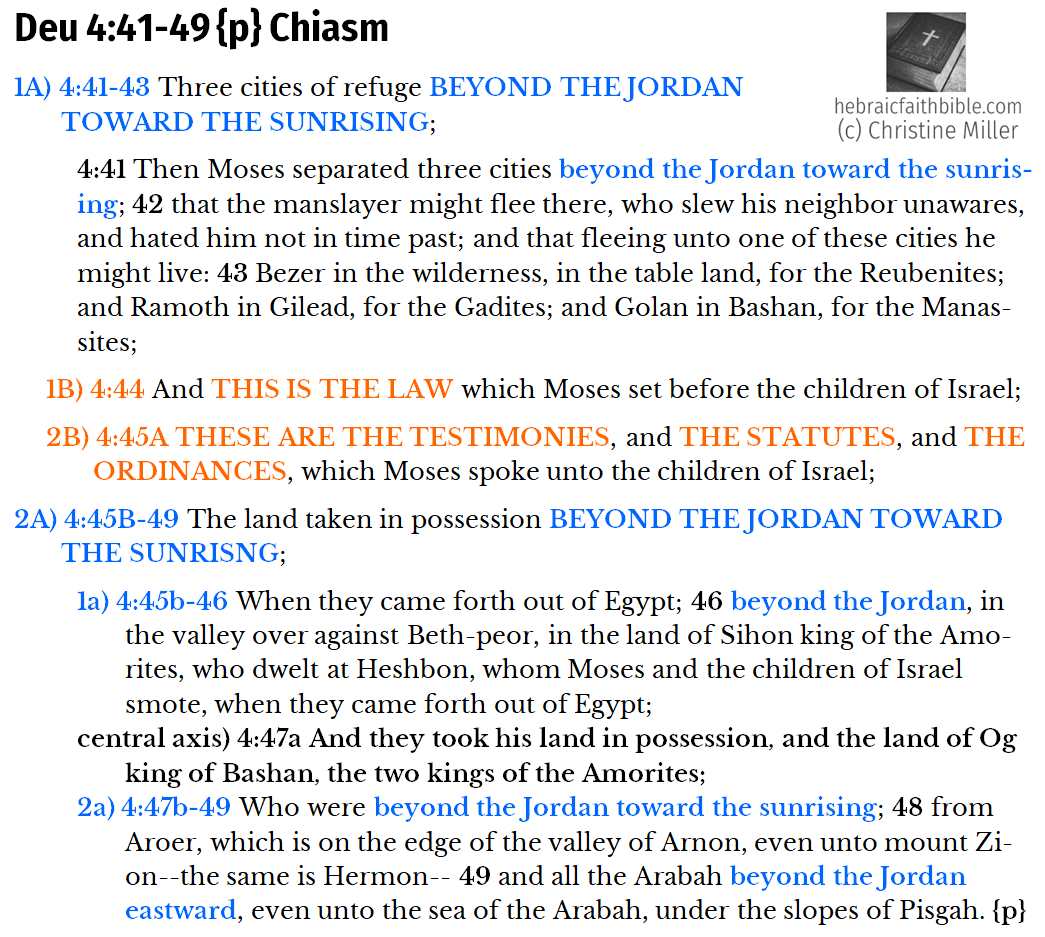 If humans were dividing the paragraphs according to human logic, there would be two paragraphs here instead of one:

But this is precisely why cities of refuge, that is, mercy when in violation of the law, and the law and testimonies, that is, what is right and just, are in a single paragraph.

We have already seen that the cities of refuge are a sign of Messiah, a prophetic type of salvation from deserved death. So Scripture places a picture of Messiah in the same paragraph with “This is the law (Torah) … testimonies, statutes, and judgments …”.

His law, testimonies, statutes, and judgments are His Word. He spoke His commandments – His Word – to Israel. One of the most common phrases in the first five books of the Bible, is, “Then YHVH spoke to Moses, saying …”. When Yeshua our Messiah was born a little baby in Bethlehem, He was the Word of God made flesh, full of grace and truth. The written Word of God at that time was contained in the Old Testament. The New had not been written yet. Yeshua was the entirety of the Old Testament made flesh, full of grace and truth.

I know this surprises us! But really, why should it? Yeshua told us that Moses wrote about Him, and that if we believed Moses, we would believe Him (Joh 5:46). Moses and Yeshua are in perfect agreement – both full of grace and truth. The enemy has lied to us long enough about the “obsolete” Old Testament, and we can see why: his goal is to steal from us, to destroy us, and to kill us (Joh 10:10), but the purpose of Torah obedience is to keep us alive in this life and to bless us!

Even though man thinks that mercy and righteousness are opposites, God reveals that  they are two sides of the same coin. His Law is Love.

Let us remember that in the tabernacle, the mercy seat covers the ark, in which are contained the two tablets of the Ten Commandments. Of course God does not mean that He will show mercy only if the commandments are kept perfectly, without the slightest error. For then why would mercy be necessary?

But the one who loves God, and who expresses his love for God in the way that God finds meaningful – by obedience to His commandments as a way of life – with the attitude of, they are ever before me, and I am ever seeking after more perfect obedience out of my love for God – to that one, God shows mercy.

His mercy is shown in Messiah Yeshua, who nailed the list of our transgressions of the commandments to the cross with Him.

And you, being dead in your trespasses and the uncircumcision of your flesh, He has made alive together with Him, having forgiven you all trespasses, having wiped out the certificate of debt that was against us, which was contrary to us. And He has taken it out of the way, having nailed it to the cross. Col 2:13-14

The phrase, “certificate of debt,” in the Greek, is chirograph. It simply means, something hand-written. But in Paul’s day, chirographs were nailed to the execution stakes along with the criminal who was being executed. It was the list of his crimes explaining why he was being executed. This happened to Yeshua, but since Pilate could not determine what His transgression was, he nailed this chirograph above His head: “The King of the Jews.” Chirographs were also posted at the door of a jail cell when a prisoner was jailed, so that any jailer or magistrate could determine the transgression of the law for which the prisoner was in chains. This background makes Acts 25 more clear. Paul did not have a chirograph, and this is why he had to be heard so many times. The rulers were trying to determine the list of his crimes before he was sent to Ceasar.

The word “requirements” found in Col 2:14 in some translations, is not actually in the Greek. Other translations insert “debt,” but that is not in the Greek either. Paul makes the context clear, because in verse 13 he says that we had died in our transgressions, which are crimes against the law, or Torah. In the spiritual sense, before we came to Messiah, we were executed on the execution stake already — we were dead — because of our crimes against the Torah, since the wages of sin, which Scripture defines as breaking Torah (1 Joh 3:4), is death (Rom 6:23). That is the state that Messiah found us in.

Messiah then canceled out our chirograph, the list of our transgressions. This list is what was hostile to us. This indictment, this guilty verdict, this finding that we had in fact sinned, was the decree against us. Yeshua Messiah took our chirograph and nailed it itself to His cross.

The section is coming …

DEUTERONOMY 3:23-7:11 ANNUAL VA’ETCHANAN “AND I PLEADED” OUTLINE | DEUTERONOMY INDEX of STUDIES
THE LAW of LOVE: THE GOSPEL of GRACE REVEALED in the COMMANDMENTS of GOD