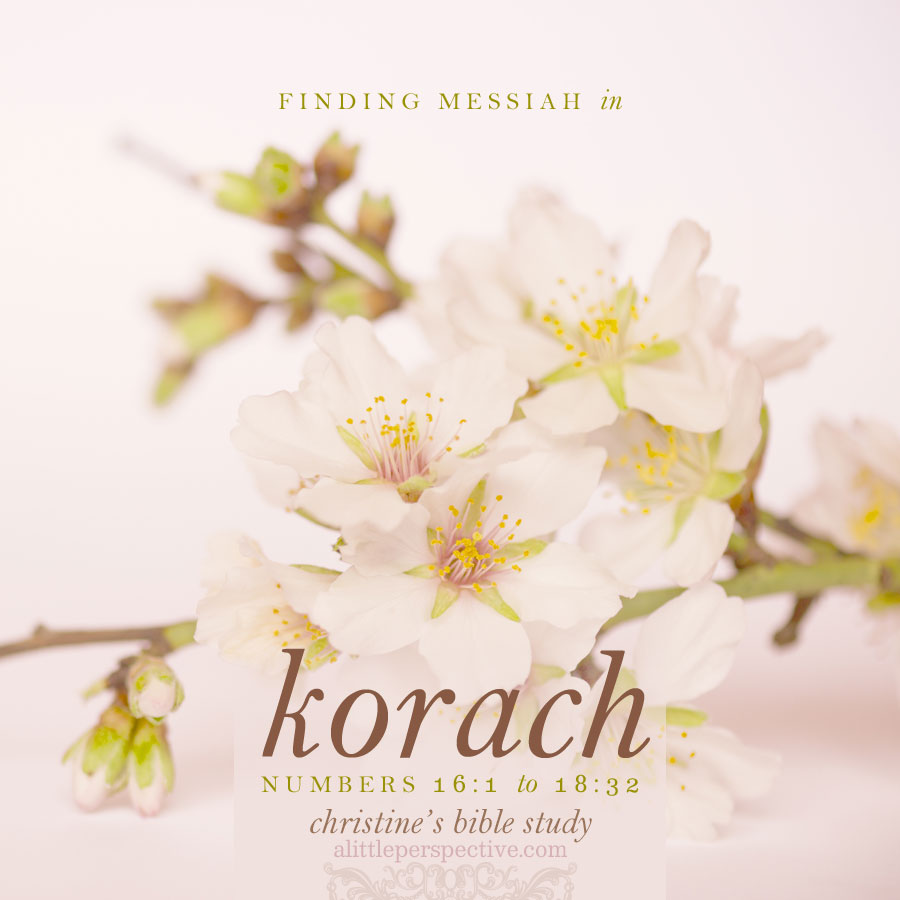 Scripture has set up a repeating pattern with Moses and the children of Israel since departing Egypt, which culminates in this chapter. Moses has consistently acted as the intercessor between God and man, foreshadowing Messiah Yeshua.

Now all the people witnessed the thunderings, the lightning flashes, the sound of the trumpet, and the mountain smoking; and when the people saw it, they trembled and stood afar off. Then they said to Moses, “You speak with us, and we will hear; but let not God speak with us, lest we die.” Exo 20:18-19

… When Moses prayed to YHVH, the fire was quenched. Num 11:2

“… Pardon the iniquity of this people, I pray, according to the greatness of Your mercy …” Num 14:19

Then they fell [Moses and Aaron] on their faces, and said, “O God, the God of the spirits of all flesh, shall one man sin, and You be angry with all the congregation?” Num 16:22

And YHVH spoke to Moses, saying, “Get away from among this congregation, that I may consume them in a moment.” And they fell [Moses and Aaron] on their faces. So Moses said to Aaron, “Take a censer and put fire in it from the altar, put incense on it, and take it quickly to the congregation and make atonement for them; for wrath has gone out from YHVH. The plague has begun.”  Then Aaron took it as Moses commanded, and ran into the midst of the assembly; and already the plague had begun among the people. So he put in the incense and made atonement for the people. And he stood between the dead and the living; so the plague was stopped. Num 16:44-48

Then Yeshua said, “Father, forgive them, for they do not know what they do.” And they divided His garments and cast lots. Luk 23:34

This self-sacrificial intercession to turn away the just wrath of God from the willful rebellion and sin of the people, is a prophetic picture of Messiah who is to come.

The chiastic structure formed by Korach has Aaron’s rod that budded as its central axis. 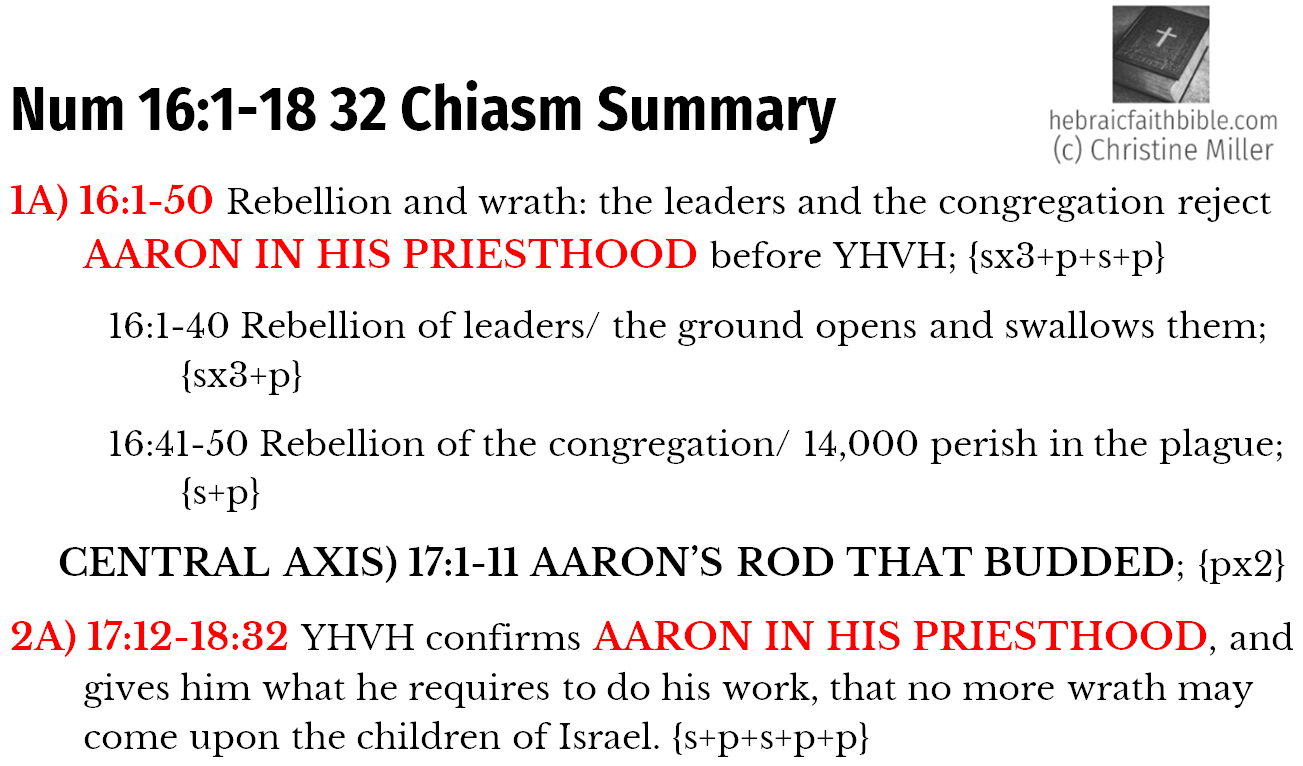 Aaron as high priest is another foreshadow of Messiah from Torah. The leaders and the congregation of Israel also rejected Messiah from mediating for them. But just as the dead stick of Aaron’s rod was placed in a box, and found to have new life when it was opened, bringing forth both flowers and ripe almonds, so the dead body of Messiah was placed in the tomb, and when it was opened, He was not there, but was found to have been raised with new life.

And YHVH said unto Moses, “Bring Aaron’s rod again before the testimony, to be kept for a sign against the rebels; and you shall surely put away their murmurings from Me, that they die not.” Num 17:10

By the sign of resurrection life, a sign of Messiah, YHVH will put away the complaints of the children of Israel.

As well, the strong theme of Num 17:12-18:7 resolves into the following chiastic structure. 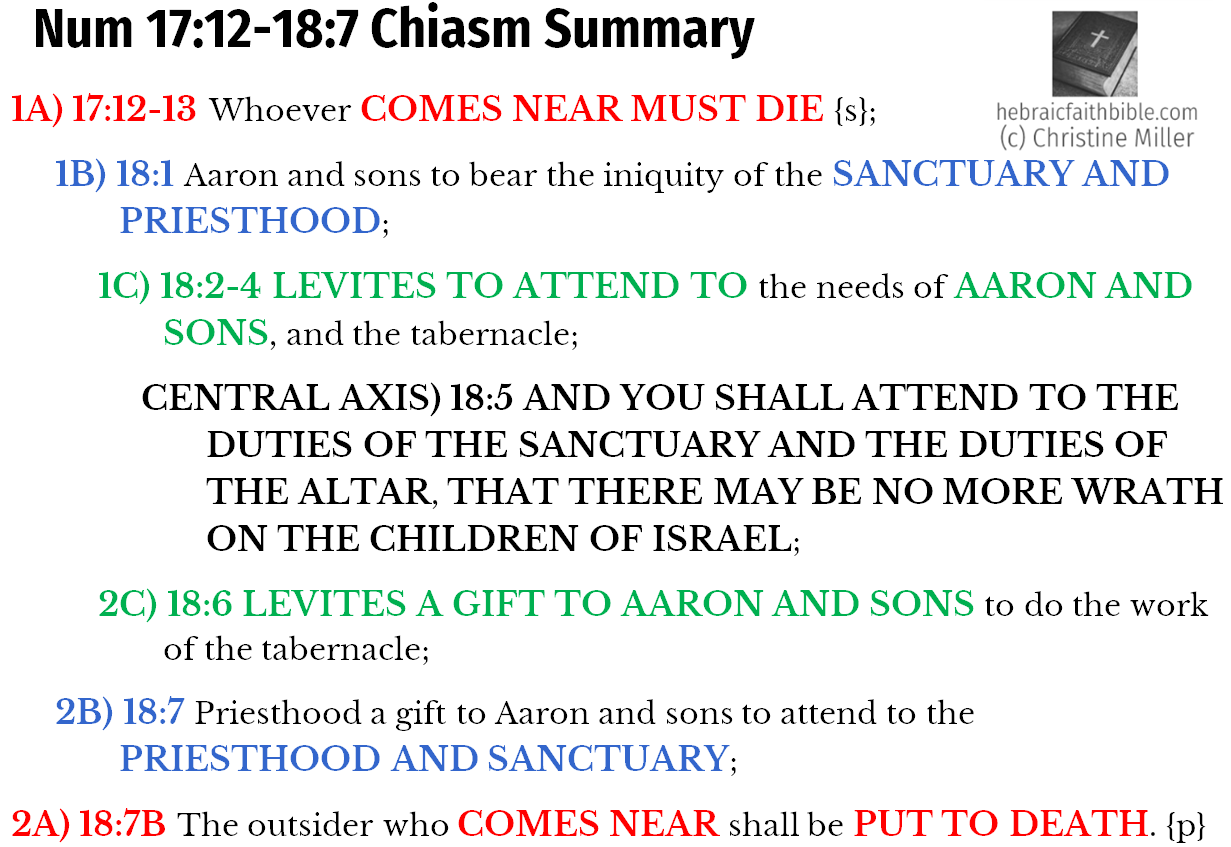 These are hard chapters. The generation of unbelievers is not going to inherit the promise, and the people who went to war anyway were defeated. The man who gathered sticks on the Sabbath was stoned to death with stones. That was not Israel’s idea or Moses’ idea, that was done at the direction of YHVH.

But the structure highlights that God does not want wrath to come upon the children of Israel. He doesn’t delight in plague or death or destruction.

“Cast away from you all the transgressions which you have committed, and get yourselves a new heart and a new spirit. For why should you die, O house of Israel? For I have no pleasure in the death of one who dies,” says the Lord YHVH. “Therefore turn and live!” Eze 18:31-32

NUMBERS 16:1-18:32 ANNUAL KORACH “KORAH” OUTLINE | NUMBERS in CHIASTIC STRUCTURE
FINDING MESSIAH in TORAH: A MESSIANIC DISCOVERY THROUGH the TORAH PORTIONS
THE LAW of LOVE: THE GOSPEL of GRACE REVEALED in the COMMANDMENTS OF GOD