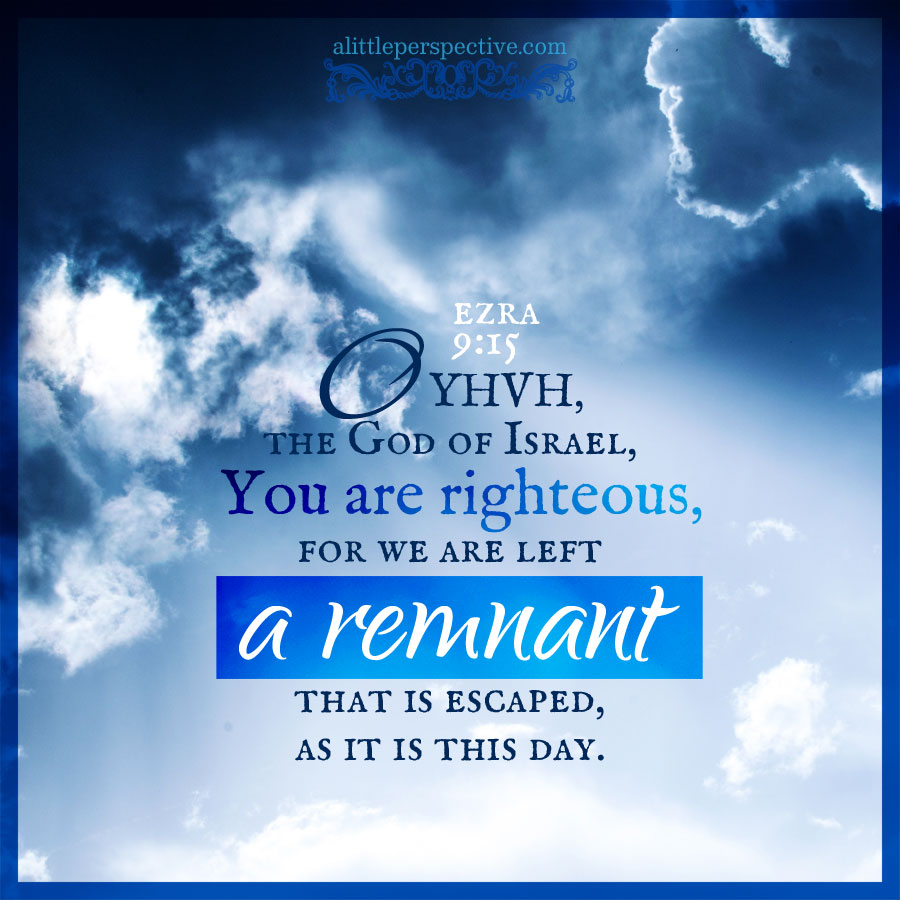 When these things were done, the leaders came to me, saying, “The people of Israel and the priests and the Levites have not separated themselves from the peoples of the lands, with respect to the abominations of the Canaanites, the Hittites, the Perizzites, the Jebusites, the Ammonites, the Moabites, the Egyptians, and the Amorites. For they have taken some of their daughters as wives for themselves and their sons, so that the holy seed is mixed with the peoples of those lands. Indeed, the hand of the leaders and rulers has been foremost in this trespass.” Ezr 9:1-2

The remnant of Israel who had been returned to the land, were its holy seed. The people would be planted in the land, and take root, and bear fruit, that is, children who served the LORD their God, walking in His ways. They did not get this idea out of thin air; Isaiah prophesied that the heart of Israel would remain heavy, without repentance, until the land was laid waste and without inhabitant; then a tenth, a remnant, will return to it, who will be its holy seed (Isa 6:9-13). The holy seed will have understanding, whose hearts were not heavy, who walked in repentance and in the ways of the LORD God.

The 90% who were content with idolatry and paganism, would remain in Babylon and environs, the ancient mother of idolatry and paganism. The 10% whose hearts yearned for Jerusalem and the LORD their God, would sacrifice all to return to the land when the opportunity arose. The ten percent were the holy seed. This is interesting, because the tithe is always holy to the LORD (Lev 27:30).

The remnant’s concern with the marriages was for the purity of the seed, or children, for in Torah, it is forbidden to mix seed in a field, so that the next generation will not be the same as the parent generation (Deu 22:9). Is the LORD concerned for seed only? Yes, He is concerned for seed, but also, He is teaching a lesson about passing the faith of the parents to the next generation. This is a seamless process when the purity of the seed is protected; i.e., the parents are both equal (2 Cor 6:14), and the father himself obeys the word of the LORD God (Deu 30:1-6), and teaches God’s word to his children (Deu 6:6-7).

But when the parents are of different spiritual genealogies, then the children can be one, or the other, or a mixture of light and darkness. So while children can be rescued, or purified, of their mixed spiritual genealogy, it is a hard row to hoe. Removing impurity requires trial by fire, and that is always painful. The LORD gives His commandments for us to obey in order to bless us. It is far easier to protect the purity of the seed in the first place, than to try to purify the seed by fire, melting heat, sorrow, and consequences later.

But then the gospel of grace came into their lives, and a husband here, a wife there heard the word of grace and responded to it. They were washed, cleansed, and transformed from unclean to clean. They were translated from the kingdom of darkness to the kingdom of His dear Son. Now, in a previously established family, there is an unequal mixing. One parent has become light, the other has remained as they were, darkness.

In that instance, Paul teaches, that the (believing) wife is not to leave her (unbelieving) husband, nor is the (believing) husband to divorce his (unbelieving) wife. As the Spirit has elected the wife or husband for salvation, that saved spouse is to continue in faith, that the Spirit has also elected their spouses and children for salvation. Why can we have that confidence? Because it is the Spirit Himself who teaches that a house divided against itself cannot stand. He has sown the Seed of Messiah into that household, so that it would grow and bear fruit; that is, more lives transformed and translated in Messiah. The believing wife or husband is to live in such a way, bearing the fruit of the Spirit (which contains the Seed within it, who is Messiah Yeshua the Promised Seed), that the Spirit can use their witness to draw them to Himself.

Ezra was dealing with marriages which were mixed from the beginning; so that the holy seed willingly chose to be yoked to the unholy. That Israel repented of this sin also, reveals that this remnant was in fact the holy seed, for repentance when convicted of sin characterizes the holy seed.