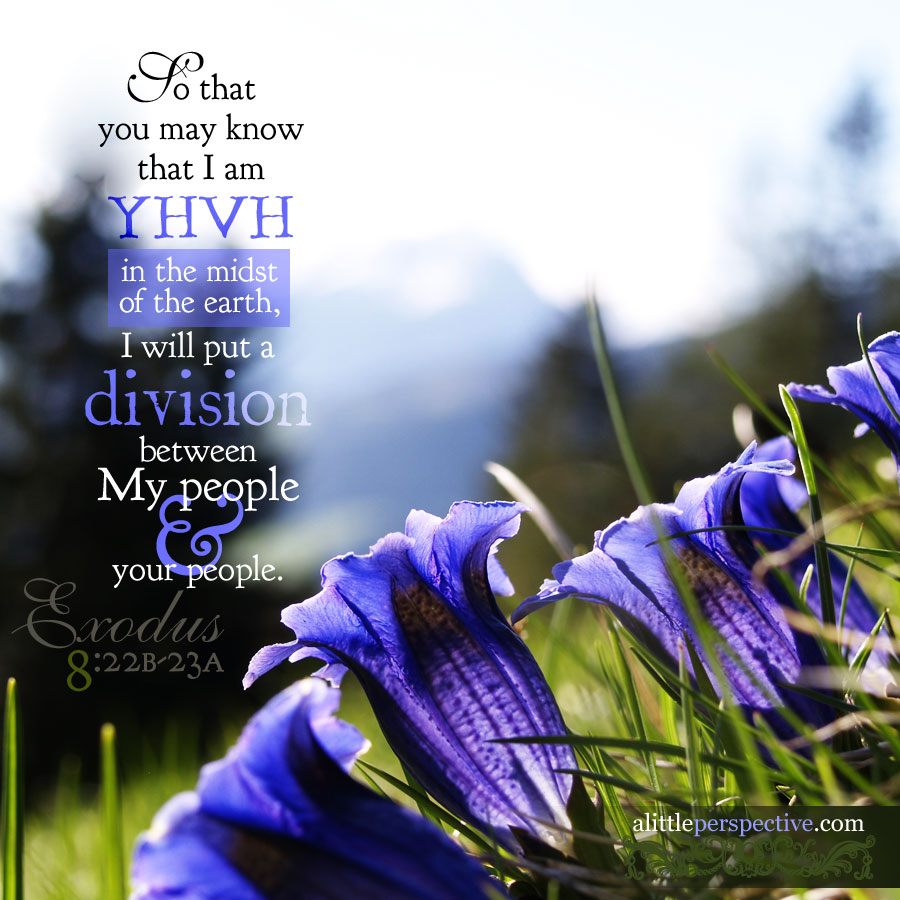 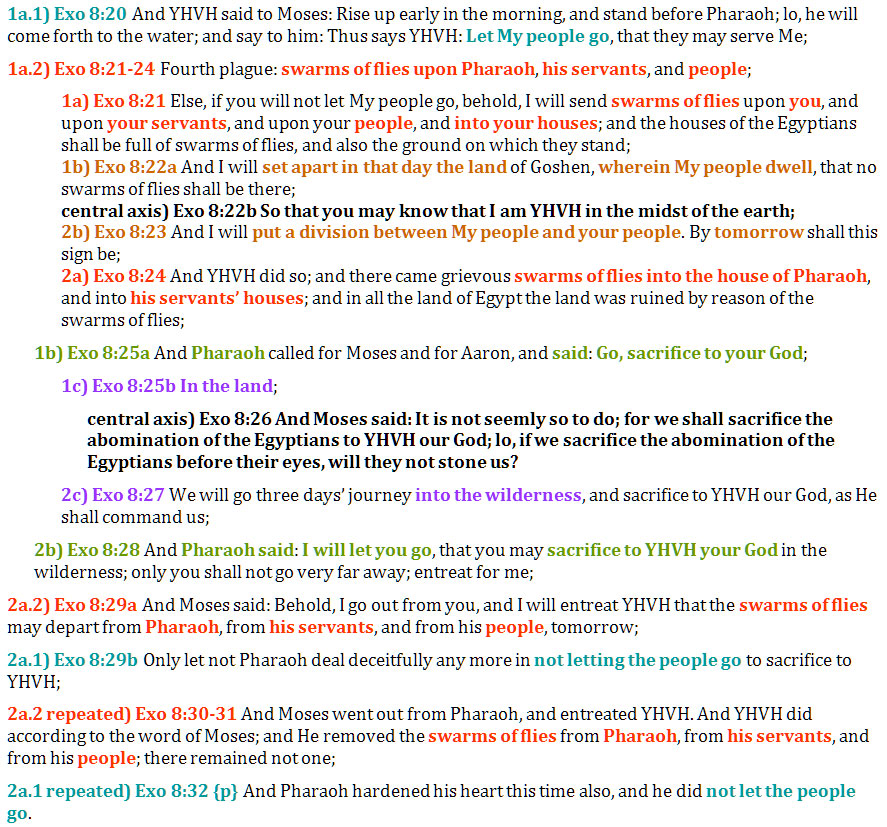 Glory increases incrementally to YHVH in this plague over the last plague of gnats, as this plague is the first where the children of Israel are set apart from the Egyptians, and no flies are found in Goshen.

It seemed the central axis highlighted the abomination of the Egyptians, which I did not at first understand, and so I did some digging:

Abomination is Strong’s 8441, tow’ebah, a concrete noun meaning, “abomination;” from Strong’s 8581 תעב ta’ab, a primitive root meaning, “to abhor, to occasion horror in anyone.” The pictographs are tav + ayin + bet. And yet as I was meditating on the story the pictographs are telling, I remembered something I had read about the ayin in the Ancient Hebrew Lexicon:

Ghah § While this letter existed in ancient Semitic languages and some modern Semitic languages, it no longer exists in the modern Hebrew. Instead it has been absorbed into the letter ע (ayin). While the evidence exists showing that this is in fact a separate letter, there is very little evidence for reconstructing its original pictograph. The Ugarit and Arabic languages wrote this letter the same as the ayin but with an additional line or dot. The closest candidate for this letter is the §, a twisted rope, as found in some ancient Semitic inscriptions.

In the Arabic language this letter is called the ghah but originally may have had the name ghah meaning “twisted”. The meaning of the letter ghah is twisted from the twisting fibers of a rope and from this come the meaning of goats from their twisted horns. As goats are dark in color, this letter also carries the meaning of dark.

Because the Greek language transliterates this letter with a gamma (g sound) we know that this letter originally had a type of “g” sound such as in the word ring.

I tested the theory that the ayin in this root may have been an original ghah:

Story: The marked (tav) goat (ghah), i.e., the scapegoat, upon which the lot fell, which carries all the iniquities of the house (bet). Thus, the scapegoat becomes a proxy for sin which YHVH abhors.

He shall take the two goats and present them before the Lord at the door of the tabernacle of meeting. Then Aaron shall cast lots for the two goats: one lot for the Lord and the other lot for the scapegoat. And Aaron shall bring the goat on which the Lord’s lot fell, and offer it as a sin offering. But the goat on which the lot fell to be the scapegoat shall be presented alive before the Lord, to make atonement upon it, and to let it go as the scapegoat into the wilderness. Lev 16:7-10

And when he has made an end of atoning for the Holy Place, the tabernacle of meeting, and the altar, he shall bring the live goat. Aaron shall lay both his hands on the head of the live goat, confess over it all the iniquities of the children of Israel, and all their transgressions, concerning all their sins, putting them on the head of the goat, and shall send it away into the wilderness by the hand of a suitable man. The goat shall bear on itself all their iniquities to an uninhabited land; and he shall release the goat in the wilderness. Lev 16:20-22

The central axis ends up highlighting the Day of Atonement and thus the gospel! Amazing.

The word here for “abomination” is used throughout the Torah and the Prophets when speaking of that which is abominable to YHVH, but it is not the same word used for the abomination of desolation in Daniel. Oh, that we had ten hours to every day just for studying the Bible! Tomorrow …