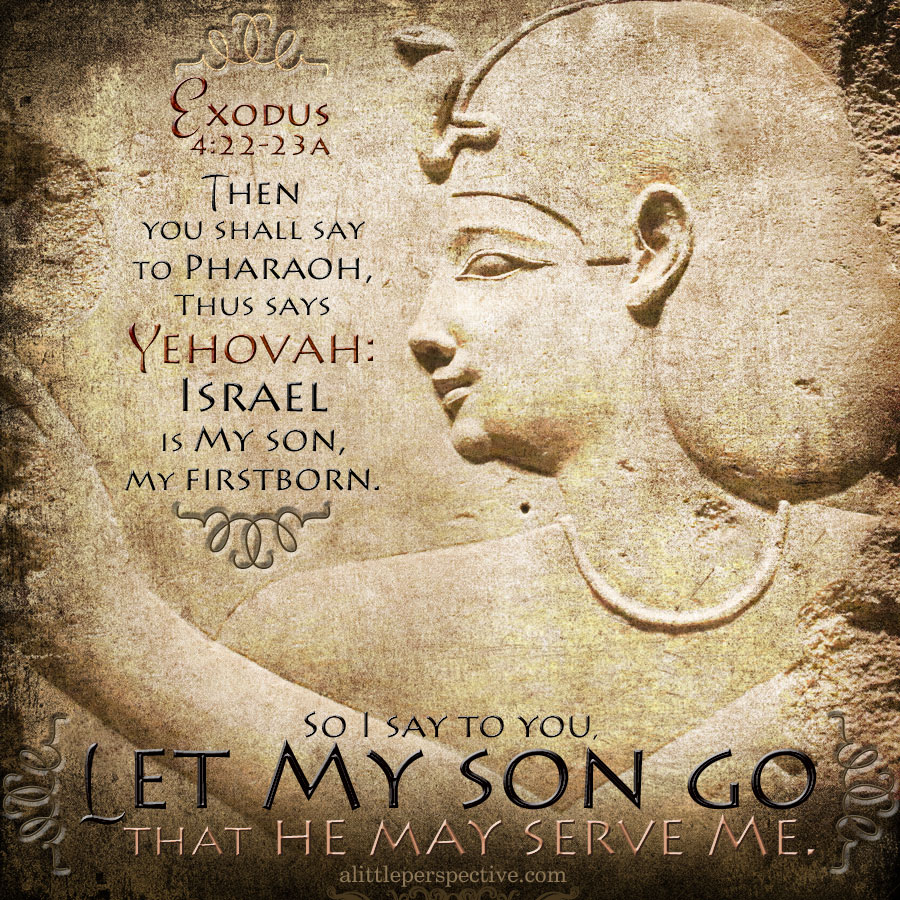 18 And Moses went and returned to Jethro his father-in-law, and said to him: “Let me go, I pray you, and return to my brethren that are in Egypt, and see whether they be yet alive.” And Jethro said to Moses: “Go in peace.” 19 And Yehovah said to Moses in Midian: “Go, return into Egypt; for all the men are dead that sought your life.” 20 And Moses took his wife and his sons, and set them upon a donkey, and he returned to the land of Egypt; and Moses took the rod of God in his hand.  21 And Yehovah said to Moses: “When you go back into Egypt, see that you do before Pharaoh all the wonders which I have put in your hand; but I will harden his heart, and he will not let the people go. 22 And you shall say to Pharaoh: Thus says Yehovah: Israel is My son, My firstborn. 23 And I have said to you: Let My son go, that he may serve Me; and you have refused to let him go. Behold, I will slay your son, your firstborn.” 24 And it came to pass on the way at the lodging-place, that Yehovah met him, and sought to kill him. 25 Then Zipporah took a flint, and cut off the foreskin of her son, and cast it at his feet; and she said: “Surely you are a bridegroom of blood to me.” 26 So He let him alone. Then she said: A bridegroom of blood in regard of the circumcision. {p} Exo 4:18-26

This question has always plagued me about this paragraph: Why did God provide a deliverer for Israel through miraculous circumstances, and call, equip, and anoint him for his task, then seek to kill him when he was finally on his way back to Egypt to execute his commission?

However, I believe that when Moses met God in the burning bush, it became fresh on his heart again to circumcise his sons after the covenant of God. It is clear that Zipporah remained opposed. Moses did not overrule his wife, but took the rod of God in his hand to accomplish his commission.

The rod of God represents the authority of God. The Hebrew letter lamed originally was a pictograph of the shepherd’s staff or rod, the tool of his office which allowed him to lead and direct the sheep. The lamed then can not only mean to shepherd, direct, or teach, but also to wield authority. The scepter of the king is the rod of his authority. When the authority of Aaron to act as high priest was questioned among the elders of Israel, it was Aaron’s rod that budded out of all the other rods.

God charged and anointed Moses with authority to command Pharaoh and accomplish deliverance for Israel, and the rod of God in his hand was the symbol that his message was indeed, “Thus saith the Lord.” The signs and wonders which the rod allowed Moses to perform, confirmed the Word of the Lord, and established that Moses’ authority had in fact been given to him by God.

But if Moses would not obey God when his wife said, “No;” how was he going to obey God when Pharaoh said, “No?” If he would not do the simple thing of circumcising his sons in faith, how was he going to do the hard thing of shepherding six million of the children of Israel? When Moses showed God that he would not exercise his rightful authority over his wife, God took the drastic step of seeking to kill Moses, as the Scripture records. In other words, the rod of God must necessarily be wielded by a man submitted in faith and in obedience to the Lord his God above all others.

We know nothing about how the Lord sought Moses’ life. If it had been the Lord’s intention to have Moses dead and go on to the next candidate, Moses would be dead, and a struggle would not have ensued. (The Lord God wrestled with Jacob also, when Jacob faced his crossroads of obedience.) That Moses and Zipporah both knew why Moses’ life was being sought, and who was seeking it, is clear. Zipporah relented to save her husband’s life, however casting the foreskin disdainfully at his feet, and calling him a husband of blood.

But Moses learned that day just how serious the Lord was when He asked something of him. I believe this incident was a turning point in Moses’ life and heart, which strengthened him to become the servant faithful in all His house for the next 40 years, as Scripture records of him.

Thus the theme of the paragraph, is Moses returning to Egypt with authority (i.e., the rod of God) coupled with obedience (i.e., the circumcision). 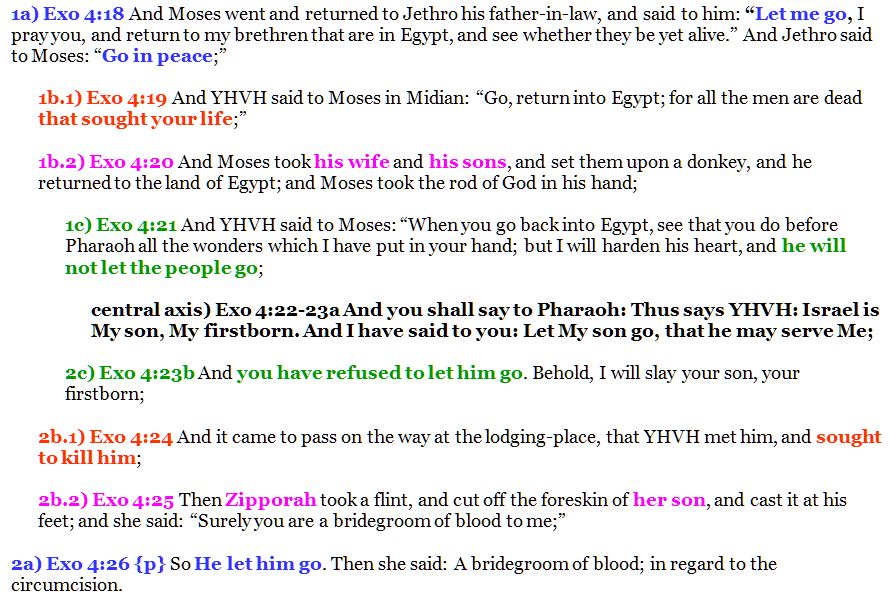