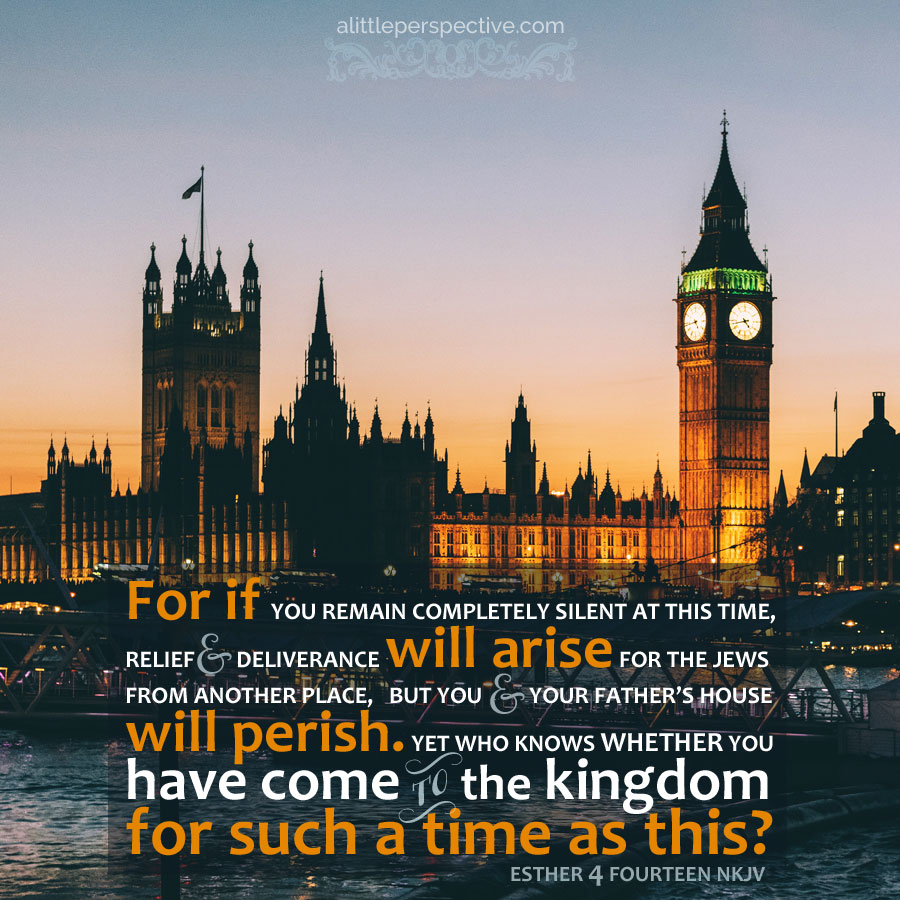 Read Esther 3 and 4 at Bible Gateway.

Est 3:1-7 {s} Haman promoted/ makes Mordecai his enemy, when he does not do him homage
Est 3:8-15 {s} Haman plots to destroy the Jews/ publishes the decree by the authority of the king
Est 4:1-5:14 {s} Esther learns of the plot + risks her life to petition the king

1a) Est 3:1-3, The king promoted Haman/ the king’s servants did him homage, but Mordecai did not;

1b) Est 3:4a, They spoke to him daily but he would not listen to them;

2b) Est 3:4c, To see whether Mordecai’s words would stand;

2a) Est 3:4d-6, When Haman saw that Mordecai did him no homage, he sought to destroy the Jews;

1a) Est 3:4d, For Mordecai had told them that he was a Jew;
central axis) Est 3:5, When Haman saw that Mordecai did not bow or pay him homage, Haman was filled with wrath;
2a) Est 3:6, Haman sought to destroy all the Jews in Ahasuerus’ kingdom – Mordecai’s people.

1a) Est 3:8-9a, Haman to the king: Let a decree be written to destroy the people who do not keep the king’s laws;
1b) Est 3:9b, I will pay 10,000 talents of silver to the treasury for those who do the work;
central axis) Est 3:10, So the king took his signet ring from his hand and gave it to Haman, the son of Hammedatha the Agagite, the enemy of the Jews;
2b) Est 3:11, The king to Haman: The money + people are given/ do what seems good to you;
2a) Est 3:12a, The king’s scribes called/ a decree written according Haman’s command;

central axis) Est 3:12b, To the king’s satraps, to the governors who were over each province, to the officials of all people, to every province according to its script, and to every people in their language;

2b) Est 3:12c, In the name of King Ahasuerus it was written/ sealed with the king’s signet ring;

We have seen this pattern over and over in Scripture: the enemy of God’s people in concert with a pagan or Gentile king, plans the death or destruction of God’s people. In Exodus, Pharaoh sought to commit genocide against the Hebrews when he commanded the baby boys to be killed at birth. With an entire generation of males wiped out, the children of the Hebrew women of that generation would be assimilated into the Gentile cultures of their fathers. In this case, the enemy of God’s people was the Gentile king.

In Daniel, jealous nobles tricked the Gentile king, first Nebuchadnezzar, then Darius the Mede, to issue decrees that would result in the Hebrew youths’ death in the fiery furnace, or Daniel’s death in the lions’ den. And Haman’s scheming in Esther took advantage of an unwitting Gentile king to commit genocide on the Jews, even in their homeland, effectively wiping them out as a people. The most recent attempt at genocide was at the hands of the Gentile king, Hitler.

Now Haman, as the enemy of God’s people, is an Agagite (Est 3:1). Agag, it turns out, was king of the Amalekites (1 Sam 15). God had sent King Saul on a mission to completely destroy the Amalekites, but instead, Saul kept their king, Agag, alive. God decreed their destruction because of what Amalek did to Israel, how he ambushed him on the way when he came up from Egypt (1 Sam 15:2).  What happened between Amalek and Israel when Israel came up out of Egypt?

As Israel was on the way to Sinai, Amalek came out and fought with him. But Amalek did not at first meet Israel man to man, army to army: they lay in ambush for them, and attacked their rear ranks, slaying the weak, vulnerable, tired, and weary, old and young who were lagging behind (Deu 25:17-19). This was the occasion that caused Israel to turn and do battle with him, man to man, army to army. This battle was the famous one, in which as long as Moses kept his arms lifted, Israel prevailed, but when he grew tired and his arms dropped, Amalek prevailed; and so Aaron and Hur (Miriam’s husband) held up his arms until Joshua had completely routed Amalek (Exo 17:8-16). At that time the LORD said:

Then the LORD said to Moses: “Write this for a memorial in the book and recount it in the hearing of Joshua, that I will utterly blot out the remembrance of Amalek from under heaven.” Exo 17:14

The prophecy of Balaam names Amalek as the first among the nations, who will be the last among the nations until he perishes (Num 24:20). Amalek was the grandson of Esau (Gen 36:12), the grandson of the man who swore to kill his brother Israel. But Amalek was a people before Esau, for the kings in league with Chedolaomer king of Elam attacked the Amalekites in the land of Canaan before they defeated the king of Sodom and took Abraham’s nephew Lot captive (Gen 14:7). This is the first mention of Amalek in the Scripture.

This is a curious thing: Amalek is obviously an ancient people, but his name does not appear in the Table of Nations, among the descendants of Noah and his sons (Gen 10), which lists all the forefathers of the nations.

I looked up “Amalek” in Strong’s, and they say it means, “dweller in a valley,” but melech in Hebrew is “king”, am is “people.” King of the peoples, or nations, or, perhaps, first among the nations (Num 24:20)? Like Melchizedek, here we have a man, without father or lineage, who makes war on Messiah’s people until he himself is the last to be destroyed. He is a type of antimessiah, and in Esther, his descendant has once again determined to kill God’s people and wipe them off the map.