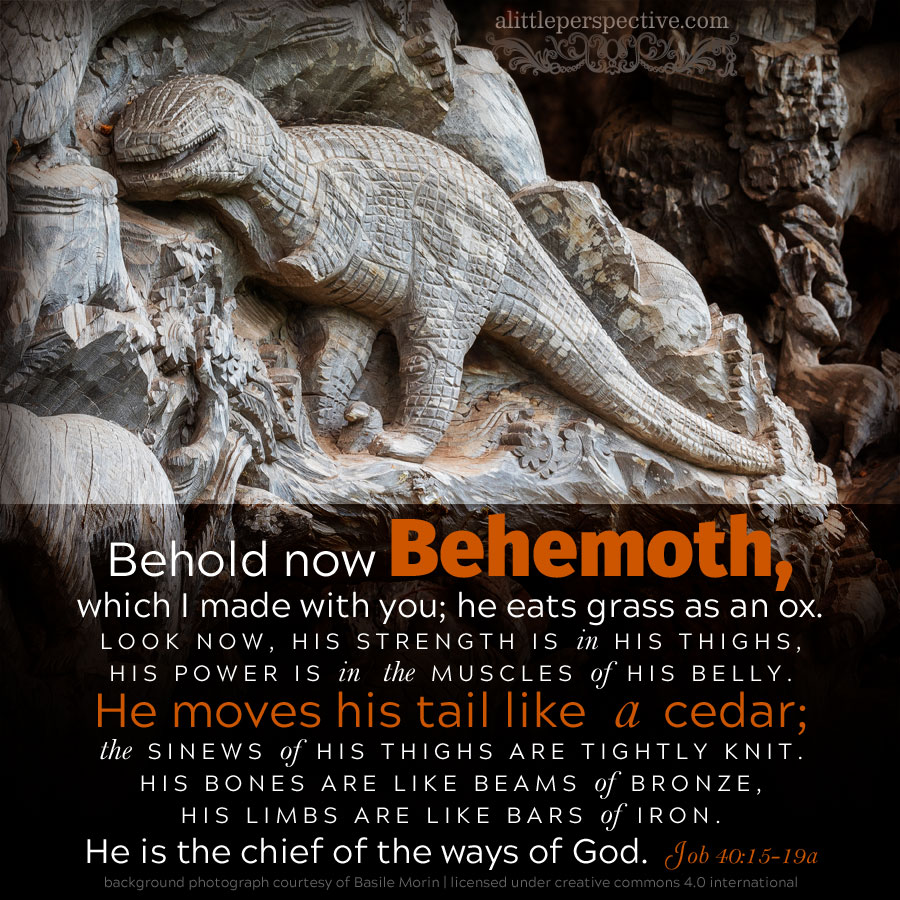 Behold now Behemoth, which I made with you; he eateth grass as an ox. Job 40:15

Strong’s H930, a concrete noun of uncertain description, used in a singular sense; plural of Strong’s H929, behemah, a concrete noun meaning, “beast;” from an unused, unnamed primitive root. Since there is no 3-letter root listed, we cannot discover the parable.

A beast, so called from being unable to speak, used of large land quadrupeds … as opposed to birds and reptiles.

The Lexicons say it must refer to an elephant or hippopotamus, the largest land quadrupeds currently existing. But YHVH said:

He eats grass like an ox, i.e., a herbivore;

His core strength is in his hips and stomach muscles;

His tail moves as a cedar tree, that is, thick and long;

With bones and limbs as beams of bronze and bars of iron;

Is there such a creature in the historical record? Yes! Sauropods, according to the Britannica,

In terms of mass, Earth’s largest mammal is the blue whale … Weighing approximately 136 metric tons (150 tons) and growing to a length of more than 30 meters (98 feet), it is also the largest animal that ever lived. But growing conditions are different in the ocean. What about the largest land animal? Today the elephant holds the title, but if we reach back into history, we can find even larger creatures. Many of the dinosaurs of the Mesozoic Era (about 252 million to 66 million years ago) were longer and more massive than modern elephants, hippopotamuses, and rhinoceroses. The largest dinosaurs of the era were the sauropods, a collection of four-legged herbivorous species that possessed long necks and tails.

We know from the Scriptural record that the earth is not 252 million years old, and if behemoth is to be identified with a sauropod, as I believe he is, then he existed during Job’s lifetime, after the Flood. YHVH gives further evidence of this when He says,

That is, on the sixth day God made land-dwelling beasts and man alike (Gen 1:24-27). If Behemoth was extinct in Job’s day, there would be nothing to behold, and God would not be making the point of His majesty in Creation by extolling the features of an unknown animal, leaving Job and his friends scratching their heads.

But there is proof of his existence with humans in the stone and clay sculptures, artifacts, cliff paintings, and wood carvings of ancient man. The example above is from a carved tree in the garden of the Buddhist temple of Haw Phra Kaew in Vientiane, Laos. Note the tail as a cedar tree, very unlike the elephant or hippopotamus.